It’d be wrong to say that the relationship between Google and Mozilla is in dire straits since the release of Google’s Chrome browser, but certainly, things have become more strained. When Google announced Chrome in September, just a week after re-upping their contract with Mozilla through 2011, we wondered why Google would “start from scratch with their own offering rather than just put more effort into supporting Mozilla.”

They key, of course, is control. Chrome, as we have discussed in recent posts, is an important part of their 3-pronged Web OS strategy. Along with Gears (offline data store) and Native Client (local CPU resources for web apps), Chrome gives Google a compelling platform for the delivery of web applications. It makes sense that Google, who is in the business of selling web applications, would want to control that entire experience.

However, it is potentially coming at the expense of their relationship with Mozilla. We’ve guessed that once extensions arrive on Chrome, Firefox will likely suffer at least a minor blow in terms of user adoption, as more than a few early adopters will be inclined to switch. And just over a week ago, Google dropped Firefox in the Google Pack in favor of Chrome.

Mozilla CEO John Lilly told ComputerWorld in an interview that his organization’s relationship with Google has been at least a little bit strained since the release of Chrome.

“We have a fine and reasonable relationship,” Lilly said. “But I’d be lying if I said that things weren’t more complicated than they used to be.” 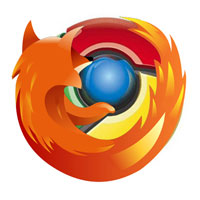 The vast majority of Mozilla’s revenue — 88%, or about $60 million/year — comes from its search advertising deal with Google. It’s unlikely that Google would walk away from that, but now that Google has become a competitor, Mozilla isn’t counting on that revenue stream being there forever.

“Our goal is to be an advocate for the Web for 50 or even 100 years, and you can’t depend on any one organization,” Lilly told ComputerWorld. “Our [current] three-year agreement is the longest we’ve ever had. This is a longtime horizon, so we don’t have to do anything super soon. But in the next three years, we can continue to build [new] products and develop [new] revenue streams.”

Of course, that’s also smart business. Clearly, though, Google and Mozilla aren’t quite as close since Google decided to become a direct competitor to the world’s #2 browser maker. Lilly told ComputerWorld that Mozilla plans to collaborate and work with Google, but they also plan to compete. In the end, that’s a very good thing for users, as long as Mozilla stays afloat.

The Dos and Don’ts of Relationship MarketingJoshua Kraus