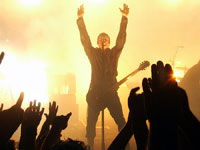 In March, Kevin Kelly published a long post on his blog detailing his theory that to survive as a long-tail content producer you have to cultivate 1,000 “true fans.” Trent Reznor, the musical legend at the helm of Nine Inch Nails, is hardly a long-tail content creator — you kind of have to forgo that moniker when you have had four platinum albums in the US, and two that have peaked at #1 on the charts. But even so, Reznor has come to embody Kelly’s true fans theory since his split with Interscope Records last year.

According to Kelly’s theory, in order to succeed in the long tail, you have to gather about 1,000 true fans (the number varies depending on what sort of content you’re creating — it may be more for an author than for a musician, for example). True fans are people who will do anything to own a piece of your creations.

They will drive 200 miles to see you sing. They will buy the super deluxe re-issued hi-res box set of your stuff even though they have the low-res version. They have a Google Alert set for your name. They bookmark the eBay page where your out-of-print editions show up. They come to your openings. They have you sign their copies. They buy the t-shirt, and the mug, and the hat. They can’t wait till you issue your next work. They are true fans.

Once you have that group of core supporters, you can make a living creating and selling directly to them, says Kelly.

Earlier this year, Reznor released his first album since splitting with a major label, Ghosts I-IV, independently via the Internet. The first part of the album Reznor gave away as a free download, with the full album available as a $5 download, a $10 double CD, or even more expensive “deluxe” packages that included things like vinyl copies, signed art prints, and Blu-Ray discs. The “deluxe” packages were aimed squarely at Reznor’s true fans and sold out in short order, earning the artist at least $750,000 in the first three days. Not too shabby.

Later, Reznor gave another album away completely for free under a Creative Commons license and asked fans to remix it. Clearly, Reznor wasn’t going to make money from this second new album’s release, but it was definitely a good way to please his core group of fans and build awareness about his music and 2008 tour. (There’s a lot of value in awareness, and Reznor knows this.)

According to Mike Masnick of Techdirt, innovative album releases isn’t the only way that Trent Reznor has been cultivating his true fan user base. Prior to leaving Interscope he would hide USB keys in the bathrooms at his shows with songs from his new album on them. Lucky fans who found the thumb drives would generally upload the songs to the Internet, which helped build buzz for the new album. More recently, Reznor has been hiding concert tickets around Los Angeles and then putting up clues and coordinates on his web site and letting fans race to find them. (Which brings to mind images of a goth version of It’s a Mad Mad Mad Mad World.)

Certainly, Reznor had a lot of help from the labels along the way in establishing himself and building up those core fans. So it’s hard to say that there is no longer a place for the labels (a topic we’ll explore more in depth in a future post). However, since parting with Interscope, Reznor has become sort of a poster child for Kevin Kelly’s true fans theory, and he’s continued to innovate new ways to connect with his true fans and grow their ranks, and done so with much success.

The lesson here, though, is that Reznor’s blueprint can work for any content creators that exist in the long tail. From music to novel writing to web applications, if your goal is to make a living from your craft, it may be possible to do so by cultivating a group of “true fans.”