What Facebook did was officially launch Connect to the public. We described Connect in July as a second iteration of their failed Beacon ad platform — done right (from a user perspective) the second time around. Connect is essentially a unified login platform that allows third-party sites to access Facebook user profile and social graph data from outside the social network. In essence, that means that Connect extends the Facebook platform outside of the social network’s walls, but it comes with the user privacy controls that Beacon was sorely lacking.

Connect won’t directly make Facebook money, which some might argue is the main thing the company should be focusing on right now, but it’s nonetheless a brilliant move. As we wrote in July, “Facebook realizes that the more people and web sites that come to rely on their API, the more they will become deeply ingrained in our web habits and experience, and that will put them in a better position to make money.” (Om Malik has some good ideas about how they’ll do that.)

What makes Connect so special, is that there is a very real possibility that it could beat competing single sign-on and data share platforms like OpenID, Google Friend Connect, and Windows Live ID. A few months ago, my friend Sarah Perez articulated why in a post at ReadWriteWeb. According to Perez, Facebook Connect wins because everyone is already using it, and they’re already invested in it. Most people don’t have social graph data at Google, most people still don’t understand what OpenID is. But “login with Facebook” makes perfect sense, and if it means a richer experience on the other end because a trusted site has access to your social data, all the better. 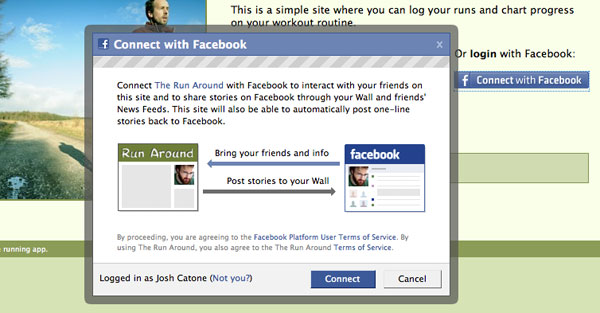 Rafe Needleman echoed those sentiments last week on CNET. “Because Facebook Connect is not just a registration system, but also a marketing channel with a built-in audience of 130 million monthly active users (according to Facebook), this program will crush competing registration systems,” he wrote. “Sites will adopt Facebook Connect for two reasons. First, their users are already actively using it; millions of users have OpenID log-ins and don’t even know it. And second, because it’s not just a registration system, it’s that marketing channel. Self-interest (on the part of site owners) wins over philosophy. Facebook gets that. That’s why it wins.”

According to Facebook Senior Platform Manager Dave Morin, initial tests of the system found that users were logging in via Facebook Connect over their pre-existing login credentials at a 2:1 ratio. Early real-world results have nearly borne that out.

Inside Facebook reports that after adding Facebook Connect as a login option, new users of Govit.com are choosing to login with Facebook 58% of the time. Govit founder Taylor Norrish told Inside Facebook that he thinks Facebook Connect is actually driving registration of new users. That’s a powerful statement that we’re sure other developers will pay attention to. As Needleman wrote: self-interest wins.

It’s Not All Roses

However, there are some very real concerns surrounding Facebook Connect. As Perez articulated in July, even though on the surface things look a lot better than Beacon this time around, there are potential privacy issues to be aware of. “As more of the corporate and business-oriented web adopts Friend Connect, the greater the chance for privacy intrusion,” she wrote.

Facebook founder Mark Zuckerberg has often said that providing powerful user privacy controls is a central theme for Facebook, so hopefully the company will be hyper-sensitive to privacy issues when it comes to Connect.

The other concern, the more menacing one, of course, is whether it is really a good thing for one company to be so embedded into the fabric of the Internet. “Facebook is trying to replace all logins with their own, and control the creation, distribution and application of the social graph using their proprietary platform,” says Chris Saad, a backer of OpenID. That’s a scary proposition, according to him.

If Facebook Connect does win, it might mean that Facebook is basically alone at the helm controlling our entire social experience across the web. Is that something we want?

Last May, while writing for ReadWriteWeb, I came to the conclusion that Facebook would become the mainstream everything. New services and innovations that excite early adopters, would eventually reach the mainstream via Facebook.

I also guessed at the time that “mainstream users, by and large, are fine with their data staying in one place.” That was (and is) probably true. But now, Facebook is attempting to teach mainstream users why data portability is such a great thing — however, they’re doing it on their own terms, and controlling the process all the way through.

Facebook has figured out a way to take the ideas of the Open Web and bend them to their own benefit. It’s brilliant and a little bit scary.

What are your thoughts? Let us know in the comments.