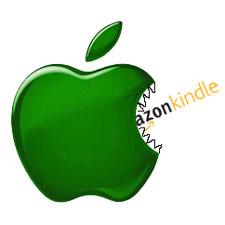 In August we wondered if the iPhone could kill Amazon’s eBook reader juggernaut, the Kindle. We noted predictions from Citi analyst Mark Mahaney that the Kindle would sell just shy of 400,000 copies by year’s end, due to a strong 4th quarter where it is expected to garner “must-have” status on many a Christmas wish list. Mahaney guessed that the Kindle would be Amazon’s iPod — or in other words, it would do for eBooks what the iPod did for MP3s.

Unfortunately for Amazon, it looks like it might actually the iPod (and iPhone) that will do for eBooks what the iPod did for MP3s.

jkOnTheRun points to a report in Forbes that indicates that Stanza, a free eBook reader application for the iPhone and iPod Touch has already been downloaded over 395,000 times, and is getting 5,000 downloads per day. That would make the iPhone + Stanza the leader in electronic book reader market share — and consider that in our August story we mentioned two other iPhone eBook readers (the free eReader and the pay Bookshelf), so the number of book readers on the iPhone is likely higher.

The iPhone + Stanza combination has some distinct advantages over the Kindle. First, the iPod Touch beats the Kindle on price — the cheapest iPod Touch (8GB) retails for $130 less than the Kindle. Second, the iPod has a full featured web browser, all those third-party applications, and is being touted as a next-gen handheld gaming device. Third, it’s also arguably better for audio books, since the Kindle can’t fit in your pocket. Fourth, the iPhone, of course, makes phone calls.

One of the biggest advantages that the Kindle has over the competition may be in danger of evaporating. Amazon’s biggest advantage over other eBook readers is the huge library of new releases that users have access to. The Kindle sales page notes that there are, “More than 180,000 books available, including more than 98 of 112 current New York Times® Best Sellers.” That’s something Stanza can’t offer, but according to Forbes, the company behind the iPhone app, Lexcycle, is working on deals with “several major publishers” to be announced at the beginning of next year.

And so far, it doesn’t seem like the public-domain only caveat is discouraging Stanza readers. Feedbook, the largest distributor of books for Stanza says users have downloaded more than 2 million titles — Amazon Kindle users, who also have access to Feedbooks, have swallowed up less than 40,000 by contrast. (And because Stanza supports just about every eBook format under the sun, theoretically, users could load up content for other eBook stores, like eBooks.com — though getting files onto the iPod can be tricky.)

So the only reason to choose the Kindle over the iPhone/iPod Touch really boils down to experience. If your goal is to read books, then which is better at just reading books? In August, readers here were split on the subject. The main selling point for the Amazon or Sony eBook readers seemed to be a superior screen and a more book-like form factor. But a large number of people thought that iPhone was a perfectly adequate reading device as well, and one that does a lot more than just read books.