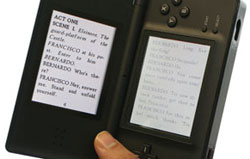 Some analysts think that the the Kindle eBook reader will be Amazon’s iPod device — the must-have gadget that breaks through and becomes a class leader. Citi’s Mark Mahaney, for example, predicted in August that the device would be a Christmas hit and Amazon would sell greater than 375,000 of them this year, including 150,000 during the holiday shopping season. Those numbers might be a bit high given the downward turn that that economy has taken since then, and the Kindle’s rather high price point. Even so, many people are still bullish on the Kindle.

We’ve often wondered, however, if the iPod Touch and iPhone from Apple might just eat the Kindle’s lunch. A free eBook reader application for the iPhone and iPod Touch called “Stanza” is actually the market leading eBook reader, not Amazon’s trendy gadget.

Yet, Apple CEO Steve Jobs doesn’t think anyone reads anymore, and Apple has been starting to market the iPhone as a gaming device.

Now, even as Apple tries to push into the video game market, handheld video game king Nintendo is reportedly about to make a push into the eBook reader market. According to the Times Online, Nintendo is planning to release a £20 eBook collection for its Nintendo DS handheld gaming device in the UK, where Amazon’s Kindle isn’t available, and Sony’s Reader costs about £100 more.

The new addon, called the “100 Classic Book Collection,” is being created along with HarperCollins, a book publisher owned by News Corp. Slated for a December 26 release, Nintendo’s first foray into eBooks is a cautious one. The software will include 100 mostly public domain classic works by authors like Charles Dickens, Shakespeare, Emily Bronte, Jane Austen, Jules Verne, and Robert Louis Stephenson. Additional books can be downloaded via WiFi and if this first collection is a success, the Times reports that Nintendo would consider further collections.

Using existing technology that you already own as an eBook reader is clearly appealing to people, based on the success of the Stanza application on the iPhone platform, and the DS’s dual-screen clamshell design is particularly book-like. The initial book selection is rather boring, but the popular DS could nonetheless resonate as an eBook reader.

As we have written in the past, we think eBook readers could be especially useful in a classroom setting. The $5.5. billion textbook market should be attractive to companies like Apple, Amazon, Sony, and perhaps now Nintendo, and for students, electronic books could be cheaper over the course of years of schooling. There are potential environmental benefits, as well.

Imagine a future where, “Ok class, lets all take out our Nintendos,” is a commonly heard phrase.