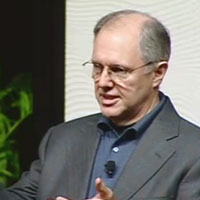 Microsoft Chief Research and Strategy Officer Craig Mundie talked about the company’s vision for the future of computing and the web this morning at the Emerging Technology Conference at MIT. Mundie outlined Microsoft’s plan for a computing future he called the “client + cloud,” which marries computing devices with web-based services.

Said Mundie, the platform of the future will combine the Internet (the cloud) with devices (the client) including desktop computers, laptops, mobile phones, video game players, appliances, and other web-connected devices. The client + cloud computing platform will be characterized, according to Mundie, by a more humanistic, adaptive, and immersive user experience.

The new computing paradigm that Microsoft envisions will seamlessly connect computing devices to cloud services, such as Microsoft’s Photosynth (our coverage), and will use cheap sensors to make applications that are more context aware, personalized, and that recognize speech, vision, and gestures as common input methods.

Mundie used a Microsoft Surface computer to demo his ideas, showing how in the company’s planned vision one could move from a photo of a magazine snapped on a mobile phone, to an online version of that magazine, to a 3D virtual representation of a real-world scene launched from a photo in the magazine. Mundie showed off a very Second Life-esque future web in which real-world locations were rendered in 3D online (via Photosynth data) and could be interacted with for informational or commercial purposes. 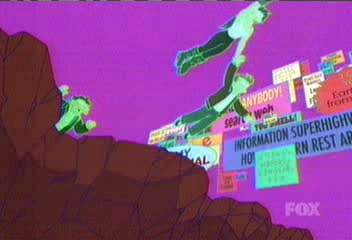 The whole thing kind of reminded me of the future of the Internet comically depicted in a 2000 episode of the cartoon Futurama, in which everything was a virtual, 3D representation of the real world. Microsoft sees a future where the computing power of local clients draws on information and services in the cloud to create powerful, personalized mashups; what Microsoft calls the “spatial web.”

In what was perhaps a more compelling demo, Mundie showed a video of a woman in Seattle looking at a live scene through the camera on an ultra mobile pc device. On screen, the client was pulling data from a web based service to tag items in the scene — the names of buildings, the number of public transportation buses, information about how far away taxis were via GPS, etc. That’s the sort of useful, real world application that makes Microsoft’s vision of the future exciting.

Microsoft’s vision differs from that of rivals such as Google, in that rather than putting all software and services into the cloud and delivering them over the web to dumb clients, Microsoft feels that the client device still needs to do some processing. “I contend it makes no sense to try to push [lots of data and processing] up the wire [to the cloud, just] so that it can come back and talk to you,” Mundie told Technology Review this morning. “And so, ultimately, that leads us back to what I call this composite platform, where you’ve got a balanced set of roles between what you expect the cloud to provide and what you expect the clients to provide themselves.”

However, Mundie conceded, the killer app for the next generation of computing platform has yet to be created. And, he said, it is the applications that make people choose a platform, not any of the underlying infrastructure. That’s especially true in the early days of a new computing paradigm, and so whoever creates the dominant platform that delivers the client + cloud computing era will depend on who creates the killer app for it.