If the rebirth of JavaScript has been the biggest theme of the past two years, you could probably divide most of the talk surrounding this topic into two main areas.

At the geekier end of town, we’ve seen smarties harnessing JavaScript to do all sorts of amazing — and occasionally ridiculous — things with Ajax.

However for front-end guys like myself, much of the scripting fizz and bubble has been focussed around refitting your markup — that is, using JavaScript to make your markup work better after it gets to the browser. Long-time readers of the Design View newsletter will probably remember a few of my own experiments along these lines over the past few years:

Although each of these scripts has quite a different purpose, they all involve sending neat, semantic markup to browsers, and using JavaScript either to fix or extend the abilities of those browsers that are smart enough to understand. In most cases, this involves "wrapping" some part of your markup in some more markup. Today we’re going to look at an easy, all-purpose method that will allow us to do this anytime, anywhere: jQuery.

So, What Is jQuery?

jQuery is yet another JavaScript library to join the already crowded space that includes Prototype, Scriptaculous, Rico, Moo.Fx and more than a dozen others. To use it, simply attach the .js file in the head of your page: magically, you have access to lots of pre-built functions and gizmos.

Q: Why would you possibly want another arcane JavaScript library to deal with?
A: The key attraction of jQuery is what it can offer you within the first 10 minutes of your using it.

A while back, we spent some time improving the way in which SitePoint’s Marketplace operates. While looking for an elegant way to allow sellers to display large screenshots, statistics, graphs and other images without leaving the main auction page, I came across Cody Lindley’s Thickbox, which is powered by John Resig’s jQuery JavaScript library. The image below shows the Thickbox in action. 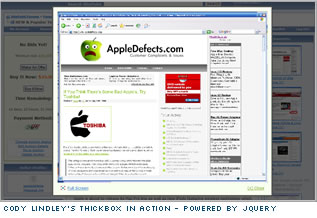 After only five minutes of toying with Thickbox, you’ll begin to see its potential. In the Marketplace, I was able to pull both linked images and full HTML documents through to the Thickbox window, while simultaneously dimming (but not losing) the launch page. Users with browsers in which JavaScript is disabled or unavailable are simply taken directly to the item (that is, the image or page). It’s a very clever, usable, and accessible solution to the "enlarge this thumbnail" problem.

However, since we’d already decided to include the jQuery library in the page (it’s tiny — about 10kB), I thought it would be a good idea to find out what else it could do for us.

An hour later, I was a jQuery convert.

The true beauty of jQuery is its simplicity. Single lines of jQuery code can replace a dozen lines of normal JavaScript, yet it remains very elemental and flexible. Let me illustrate this point with an example. In my "horizontal rules fixer" from two years ago, we used the following script:

As a quick summary of this code, the browser waits for the page to finish loading before rifling through the DOM to locate each occurrence of hr. Each time it finds one, it creates a new div, gives it the class name "line", inserts it where the hr was, and pops the old hr inside the new div, to achieve the markup required to implement this particular effect. Semantic pedantry aside, the end result of this script was that we were able to achieve the desired result without having to change hundreds of pages.

At the time, I thought it wasn’t a bad result for 12 lines of code. But let’s look at how we’d achieve the same result using jQuery.

I kid you not.

To break it down (not that there’s much to break):

The first and third lines are jQuery’s load event, and they replace the old window.onload from above. Any task that we wish to complete during the loading of the page can be dropped inside these curly braces.

This is a great improvement on the old onload method, because rather than waiting until everything has finished loading, jQuery’s function watches everything that comes in, and starts working as soon as it has all the parts it needs. It’s really very neat.

Remarkably, the second line is even simpler:

The "dollar object" — $("hr") — is all we need to tell jQuery to grab every horizontal rule on this page, and wrap is what we will be doing to those hr elements.

jQuery’s built-in wrap function takes in whatever HTML we give it (in this case "<div class='line'></div>") and wraps it around each hr in our page — no loops or tests required.

We’ve used a div here, but we could just as easily been modifying or wrapping a b, span, or a element.

And although we’ve used a very simple selection rule here (all hrs), we could have easily been much more specific with what we targeted. Using familiar old CSS syntax, we could have used any of the following:

While I’ve personally found wrap to be of the most instantly useful jQuery functions, it’s just one of many, including hide, show, fadeOut("slow") and slideUp("fast"), just to name a few. You can probably guess what each one of these functions does. The jQuery starter’s tutorial on the jQuery site is quite a gentle beginner’s guide, and takes you through some of the most common functions.

But perhaps jQuery’s single neatest feature is its ability to "chain" functions together. In other words, if I wanted to add a second div to our hr elements for some crazy reason, I could simply add another call to the wrap function to the end of my code, like this:

The Sell Your Site section of the Marketplace gives you another example of where this might come in handy, as demonstrated below. 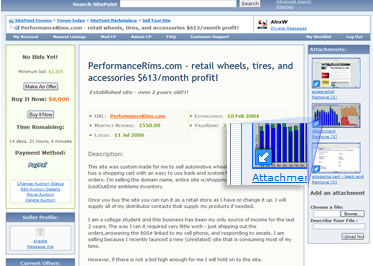 When we were developing this page, I wanted to add a small icon to the bottom corner of each thumbnail. This required each img element to be wrapped in a container div, and another div showing the icon to be positioned in the container div.

Again, the jQuery code is just one line (I’ve split it here because we have limited column width to work with).

In plain English, this code simply asks jQuery to:

Now that we have the structure, CSS does the rest.

Of course, if JavaScript is turned off, the thumbnails link directly to the raw image files, and there’s no need for the icons. Now that’s what I call elegant degradation.

Like most other JavaScript libraries, jQuery is capable of some very high-end tricks (we’ve covered its Ajax features in a previous article), but the biggest attraction for me was its ability to solve the little problems quickly and with a minimum of fuss.

As you can probably tell, I’m a big jQuery fan already. I hope you’ll find it useful too.

And of course, if you’re expanding your JavaScript horizons, don’t forget to upgrade to the latest version of Joe Hewitt’s Firebug extension, which is now the undisputed king of JavaScript debuggers.

This article was originally published in Design View #23. 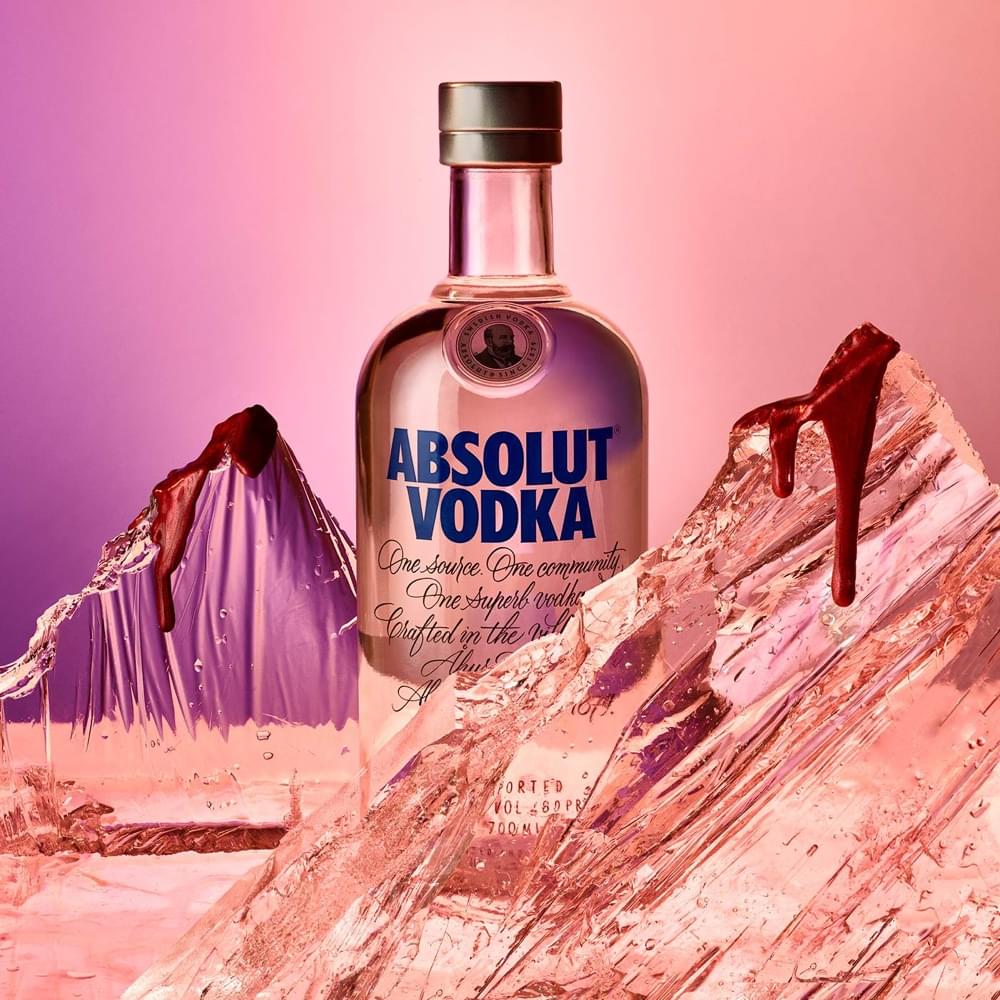 An Introduction to jQuery for DesignersTara Hornor