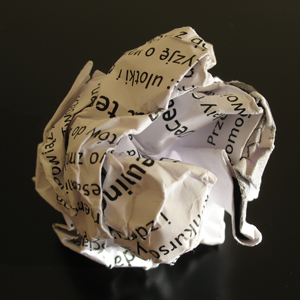 Mistakes are inevitable. Whatever you do and no matter how good you are at what you do, you will eventually mess up. You’ll recover from it and put it behind you, but it will happen again. It may not be for a long time, but through the course of your career, you will have at least a handful of smudges on your record.

No one likes making mistakes, but it’s part of a meaningful life experience…and as much as they stink, every mistake teaches us a valuable lesson, if we choose to learn it.

The good news is that it’s not the mistakes that define you; it’s how you handle them. So while the missteps you make may be unanticipated, unplanned and unwanted, you can regain some control by responding in a positive way and preventing one isolated mistake from turning into a full-blown disaster.

Here are some things you may want to do the next time you make a mistake.

One of the worst things you can do when you make a mistake is point a finger at someone else. Not only does this make you look like you’re skirting your responsibility, but deflecting ownership of a mistake will put someone else undeservedly in the hot seat. It also puts the brakes on resolving the problem because the source of the issue (you) is now out of the loop. This essentially worsens the impact of the mistake.

As soon as an error is brought to your attention, accept your responsibility in the situation, whether it could have been avoided or not. Then start to look into it and what needs to be done to rectify the situation.

Even if you have a solid reason for the mistake, it doesn’t take away the fact that you made the mistake to begin with and any ramifications it may have had on others involved are not erasable. Offering up justification is just like assigning the blame to someone else, prolonging the situation and not solving anything.

This isn’t to say that you shouldn’t provide background on why the blunder occurred when necessary, but don’t let the reasoning be your primary method for acknowledging the mistake.

Once you’ve acknowledged the mistake and have taken ownership of the situation, it’s time to fix it. Make it a top priority and do it immediately. If other people played a role in causing the slip-up, you will need to rally the troops to work on the resolution. The key is to make it right as quickly as possible.

It’s not enough to fix the mistake, though. You should take time to examine the cause, the impact it had, and how the same mistake can be avoided in the future. And keep in mind that every mistake is a valuable opportunity for self-improvement. Embrace the lesson learned, let it make you better at doing something and apply it going forward.

The mistake has been made, acknowledged, fixed and learned from, but if you have any desire for perfectionism lurking in your psyche (like I do) then it may be hard to move past the mistake and get on with life. Realize that mistakes are inevitable and underneath it all they really can be beneficial. And you’re human…just let it go.

How do you rebound after making a mistake?