It’s that time again. Firefox 14 is officially an ‘old’ browser; it’s time to welcome Firefox 15 to your PC.

I liked version 14. Improvements had been coming steadily, but this release felt more stable and slicker than before. Bar a few minor Flash quirks, everything worked well. Can Mozilla build on that success? I think they have — especially if you’re a web developer…

Ooo — a cool new feature! While there are several online and bookmarklet Responsive Web Design tools, Mozilla is the first vendor to build a viewer directly into the browser (menu > Web Developer > Responsive Design View):

A range of typical resolutions can be selected or you can drag the (hard to see) resize control at the bottom-right of the box. It’s simple, yet effective. You’ll never need to resize the whole browser window again.

A box layout view has been added to the page Inspector (menu > Web Developer > Inspect, then click the blue bar in the bottom right): 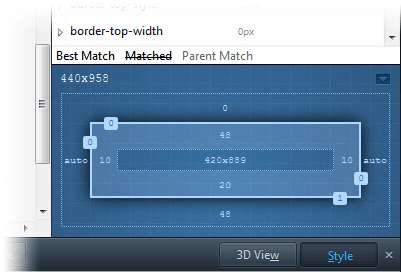 The graphic indicates the widths and heights of the box, padding, borders and margins. It’s a feature available in Firebug and several other add-ons, but it’s useful to have it in naked Firefox installations.

To be fair to Mozilla, their Venkman debugger has been available for over a decade but development halted several years ago. Again, JavaScript debugging is available in Firebug but the native alternative is likely to be faster — especially if you’re only concerned with scripting issues.

Unfortunately, the debugger does not work correctly yet. It’s fine if you apply breakpoints to timer functions and event handlers, but it disappears and wipes your settings as soon as you refresh the page.

I’ll revisit the feature in v16 — especially since remote mobile debugging will be implemented.

Firefox 15 may be the last update you ever know about. From this point forward, all updates will occur in the background à la Chrome.

This is good news for developers: most Firefox users will migrate to the latest version quickly and painlessly. Systems administrators may be less pleased; a new version could break a mission-critical application — although automatic updates can be disabled.

I just hope it’s a little more efficient than Google’s updater which can hog slower machines for 10 minutes or more.

Still feeling underwhelmed? Perhaps one of these improvements will put a smile on your face:

Firefox 15 is a great update. Mozilla may have lost ground to Chrome, but Firefox remains a capable browser which improves with every release. I wouldn’t want to develop web code without it.

Firefox 15 is available for Windows, Mac and Linux PCs. You possibly have it already but, if not, head over to getfirefox.com.