While admittedly the concept comes from the empirical field rather than academic, it applies quite well to the pragmatism of the real world – most software applications behave pretty much like whimsical babies with an unavoidably “tendency” to grow in size and complexity over time. There’s nothing inherently wrong with having babies growing up healthy here and there, but the situation can be radically different with applications, especially when they become bloated, twisted monsters having little to do with the sweet, tiny creatures they once were.

The problem isn’t growth per se, as having a future-proof application spreading its wings wide toward further horizons can be a sign of good design. The real issue is when the expansion process is achieved at the expense of redundant boilerplate implementations of things scattered throughout different layers. We’ve all been there (mea culpa) and we all know that logic duplication is a serious software disease.

Even when well-trusted programming techniques help strip out duplicated logic, sometimes they’re just not enough to fix the issue by themselves. A clear example of this is MVC; the model (the Domain Model, not the obtrusive, catch-all database one) does its business in relaxed isolation, then the skinny controllers grab the model’s data through a mapper or repository pass it on to the view or any other output handler for further rendering. The scheme may deliver, but it doesn’t scale well.

Say the model data should be massaged in some additional manner and interfaced to an external API such as Facebook, Twitter, a third-party mailer, you name it, at multiple places. In such cases, the whole massaging/interfacing process is application logic from top to bottom, hence the controllers’ responsibility. Before you know it, you’re forced to duplicate the same logic across a bunch of controllers, thus putting your toes on the forbidden terrain of logic duplication. Busted!

If you’re like me, you’re probably wondering how to tackle the problem without hitting your head against a brick wall. In fact, there’s a few approaches that do the job quite well. There’s one in particular I find appealing because it plays nicely with Domain Models, and therefore with Domain-Driven Design. And what’s more, if you’ve peeked at the article’s title, you’ve probably guessed I’m referring to Services.

What is a Service?

A services is an abstraction layer placed on top of the domain model which encapsulates common application logic behind a single API so that it can be easily consumed by different client layers.

Don’t let the definition freak you out, as if you’ve been using MVC for a while the chances are you’ve used a service already. Controllers are often called services, as they carry out application logic and additionally are capable of interfacing to several client layers, namely views. Of course in a more demanding environment, plain controllers fail short in handling several clients without the aforementioned duplicating, so that’s why the construction of a standalone layer is more suitable in such cases.

Services are real killers when working with enterprise-level applications whose backbone rests on the pillars of a rich Domain Model and where the interplay with multiple clients is the rule rather than the exception. This doesn’t mean that you just can’t use a service for your next pet blog project, because in fact you can, and most likely nobody will punish you for such an epic effort.

I have to admit my own words will come back to haunt me sooner or later, though, as my “naughty” plan here is to create a service from scratch which will interface a domain model’s data, composed of a few user objects, to two independent client layers. Sounds overkill, sure, but hopefully didactic in the end.

The following diagram shows in a nutshell how this experimental service will function at its most basic level: 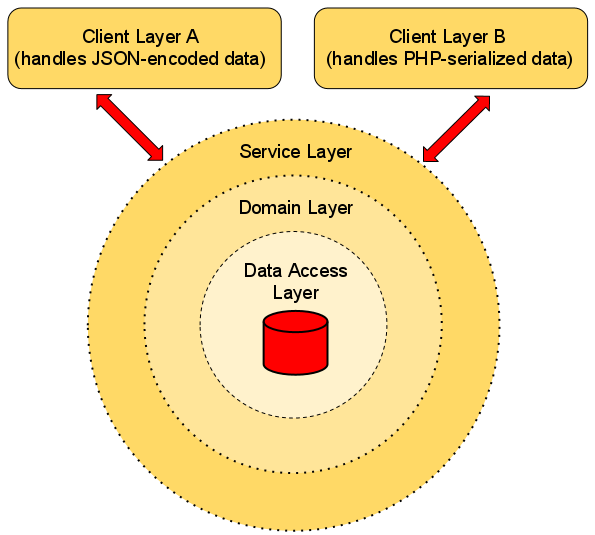 The service’s behavior is rather trivial. Its responsibility can be boiled down to just pulling in data from the domain model, which will be then JSON-encoded/serialized, and exposed to a couple of clients (Client Layer A and Client Layer B). The beauty of this scheme is that the entire encoding/serialization logic will live and breath behind the API of a service class placed on top of the model, thus shielding the application from redundant implementation issues while still leaving the door open to plugging in additional clients further down the road.

Assuming that building the service will flow from bottom to top, the first tier to be built is the the Data Access Layer (DAL). And since the tasks bounded to the infrastructure will be limited to storing /fetching model data from the database, this layer will look pretty much the same as the one I wrote in a previous article.

With the DAL doing its thing, let’s go one step up and start distilling the domain model. This one will be rather primitive, tasked with modeling generic users:

Asides from doing some typical setter/getter mapping, and performing basic validation on the data, the behavior of the AbstractEntity and User classes don’t go any further than that. Regardless, they come in handy for bringing up to life a small, yet clean, domain model which can be tweaked at will.

The model should be hooked up to the DAL in some fashion without losing the pristine independence they have from each other. One straight and simple manner to accomplish this is through the facilities of a data mapper.

Interfacing the Model with the DAL

If you’ve ever tackled the process, you’ll know that building a full-stack data mapper capable of handling multiple domain objects and catching any impedance mismatches on the fly is not a simple task, and in many cases is an effective repellent for even the boldest of coders. But since the domain model here is rather simple, the user mapper I plan to deploy here is pretty straightforward.

Sure the UserMapper class is miles away for being a production-ready component, but it performs decently. In short, it runs a few CRUD operations on the domain model and reconstitutes User objects via its createUser() method. (I’ve left user updates as an exercise to the reader, so be ready for a pinch of extra fun).

Moreover, with the mapper comfortably resting between the model and DAL, the implementation of a service that outputs JSON-encoded data to the outer world should now become a more malleable process. As usual, concrete code samples are hard to beat when it comes to further elaborating this concept. So, let’s now build up the service in a few steps.

There’s a general consensus, which goes along the lines of Fowler‘s and Evan‘s thoughts that services should be thin containers wrapping only application logic. Business logic, on the other hand, should be shifted to inside the boundaries of the domain model. And as I like to stick to the clever suggestions that come from the higher-ups, the service here will adhere to these.

Having said that, it’s time to create the service layer’s first element. This one is a basic interface which will enable us to inject different encoder/serializer strategies into the service’s internals at runtime without amending a single line of client code:

With the above interface in place, spawning a few implementers is really simple. Moreover, the following JSON wrapper proves why my claim is true:

If you found easy to grasp how the JsonEncoder does its thing, make sure to check the one below which sets a naive PHP serializer:

Because of the functionality provided by the encoder and the serializer out the box, the implementation of a service that JSON-encodes and serializes model data can be now embraced with confidence. Here’s how this service looks:

At a glance, it seems the UserService class is irreverently sitting on the user mapper with the sole purpose of eating up its finders or acting like a plain repository. But in fact it does a lot more than that, as its fetchByIdEncoded() and fetchAllEncoded() methods encapsulate in one place all the logic necessary for encoding/serializing model data according to the encoder passed in to the constructor or setter.

While the class’ functionality is limited, it shows in a nutshell how to build a service layer that mediates between the model and a couple of clients which expect to get in data in a specific format. Of course I’d be a jerk if I didn’t show you how to finally get things rolling with such a service, So, the example below uses it for fetching users from the database:

Despite a few obvious limitations, it’s clear to see that the service is a flexible component, which not only encodes user objects according to some predefined format, but also allows adding more encoders along the way thanks to the strategy pattern‘s facilities. Of course, its most engaging virtue is the ability for placing common application logic behind a clean API, a must for applications that need to perform a host of additional centralized tasks such as further processing domain model data, validation, logging, and more.

Even while services are still making their first timid steps in PHP’s mainstream (except for some specific platforms like FLOW3 and a few other frameworks that shyly provide a base blueprint for creating services in a painless manner), they’re solid, well-proven solutions in the enterprise world where systems usually rest on the foundations of a rich domain model and interact with a wide variety of client layers.

Despite this rather overwhelming scenario, there’s nothing that explicitly prevents you from sinking your teeth into the goodies of services in smaller, more modest environments, especially if you’re playing around with some core concepts of DDD. So, now that you know what’s going on under the hood of services, feel free to give them a shot. You won’t regret it.

How to Increase the Perceived Value of Your ServicesAlyssa Gregory