Firefox 26 was released last year. Yes, it was on December 10, but that was 2013! Version 27 arrived on February 4, 2014 and you can get it by auto-updating (menu > Help > About Firefox) or downloading a fresh installation from getfirefox.com.

Most users will wonder what the fuss is about. Fortunately, Mozilla has provided developers with some juicy new features…

I like the Firefox tools. They’re not a replacement for Firebug just yet, but they’re fast and ideal for quick and dirty editing. A slew of new features have been added in Firefox 27:

In addition, JavaScript debugging is made easier with DOM event breakpoints. You can set a breakpoint to automatically fire when a particular browser event occurs. Navigate to the Debugger pane, click the Expand panes icon (highlighted) followed by the Events tab: 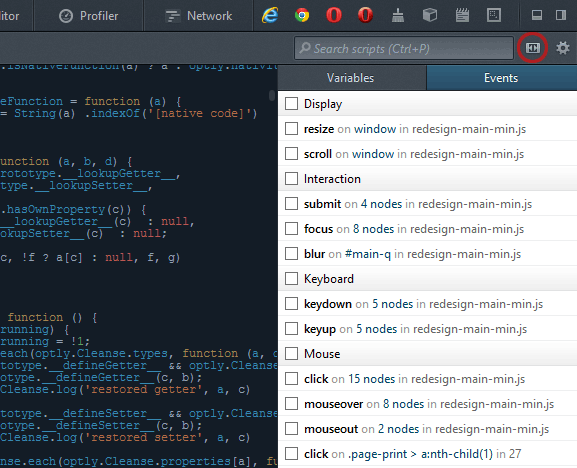 A list of current listeners in the page are displayed. Check any to stop execution at that point.

Firefox 27 now supports the new unset value, which is a CSS-wide keyword that can be applied to any property. When used, it acts as if it were inherit when an inherited value is available. If it can’t find one — for example, if the property is a non-inherited one such as box-shadow — it applies the browser default.

You can use it with the all property (e.g. all: unset;) to apply the value to every property (except direction and unicode-bidi).

Admittedly, I’m struggling to think of situations where this would be useful.

As well as the usual bug and security fixes, Firefox 27 also offers…

The Developer Tool updates alone make Firefox 27 a worthy upgrade. Version 28 will appear in around six weeks and should offer several user-facing improvements such as better Windows 8/8.1 integration.