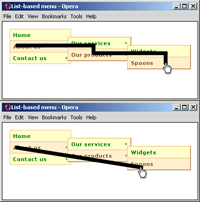 There’s been a lot talk on SitePoint recently about dropdown menus, and not all of it entirely accurate. So I felt the need to chip-in and set the record straight on matters of best-practice, when it comes to JavaScript menus in all their forms.

First, let’s look at the key issues that impact on good usability:

Now those three things together make the difference between a menu that is functionally useable, and a menu that is disastrously unuseable and a nightmare for users to deal with. All three of these things need scripting to implement, and that brings me onto the next crucial questions of implementation and fallback content:

Pure CSS menus are an interesting proof of concept, but that’s all they are. Eric Meyer’s invention of them led the way to our re-thinking how menus should be built in the first place (before then, menus were all built with endless reams of document.written tables and divs; Eric showed how a semantic structure could be converted into a menu), but in of themseleves they are not suitable for real-world production use.

We also need to consider exactly how the show/hide mechanism of a menu should be implemented, in order to ensure accessibility to browser-based screenreaders:

Finally, there are details of the content of menus themselves, and the finer points of design that make for a better user experience:

Before I finish, I’ll make one more point about styles and types of menu. So-called mega menus are not different from what we know as dropdown menus. They have different content and styling in the submenus, and that’s all. Jakob Neilson’s recent piece on the subject has muddied the water by implying that this type of menu is inherently more useable and accessible, but that simply isn’t true. To prove his point he’s comparing aspects of good mega menus with aspects of bad conventional dropdown menus, which is not a fair or scientific comparison, because he’s not comparing like with like. His arguments fall flat when you compare with a well implemented dropdown.

In this short post I hope I’ve clarified what it takes to make a menu, that is useable, accessible, and built with the principles of progressive enhancement in mind. And to illustrate, here are two demos that exemplify all of these points:

These menus, incidentally, are straight out of SitePoint’s JavaScript Anthology, and are fully documented in Chapters 15 and 16, which as you’d probably guess, I wrote!