In this tutorial, we’ll learn to implement Save/Load game functionality in our game. We will begin by saving the necessary player-related data such as the level we’re on, where we are, and our example tutorial statistics. 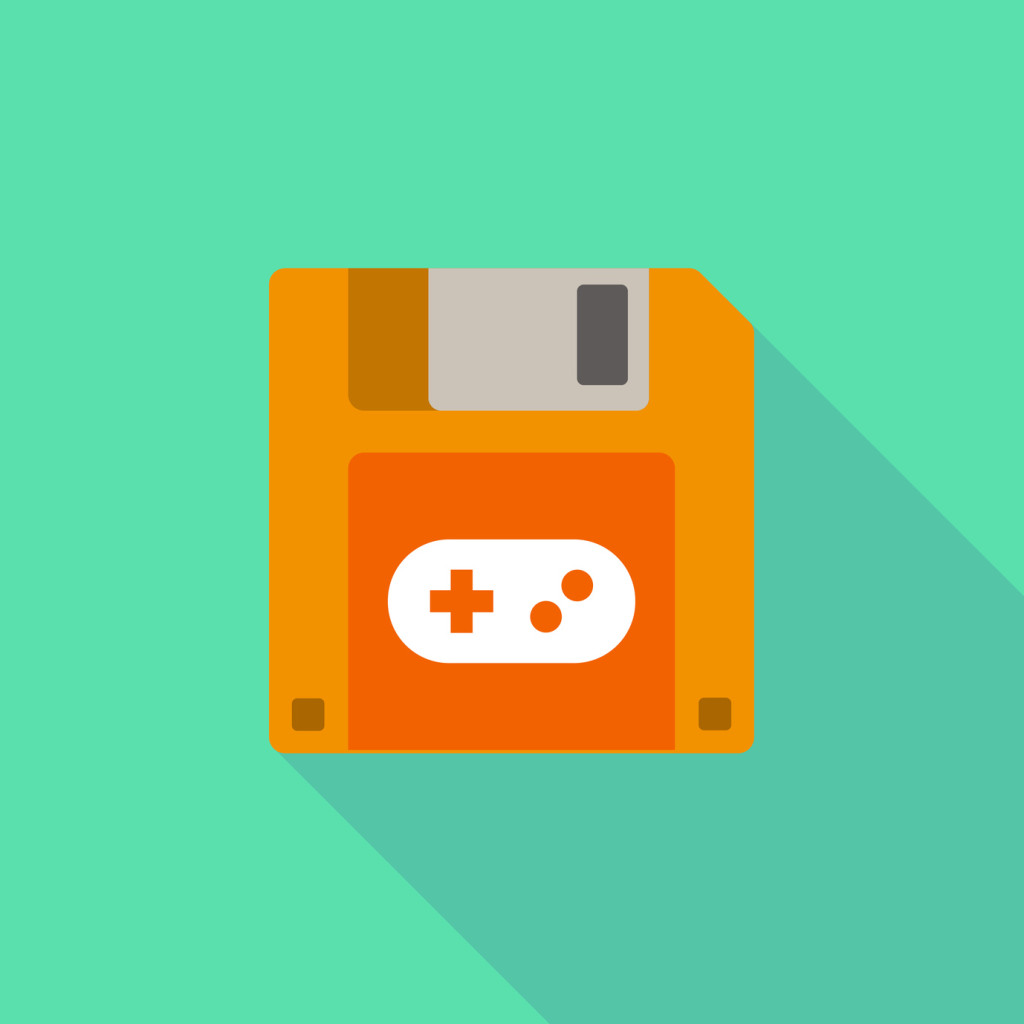 If you need a project for testing, you can use the one at the end of the previous article which dealt with cross-scene saving of data, and it’s perfect for following this tutorial:

If you want to download a finished project, the link is at the end of this article.

For saving the in-game data to a hard drive in a format that can be understood and loaded later on, we will be using a .NET/Mono feature known as Serialization. You can find out more about theory of serialization at the following links:

In short, “serializing” means writing down a .NET object to a hard drive in its raw binary form. It may sound a bit unintuitive, but think of it this way: we’re saving an instance of a class to a hard drive.

You may remember that while finishing up our last example, we wrapped our player’s data into a single class. You may already be able to tell where this is going. Let’s just go over the logic flow real quick:

What do we need to save?

Using the project from our previous example, we will need to prepare some things in order to begin writing this functionality correctly. We need to consider the following problems:

Scene identification? Adding a new Integer variable into our Player’s data package class, so we know what scene the player was on.

Scene position? Unfortunately, we cannot add a Transform or Vector3 object into the Player’s data package class because they are not serializable objects. We need to add three new float values denoting the player’s X, Y, and Z position instead, and apply them to the position vector of the player when we are loading data.

Saving/Loading procedure Keeping it simple for now, we will assign two hotkeys for save and load: F5 and F9 respectively.

Fresh start or load? We will need to keep a boolean value which tells us if the scene has been loaded, or started anew. For this, we need our GlobalObject class which persists between scenes because we will need to load the data and set the variable, before initializing the loading procedure of the scene the player was on when they saved the game.

This may sound a bit disorienting so let’s break this down into a flowchart.

This explains the flow of the program from a PlayerControl class, which is the primary class we’ll be dealing with today. It’s a class that’s responsible for the player’s input: 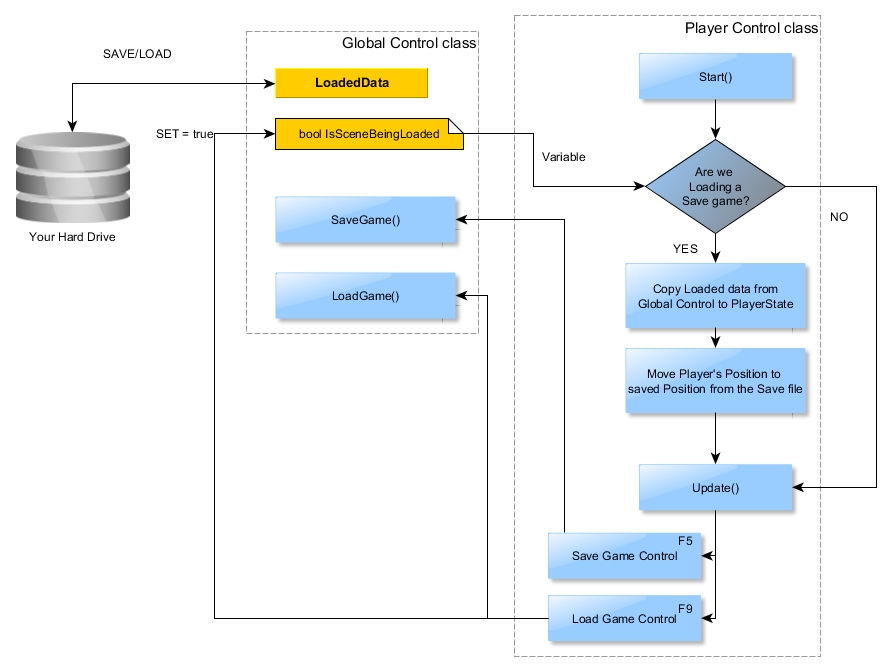 First, we need to solve the two biggest problems as listed above: Scene ID, and position of the player within the scene.

Assuming we have a class that holds our player’s data, like this:

We need to add the following:

Let’s get the obvious out of the way first: We have a custom “attribute” declaration in front of the class: [Serializable]. This tells the Engine that the data in this class is suitable for writing down in binary form, or “serializing”.

We have also added our Scene ID and Position values.

Now, let’s write the functions that will serialize and deserialize data. We need to go into our GlobalObject (or similar object you should have):

OK, this is a lot of code at once, let’s break it down. Let’s first explain the Save function:

While File.Create will create a new file, it will not create the path of directories where the file is supposed to be located. Therefore, if the directory Saves does not exist, an exception will be thrown and the game will not be saved.

This will require adding a new Using namespace above, specifically this one:

Pro-tip: Write “BinaryFormatter” in the code and without pressing Space, Enter or Tab (which will initiate Intellisense completion in both MonoDevelop and Visual Studio), hit Right-click over the declaration and use Resolve -> Add Using namespace.

This will require the following namespace: using System.IO;

The Stream object we will have gotten will create a new file if it doesn’t exist, and overwrite it if it does exist, under a path we have set. For the purpose of the example, we’re using a very simple and hardcoded relative path.

Note: You can also use whatever extension of the file you want, or even no extension at all. It doesn’t matter since no Operating System will open this file, nor is there any program out there that will read this file’s format or requires extension association. We can only read the file if we know the source code of the class from which it was serialized.

We need to fetch a reference to the object we are serializing. In my project’s example, all the relevant player data is contained in an instance of the “PlayerStatistics” class, located within the singleton instance of the PlayerState class.

The above represents the entire difficulty of writing a class in its raw binary form to the hard drive. Ah, the joys of the .NET/Mono framework!

You will notice the Serialize function requires two arguments:

Do NOT forget this!

Seriously, do not forget this.

If we forget to close the Stream object in our code, we will encounter one of the two problems (whichever happens first):

Note how neither of the symptoms actually gives any meaningful information about an unclosed stream.

Instead of using Create, we will be using the Open function to obtain our Stream object. Self explanatory, really.

Note how we are not yet feeding the loaded data into our PlayerState instance.

This is because we first need to load the data to determine what scene the player is on, then we need to load that scene, and then feed the loaded data.

A good place for this example would be the class that handles the player’s input. Within the example project, that would be our PlayerControl class.

Just for this example, we’ll put the following code directly in our PlayerControl class’ Update function, but as development goes on, we’ll need to move this into the part of the code where the player actually has control (when no menus are opened, cutscene isn’t playing, etc):

Now, the Quickload function is a bit different:

First, we use the function to load the data into GlobalControl’s “LocalCopyOfData” instance. After that, we poke it to find which scene the player is saved on.

We set the public boolean variable that says the scene is now being loaded, and initialize the LoadLevel function.

You might be wondering: “We aren’t even copying the player position or PlayerStatistics data, so… why are we doing this?”

If you remember the flowchart from before, in the PlayerControl’s Start function we query the Global Control for this boolean variable, and then copy over the loaded data.

This is because we cannot copy over the data and then load the scene. The data will not be carried over. We also cannot load the scene first, and copy the data in the same function, because anything after the LoadLevel() function will be ignored, since the object and the script are destroyed and a new level starts with new objects.

So, we use a bit of a workaround – we use the GlobalObject, which persists between those loadings, to load our data into the player.

In our PlayerControl Start() Function we need:

As you can see, we copy over the data first and then move the player to the saved location. We also move the player just a tiny amount upwards from the saved position, just to avoid any physics-related errors. After that we set the control boolean to false.

You can now test your in-game saving and loading. Feel free to change the statistics of the player, or traverse to another scene and hit the F5 button. You can now exit the game, restart your computer, it doesn’t matter.

When you turn the game back on, (or are just impatient, you can immediately) hit F9, and continue where you left off!

If you want to get fancy, try to write additional redundancy checks to see if the save file exists or even incrementing save files (so you can always load an earlier save).

If you want to see how the finished demo works or looks like (or if you got stuck somewhere and need help), the project can be downloaded from the following locations:

We have saved and loaded the player’s and relevant info, but what about the rest of the in-game world? What if we have pick ups in the world we want to save? Or enemies we want to stay dead?

This will be covered in a followup to this tutorial, coming shortly. Until then, if you want to come prepared and armed to the teeth with code, look up .NET/Mono’s Delegates and Events.

Questions? Comments? Please leave them below, and don’t forget to hit that thumbs up button if you liked this writeup!