Before starting you can view the game at itch.io 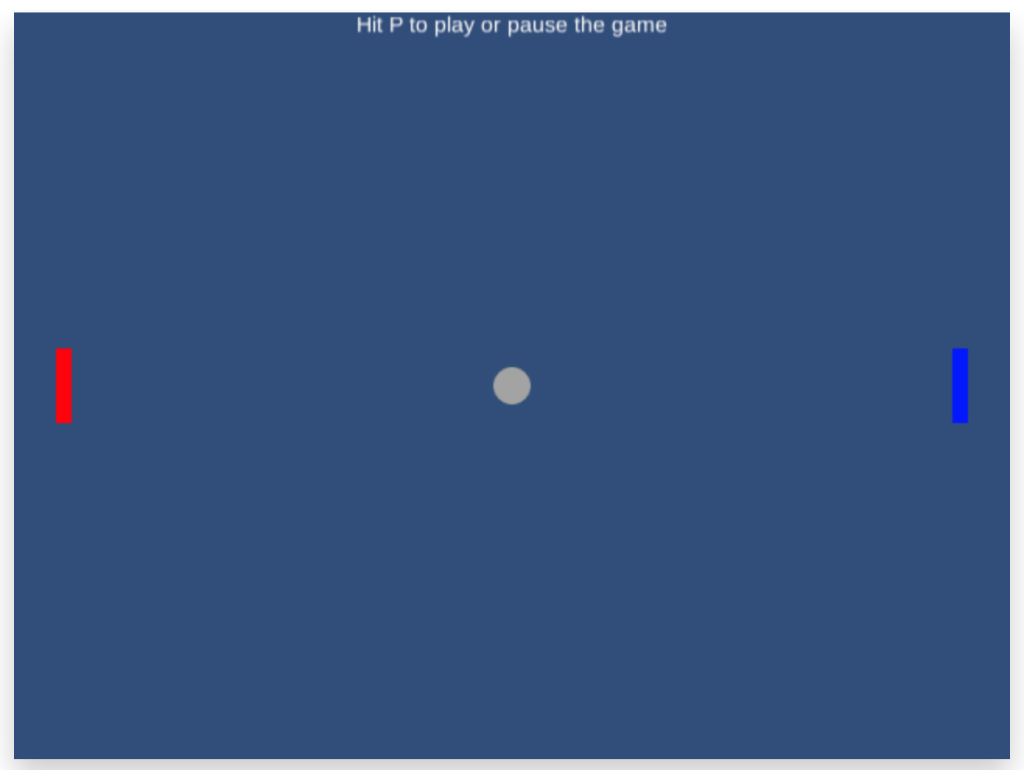 Pong was one of the first video games ever made and was the first successful commercial game. When Pong was first created the developers most likely struggled with the logic for the code, however, nowadays you can make a simple two player Pong with one method call, colliders, and sprites. Pong gets harder to create once the decision to make a one-player Pong is made. In this tutorial, we will create the base gameplay for Pong and break down a very simple AI alternative that still adds to gameplay value.

We must ask, what are the core elements of Pong gameplay? Here is a list with the answer to that question:

With this list we can beginning programming the game.

Note that any numbers used relating to a game object’s location, rotation, scale, etc are relative and may need to be changed for your specific setup.

Setting up the Game

Now that we’ve analyzed the fundamentals of Pong we can start setting up the game. Go ahead and open Unity and create a new 2D project. Once the editor opens, set the game screen’s aspect ratio to 4:3. We are using 4:3 since this is one of the most common screen ratios and is one of the closest ratios to being a standard. Inside of the Assets pane create four folders named Scripts, Sprites, Prefabs, and Materials. These folders will be used to hold all of our game assets.

Download the appropriate images for the game and add them to the Sprites folder (this can be done via drag and drop). The images we just added will be the sprites, interactive game objects, used in the game. 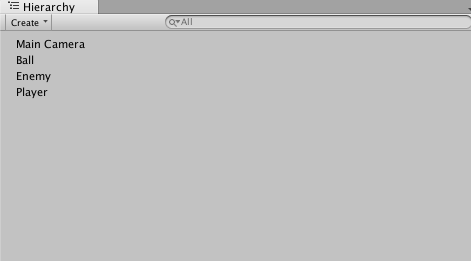 Now we need to give each asset a name and set their initial properties and tags. You can name the blue block “Player” and set the player’s x-position to 6 and its x-scale to .2.

We are going to need to create a tag to separate the paddle game objects from other game objects. In a broad sense, you can think of Tags as categories for game objects. Click on “Untagged” (located under the player’s name) and select “Add Tag”. Create a new tag named “Paddle”, and re-select the player game object and set its tag to Paddle.

Name the red block “Enemy”. Set the enemy’s x-position to -6 and its x-scale to .2. Make the enemy game object’s tag Paddle.

Name the grey circle “Ball” and go on and create a new tag named “Ball”. Make sure to set the ball game object’s tag to Ball.

In the Assets pane, open the Scripts folder and create a new C# script named “PlayerController”. Open the PlayerController script in your IDE and type: 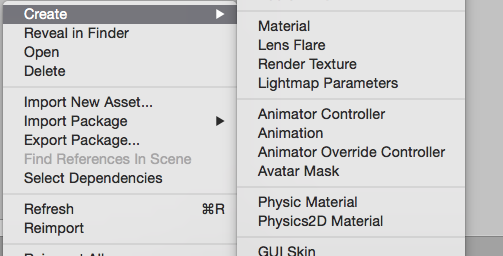 Go ahead and name the new material “Bounce”, and set its bounciness to 1 and its friction to 0. 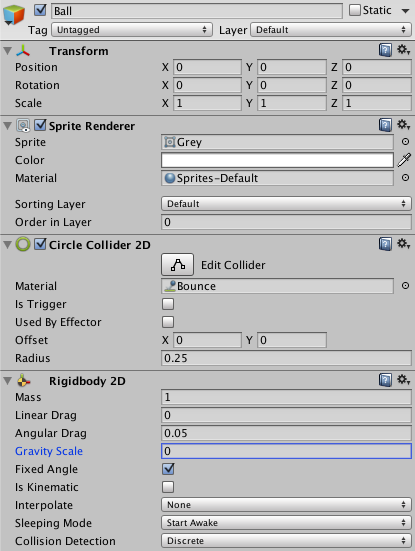 Open the Scripts folder inside of the Assets pane and create a script named “BallController”. Open the BallController script inside of your IDE and type: 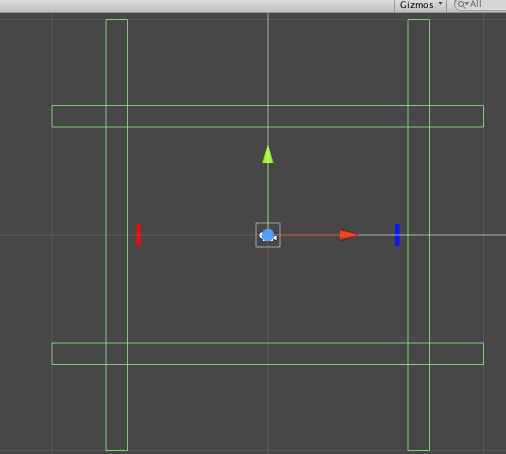 We want the left and right bounds to destroy the ball when the ball gets past one of the paddles. Inside of the Assets pane open the Scripts folder and create a new C# script named “BoundController”. Open BoundController inside of your favorite IDE and type:

Select the Enemy game object and add a Box Collider 2D. Inside of the Assets pane open the Scripts folder. Create a new C# script named “EnemyController” and type:

Note: 1.75 is used for the enemy’s speed solely because it makes the enemy slow enough not to be able to get to every ball that comes its direction.

Another Note: We used fixed update because this method is better for movement since it updates the game object at a fixed rate.

We can create a text game object (in the hierarchy pane right-click -> UI -> Text), and name the text game object PlayText. Next let’s set its Text value to “Hit P to play or pause” and center align the text. Now we can align the game object to the top of the screen and then anchor it. Let’s set its width to 200 so that all of the text is visible. Finally, set the text color to white.

Save the scene and add it to the build settings (by dragging or checking add current scene) and you’re done!

You have now officially created a basic one-player Pong clone in Unity2D. For more practice try to think of ways to update the game and make it better – add accelleration to the ball (the more hits, the faster the ball), add inertia to paddles, add difficulty levels by increasing the enemy speed, etc.

Vincent Quarles is a student at Drexel University majoring in Interactive Digital Media. Vincent has always been fascinated by computers and technology, but more specifically video games and how to create them. When he isn't coding games he can be found rock-climbing, dancing, or sleeping. Along with various hobbies, Vincent, is also the the Stylist for IlluMANous, a men's advice blog soon to be released.

CSS3 Pong: Insane Things to Do with CSS #17Alex Walker