If you haven’t heard about Microsoft’s new search engine, Bing.com, you soon will: the company plans to spend as much as $100 million on Bing advertising.

Bing is Microsoft’s latest attempt to take on Google at their own game. They have attempted it several times before, but can they succeed this time? Is Bing any good?

First, the name. According to Microsoft CEO Steve Ballmer, “the name is short, it’s easy to say, it works globally.” Perhaps he’s right. Despite the millions spent on market research, Microsoft have never been known for snappily-titled products. Names are either boring and descriptive (Internet Explorer, Word or Office) or confusing and marketing-led (Live-Wassit or Widget.NET). Bing is more of a Web2.0-startup-like name and there is little Microsoft branding.

The Web2.0 feel doesn’t end with the name. The interface is glossy, graphical, and full of effects and pop-up dialogs (unless you’re using IE6). Microsoft have attempted fun and trendy in the past, but always looked like a Dad trying to disco dance. Bing is a much better: it will appeal to kids without putting off corporate users. 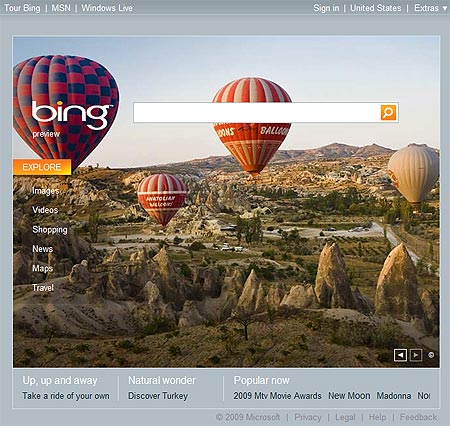 But is searching any good? Microsoft are calling Bing a “decision engine” because it refines results more carefully and offers topics of related interest. It will recognise your search terms and offer refinements in a menu on the left. For example, enter “Star Trek” and it will offer the top results plus links to images, cast details, wallpapers, the theme tune, DVDs and episode guides. Whilst Google offers a list of 92 million links, Bing only has 52 million results but could offer more appropriate materials and related search terms. 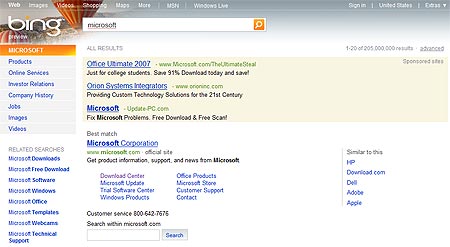 Interestingly, terms such as “facebook” initially return just one result: Facebook.com. There are links to references, applications, and an embedded Wikipedia page about the site. You can expand on the results but, unlike Google, there is less reason to leave the site: something that Microsoft and their advertisers will appreciate.

Less popular terms show a Google-like list of results with sponsored links at the top and right. There are some nice touches: hover over a link and it will show you a snippet of text from the website or hover over a video and it will play a short clip immediately.

Overall, Bing has a slightly unfinished, work-in-progress feel (although it’s better than Wolfram Alpha). The US-based service is the most complete: switch to it by clicking your country name at the top-right. Region-specific versions for the UK and other locales are expected within a few weeks.

Unlike Microsoft’s previous over-ambitious claims, the company is downplaying their expectations of Bing. Their initial target is Yahoo which currently handles around twice the number of Live.com searches. But they’re not kidding anyone: Google is the competition they really want to beat. It will take time to assess whether Bing’s search results are better or worse than Google. They appear to be good – perhaps as good – but can it overcome people’s search-switching inertia?

Microsoft states that Bing will address the 40% of search queries that go unanswered. I would be interested to know how they arrived at that figure, but would Google be so dominant if users were disappointed with their search results?

What do you think of Bing? Is it good enough to take on Google or is it just another frustrated failure?