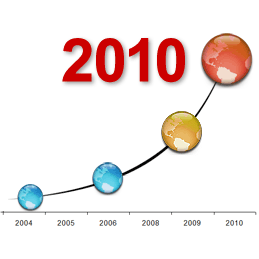 Consumer demand for bandwidth will start to exceed supply from as early as next year according to a new report from Nemertes Research. Internet traffic is growing at around 60% per year, and that does not include the expected exponential rise in demand from India and China. The problem could lead to connectivity disruption and “brownouts” where internet devices could go offline for several minutes at a time.

The popularity of bandwidth-hungry websites such as YouTube is partly to blame. The video sharing website now generates more traffic than the whole of internet did in the year 2000. More people are also working from home or using their PCs for cheap entertainment: by 2012, the internet will be 75 times larger than it was in 2002.

US telecoms companies are currently spending almost $40 billion per year upgrading cables and network infrastructures to increase capacity. However, demand keeps increasing and monthly traffic has already reached 8 exabytes (a quintillion, or a million-trillion, bytes – a single exabyte is equivalent to 50,000 years’ of DVD-quality video).

The report warns that an unreliable internet would be devastating for business and Web2.0 applications could be rendered useless. It estimates that $140 billion must be spent worldwide to bolster network capacity. That amount of investment is unlikely, especially in the current economic climate.

The internet has transformed every aspect of our lives, and there is too much at stake to let it become unstable. In the short term, we can expect:

An unreliable internet will also be used by fewer users, which could naturally reduce bandwidth demand.

Do you believe the Nemertes report? Is the internet approaching critical mass? What can be done to prevent the problem?

2010: The Year That Was at SitePointLouis Simoneau