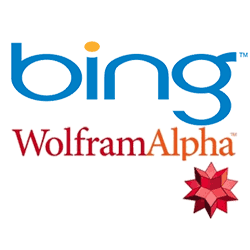 In their ongoing attempt to lure users away from Google, Microsoft have teamed up with WolframAlpha to improve results in the Bing Search engine.

Both Bing and WolframAlpha were launched in 2009:

Linking both services could work well. For example, a search for the planet “Mars” could show a wealth of technical information from WolframAlpha plus links to associated websites such as Nasa (and the chocolate company).

This isn’t the first search Bing partnership deal Microsoft has instigated. The company announced a Yahoo partnership in July and has recently begun integrating results from Facebook and Twitter.

It appears that the future battle for web search traffic is likely to be dominated by Google vs Microsoft in allegiance with everyone else. Who will win? Let’s hope no one does — the competition encourages innovation.

Will Bing and WolframAlpha be a good fit? Would you use it in preference to Google Search?