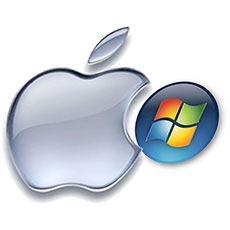 Just when you thought all was quiet on the OS front, Apple breaks its silence to slam Windows 7 as being complex, expensive, and the cause of user headaches. Brian Croll, Vice President of OS X product marketing, explains:

Windows users are really tired of all the headaches that they’ve been getting over the years, starting all the way back from Windows Me to NT to Vista and now Windows 7. As a result, I think people are looking for something different, and the Mac offers real ease of use, stability and security.

Windows 7 is still just Windows. It doesn’t change a lot. It’s still complex, it’s still really expensive when you look at the cost of the upgrade, and there’s still security concerns. It turns out when you get Windows 7 it doesn’t even have some of the basic applications like mail or chat, or programs to manage your photos. You actually have to go and find them and download them.

For the consumer, there’s a lot of headache and annoyance built in to Windows 7. It’s built on a lot of antiquated technology that doesn’t change from release to release. We think that most people probably aren’t going to make that jump (from XP/Vista), and as a result, are going to be looking for new computers.

Let’s examine his statement in detail:

1. Windows users are tired of the headaches

Really? We’ve all had problems with Windows but does any OS offer a trouble-free experience? I think not, Mr Croll — and Macs are hardly exempt.

That’s a relief — users would be very confused if it weren’t! The OS has evolved and it’s certainly more reliable and less confusing. Perhaps its evolution could have been quicker, but people like what they know.

3. There are no basic applications

Microsoft has dropped Windows Mail, MSN Messenger, Photo Gallery, Movie Maker and several other applications from Windows 7. Internet Explorer 8 can also be uninstalled (to an extent).

But isn’t that what the industry wanted? Everyone complained about Vista’s bloat and Microsoft was fined on several occasions for providing free software that destroyed competitors. It finally looks as though the company has listened, but they still can’t win!

You should also note that the applications are still available. They can be downloaded for free from http://download.live.com/ and they also appear as an optional “Live Essentials” entry in the Windows 7 Update panel. However, Windows users can choose alternative applications if they wish.

4. It’s built on a lot of antiquated technology that doesn’t change from release to release

Microsoft work hard to retain program compatibility between releases. They test and support thousands of applications, so it’s not surprising old code is retained. Windows compatibility may not be perfect, but how many other companies strive to support 15 year-old software?

Perhaps Mr Croll is unaware that OS X has been available since 2002 and is based on a 40 year-old operating system? I’m sure some of the original Unix source code can still be found lurking beneath the surface!

It’s slightly bizarre that Apple’s marketing departments regularly resort to Microsoft bashing. Their most devoted fans would never touch a non-Apple product. Even Microsoft users recognize that Apple make some glorious hardware and software. So why is Apple always on the attack? It’s rare for Microsoft to retaliate.

Has Apple become overly arrogant? Is Windows 7 a big concern for them?