Like clockwork, six weeks after releasing Firefox 37, Mozilla has released Firefox 38, which includes some impressive new features that will keep lovers of the bleeding edge happy. However, it also comes with a bitter pill for some, in the form of digital rights management integration.

Let's look at some of what's in the bag.

Firefox 38 now supports both the picture element and srcset attribute on images—joining Chrome and Opera.

However, there's still one bug left for Firefox to address with this. Responsive images will load using the correct media queries, but currently don't respond to viewport resizing.The bug is currently being worked on and should be fixed soon.

Firefox 38 now allows code running in a Web Worker to open up a WebSocket connection. This is great for games or other collaborative applications, which can now do their multiplayer/realtime logic in a separate thread from the UI.

The redesigned Options panel is now default for version 38. (Prior to this, it was only possible to activate it by changing its settings in about:config). 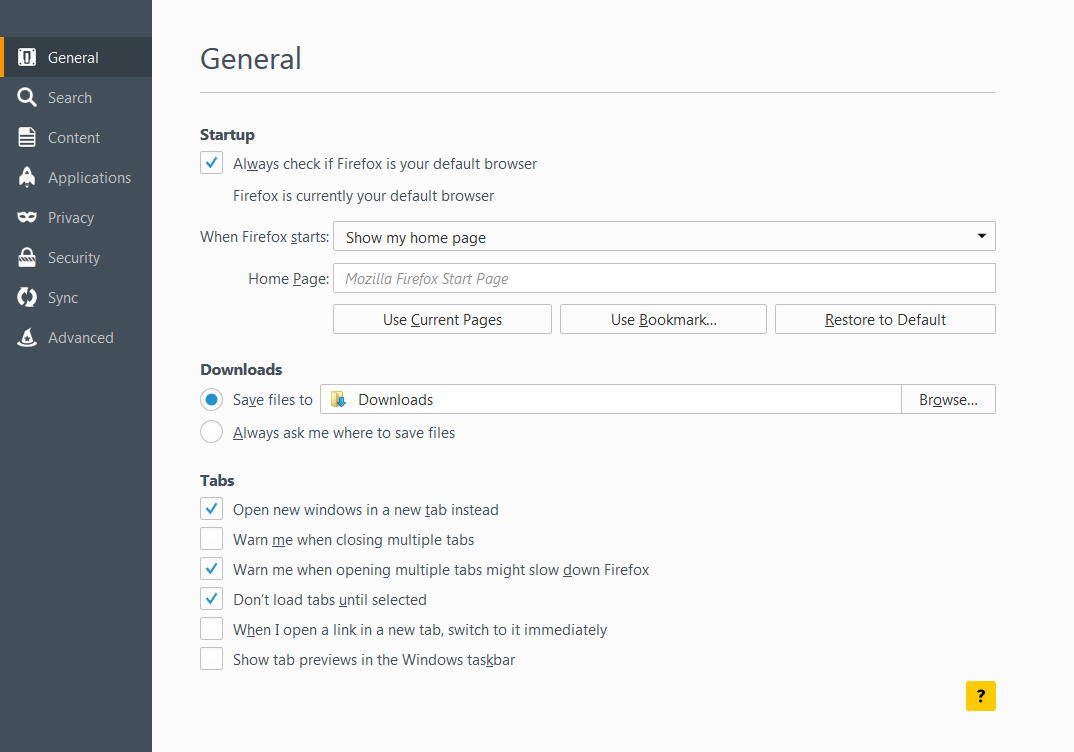 If you don't like the new design, you can go back to the old layout via about:config, setting browser.preferences.inContent to false.

EME is the fruit of the W3C's rather controversial venture into the world of digital rights management (DRM). It works by providing a channel of communication between the browser and the content provider's copyrighted material.

The advantage for end users is that HTML5 video can be used for content such as streamed video, removing the need to download third-party plugins like Flash or Silverlight.

It's not a popular decision with some commentators, though, such as Cory Doctorow, who laments the move. Mozilla's argument is that its browser will be left behind if it doesn't support video streaming services like Netflix. But it's a difficult situation for an organization dedicated to supporting the Open Web.

Netflix is currently testing Firefox’s DRM solution to see if it's suitable for serving content to its subscribers.

So, three cheers for DRM! Or maybe not so much … If you still feel uncomfortable about the decision, you can download a fresh copy of Firefox without EME.

In total, 13 security bugs have been fixed in Firefox 38. Among them, five were marked by Mozilla as critical.

To increase the security of WebRTC—a relatively new API enabling real-time communication in the browser—Firefox 38 now requires that applications or servers support PFS (perfect forward security) ciphers, a public-key system. (As a consequence, developers who have a WebRTC application or server will need to make sure their code is up to date.)

In Firefox 37, the Developer Tools' Network panel saw significant security improvements—users being able to get information about the connection of every single resource. Firefox 38 improves on this, by adding warnings if SSLv3 is used for the encryption process, instead of TLS or RC4.

Better typography for Japanese and Chinese language sites is now possible without clunky libraries or extensions by using the <ruby> markup. It's used for things like indicating the pronunciation or meaning of characters in the text. (You can read more about it here.)

For some large organizations, having to deploy a new browser version every six weeks is too much of a burden. So with every seventh stable release of Firefox, Mozilla releases a different version of Firefox, known as Firefox ESR (Extended Release Support). With Firefox 38 comes the latest ESR version.

There are two differences between Firefox 38 and ESR 38 worth noting:

The latest Firefox ESR can be downloaded here.

Just a few days after the release of Firefox 38, Mozilla pushed out the 38.0.1 minor update, which includes additional bug fixes.

You can find a full list of what's new in version 38 on the official release notes page, and the Mozilla Developer Network page lists changes of particular interest to web developers.

While Firefox 38 comes with some pleasing new features, the addition of DRM will leave a bitter aftertaste for some. It's obvious that Mozilla is not happy about it, but they believe it's the right decision in the long run.

What's your feeling about that? Let us know your thoughts in the comments!