This Node.js tutorial series will help you build a Node.js-powered real-time chatroom web app fully deployed in the cloud. In this series, you will learn how to setup Node.js on your Windows machine (or just learn the concepts if you’re on Mac), how to develop a web frontend with Express, how to deploy a Node.js Express app to Azure, how to use Socket.IO to add a real-time layer, and how to deploy it all together.

The tutorial will use the optional Visual Studio and the Node.js Tools for Visual Studio plug-in as a development environment. I have provided links to free downloads of both tools. This is a beginner to intermediate-level article –you’re expected to know HTML5 and JavaScript.

Welcome to Part 3 of the hands-on Node.js tutorial series: Build a Node.js-powered chatroom web app. In this installment, I will show you how to use your existing express-based Node.js app to create a chatroom backend with WebSocket support.

package.json is a file that holds various metadata relevant to the project, including its dependencies. npm can use this file to download modules required by the project. Take a look at this interactive explanation of package.json and what it can contain. 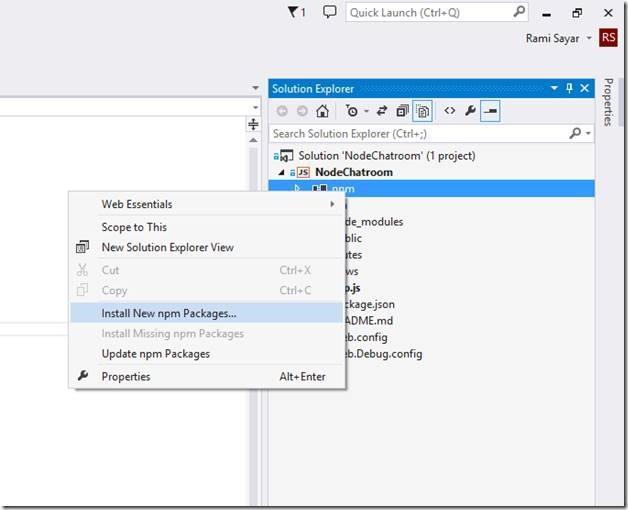 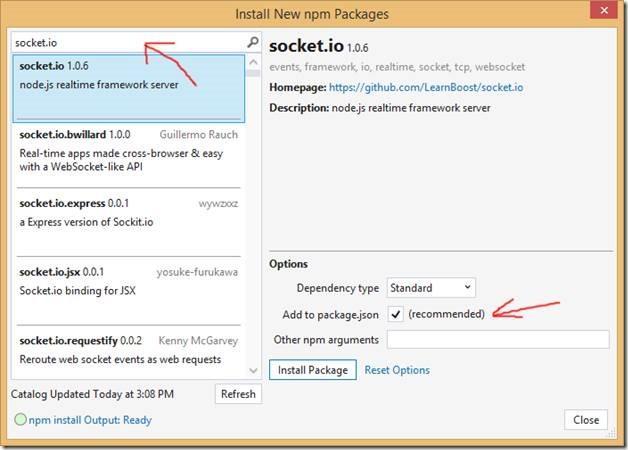 The next step is to add Socket.IO to app.js. You can achieve this by replacing the following code…

The next step is to add support for MongoDB to our project. You can do that by adding the following line to the dependencies object in package.json. Make sure to save your changes to the file.

Right-click on the npm part of the project in the Solution Explorer to reveal the right-click context menu. Click “Install missing packages” from the content menu to install the MongoDB package so that it can be used as a module. 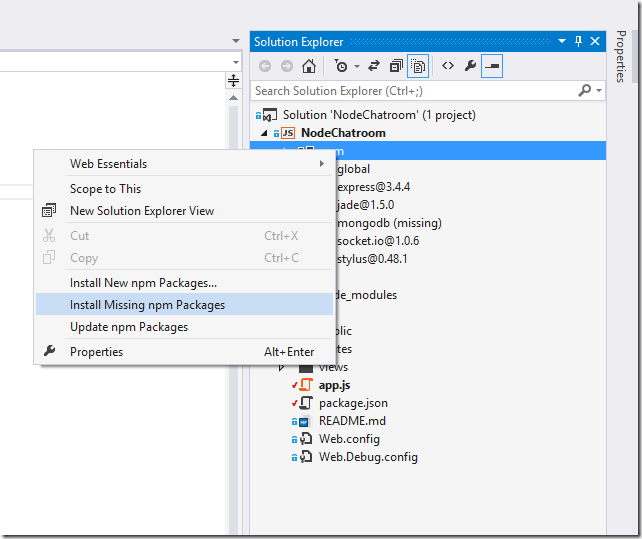 We want to import that module to be able to use the MongoDB client object in app.js. You can add the following lines of code after the first require('') function calls, such as on line 11.

We want to connect to the database using the URI we have in the CUSTOMCONNSTR_MONGOLAB_URI environment variable. Once connected, we want to insert the chat message received in the socket connection.

As you can see in the above code, we use the process.env object to get the environment variable value. We go into a collection in the database and we call the insert function with the content in an object.

Every message is now being saved into our MongoDB database.

Of course, we don’t want our users to feel lost once joining the chatroom, so we should make sure to send the last 10 messages received to the server so at the very least we can give them some context. To do that, we need to connect MongoDB. In this case, I am refraining from wrapping all of the socket code with one connection to the database so that I can still have the server working even if it loses the database connection.

We will also want to sort and limit my query to the last 10 messages, we will use the MongoDB generated _id as it contains a timestamp (although in more scalable situations, you will want to create a dedicated timestamp in the chat message) and we will call the limit function to limit the results to only 10 messages.

We will stream the results from MongoDB so that I can emit them as soon as possible to the chatroom as they arrive.

The above code does the job as explained in the previous paragraphs.

You can redeploy to Azure by following the past tutorials (such as part 2).

In conclusion, we have a chat system capable of broadcasting a message received via WebSockets to all other connected clients. The system saves the message to the database and retrieves the last 10 messages to give context to every new user who joins the chatroom.

Part 4 — Building a Chatroom UI with Bootstrap is here. You can stay up-to-date on this and other articles by following my twitter account.

Build a Web App with Backbone.js and Socket.IOIgor Ribeiro Lima