This Node.js tutorial series will help you build a Node.js-powered real-time chatroom web app fully deployed in the cloud. In this series, you will learn how to setup Node.js on your Windows machine (or just learn the concepts if you’re on Mac), how to develop a web frontend with Express, how to deploy a node express apps to Azure, how to use Socket.IO to add a real-time layer, and how to deploy it all together.

The tutorial will use the optional Visual Studio and the Node.js Tools for Visual Studio plug-in as a development environment—I have provided links to free downloads of both tools. This is a beginner- to intermediate-level article –you’re expected to know HTML5 and JavaScript.

Welcome to Part 1 of the hands-on Node.js tutorial series. In this instalment, I will explain what Node.js is, why you should pay attention to Node.js, and how to set up your machine.

What is Node.js? Why Use It?

Node.js is a runtime environment and library for running JavaScript applications outside the browser. Node.js is mostly used to run real-time server applications and shines through its performance using non-blocking I/O and asynchronous events. A complete web ecosystem has been built around Node.js with several web app frameworks and protocol implementations available for usage. It’s definitely one of the easiest and fastest way to develop real-time applications on the web today.

Why use Node.js? One word: JavaScript. JavaScript is an extremely popular language and is credited with being one of the driving forces that turned the web into the dynamic wonderland that it is today.

JavaScript arose on the front end but — thanks to the V8 JavaScript engine and the work of Ryan Dahl — you can now run networked JavaScript applications outside of the browser precisely to build web apps. Node.js lets you unify the programming language used by your app. No longer do you need a different language for your backend—you can use JavaScript throughout. If your background is in building and design websites and web app frontends in HTML, CSS and JavaScript, you don’t need to pick up another language to develop complex data-driven back-ends for your apps.

Node.js plays a critical role in the advancement of WebSockets as a method for real-time communication between the front and back ends. The use of WebSockets and the libraries building on that protocol such as Socket.IO have really pushed what is expected of web applications and lets us developers explore new ways to create the web.

How to Set Up Node.js on Windows 8

To get started, you’ll need a reasonably up-to-date machine. I will be showing you how to install Node.js on Windows 8.1.

First, download and install the Node.js runtime. Choosing the Windows Installer is one of the easiest ways to get started.

Alternatively, if you are a fan of Chocolatey, the package manager for Windows, you can install Node.js by running:

If you go to your Command Prompt and type in node –h, you should see the help documentation for the node.js executable displayed.

Along with Node.js, npm, the system used to manage node.js packages, should be installed and available on the Command Prompt as well. Simply type in npm –h, you should see the help documentation for npm displayed.

In case of an error…

If you encounter an error similar to this one…

…the resolution is to create a folder at the path specified above, as shown in this StackOverflow question. This is only an issue in the latest Node.js installer and should be resolved by next release. You can create the folder like so:

With Node.js installed, it’s time to select a development tool. Feel free to use any editing tool you want. Throughout these tutorials, I will use Visual Studio to develop, debug, and deploy the chat engine; as well as Node.js Tools for Visual Studio (NTVS) –a free open-source plug-in for Visual Studio that supports developing Node.js applications.

What’s cool about NTVS is that it adds Node.js support for editing, Intellisense, performance profiling, npm, TypeScript, debugging locally and remotely (including on Windows/MacOS/Linux). It also makes it easy to quickly create web sites and deploy them to Microsoft Azure Web Sites or Cloud Services. 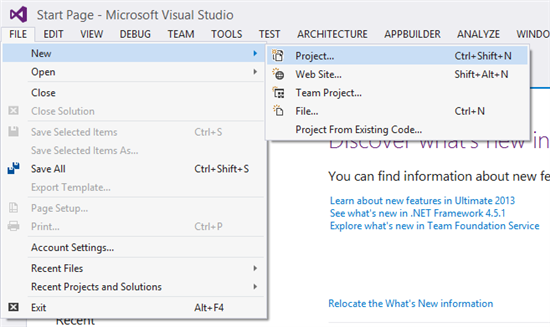 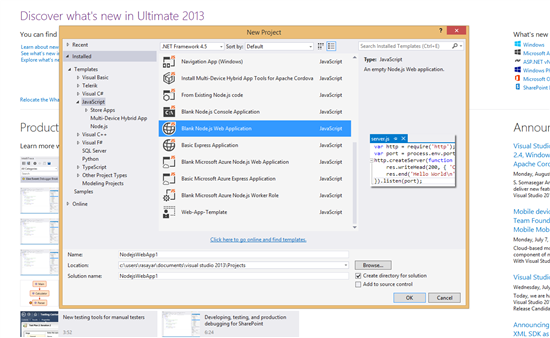 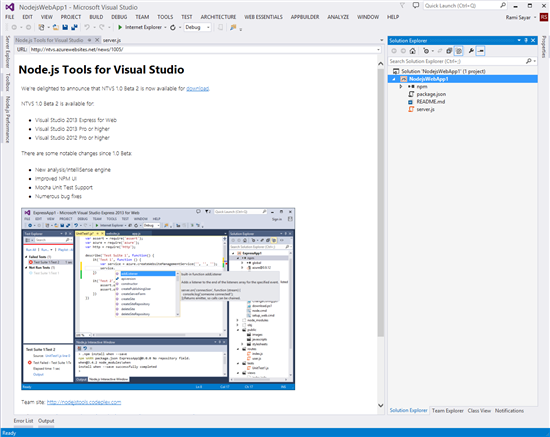 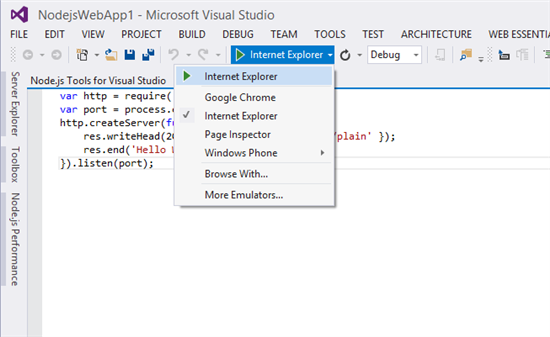 A “Hello World” app in Node.js

Here’s the code used in the server.js file linked above.

As is typical in other languages, the generated code example shows you how to output “Hello World” in the browser. Let me explain how the generated code in server.js works line by line. As stated in this tutorial series description, I am assuming you have a knowledge of JavaScript, HTML5 and how HTTP/the Internet works.

Node.js has a simple module and dependencies loading system. You simply call the function “require” with the path of the file or directory containing the module you would like to load at which point a variable is returned containing all the exported functions of that module.

On this line, we want to determine on which port the HTTP server serving the HTML should run. If a port number is specified in the environment variables, we will use that one or we will simply use 1337.

We want to create a server to handle HTTP requests. We will also pass the createServer function a function callback containing two parameters to a handle each individual request and return a response. Take a look at Michael Vollmer’s article if you’ve never encountered callback functions in JavaScript. The request received is passed in the req parameter and the response is expected to written to the res parameter.

Any HTTP response requires a status-line and headers, to learn more about HTTP headers and how they work check out this article. In this case, we want to return 200 OK as the status response and to specify the content-type as plain text. We specify this by calling the writeHead function on the response object.

We close off the callback and call the function listen at the port we defined earlier, this will start the server and start accepting requests sent to the defined port.

To see the result, you can start debugging by pressing on the button shown in the previous screenshot. You can see “Hello World” in the browser. 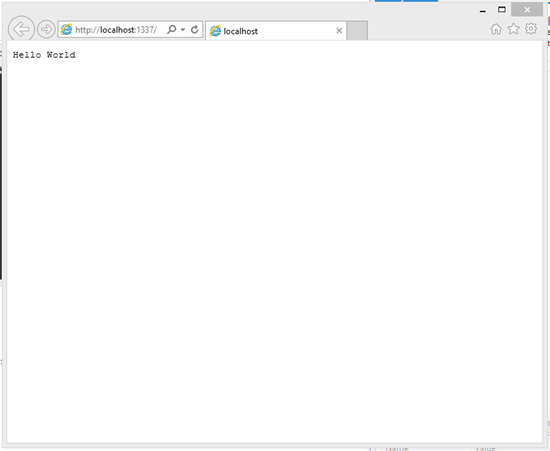 Part 2—How to Deploy Your “Hello World” into the Cloud is here. You can stay up-to-date on this and other articles by following my twitter account.

More learning for Node on Azure