New browser releases used to be a major event. We tested the betas, evaluated the features and eagerly awaited the final version. Unless you’re using IE, those days are long gone. Few people know or care what edition of Chrome they’re running and Firefox is heading down the same road.

Firefox 8 was released on November 8, 2011 — just six weeks after version 7. You may have received an automatic update; if not, head over to getfirefox.com. The upgrade process is becoming smoother but you may encounter one or two add-on incompatibilities.

As usual, there are few obvious new features:

However, the best new feature solves a major problem: atrocious add-ons. Firefox has thousands of extensions but not all are created equally. In addition, a number of unscrupulous software vendors bundle sneaky add-ons which are often hidden within installation settings or installed without the user’s consent. I’m looking at you Microsoft, Yahoo, Oracle, Nokia and anti-virus companies.

Companies claim their add-on aids browsing but few are genuinely useful. They often clutter the interface, hog memory or increase start-up times. In the worse cases, add-ons have an adverse effect on security or prevent uninstallation. Firefox is often accused of being a slow memory-hog; some criticism is justified but it often comes from users running numerous add-ons they didn’t authorize.

To prevent rogue extensions, Firefox 8 presents you with a list of add-ons when it first runs. Those not been authorized by the user are disabled by default: 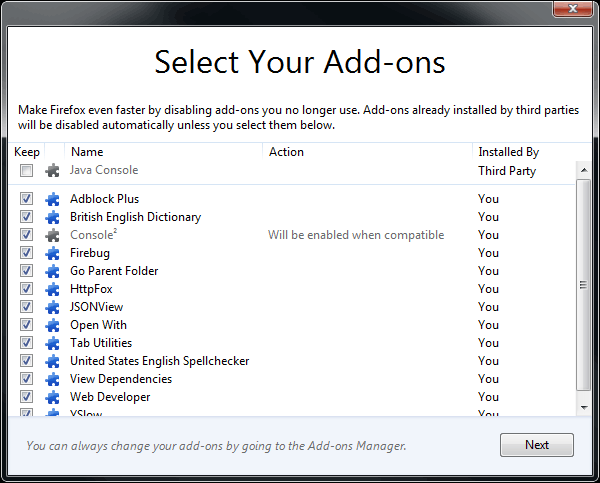 If an extension is subsequently installed by other software, Firefox will disable the add-on and present a confirmation screen. The user must check “Allow this installation” to enable it.

Users have waited a long time for this feature to appear. While Mozilla cannot be blamed for the success of their add-ons system, it has been misused for too many years. I suspect extension authorization will do more to aid performance than many of the other enhancements.