Despite this, not all is rosy in the CSS3 world. When I first dabbled with the techniques a couple of years ago, I was shocked by the impact effects could have on browser performance. A single CSS property could result in visible redraws and page-scrolling treacle. On one site, I had to scrap rounded corners and revert back to images to solve a performance issue. I cursed a few times but simply considered it to be another development gotcha to file in my browser bitch box. 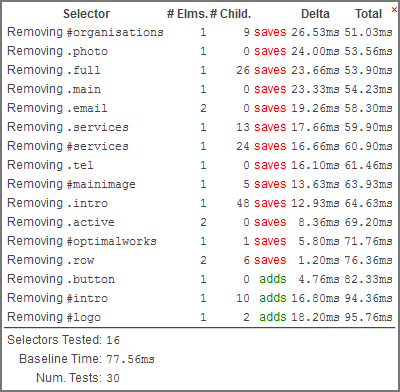 A table of results then shows how each removal affected the scroll speed — time is either added (slower without the effects) or saved (faster without the effects). If the removal of a specific ID or class saves significantly more time than the others, you should be able to isolate the cause of the performance issue.

The bookmarklet runs in all modern browsers but note that it’s a work-in-progress and there are a few drawbacks:

Overall, the tool’s a great idea and it’ll lead to surprising conclusions. On his problem page, Andy discovered that a root element with many children was adversely affected when border-radius was applied in IE9.

Monitor Your Pulse and Stress Regardless of LocationCharles Costa