We had been looking into code quality checking tools for a while here on SitePoint – most recently in a series on Jenkins, but none of those could do what a project I’ve only recently found out about can.

PhpMetrics uses D3 and some sophisticated analysis algorithms to scan your application’s code and output intricate reports about it. 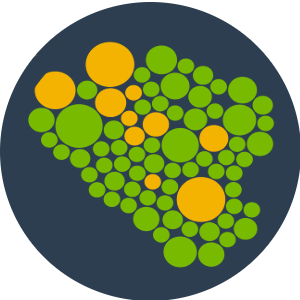 It’s a bit hard to talk about it without seeing a proper example, so let’s install and run it, then explain every part.

To test it, we’ll need an isolated environment. As usual, we’ll be using our trusty Homestead Improved Vagrant box, making sure all readers have the same environment to test on.

Like with any modern PHP project, installing is very simple. We’ll install it globally, making it available to all projects on the machine.

We’ll test PhpMetrics on two code-heavy projects: Laravel and Symfony, in framework, not project form. That means we won’t be using the create-project command from Composer, but the bare source of each framework.

We do this to avoid any and all dependency testing, and to stay away from non-framework related code.

Now that we’ve got the projects downloaded, let’s run PhpMetrics on them.

Never mind the fact that we’re using “Laravel” folders here for the reports, they’re just Homestead’s defaults and we can just reuse them for our small example to reduce the configuration steps. This lets us easily access the reports at the following URLs:

Here’s what Laravel’s report gets us: 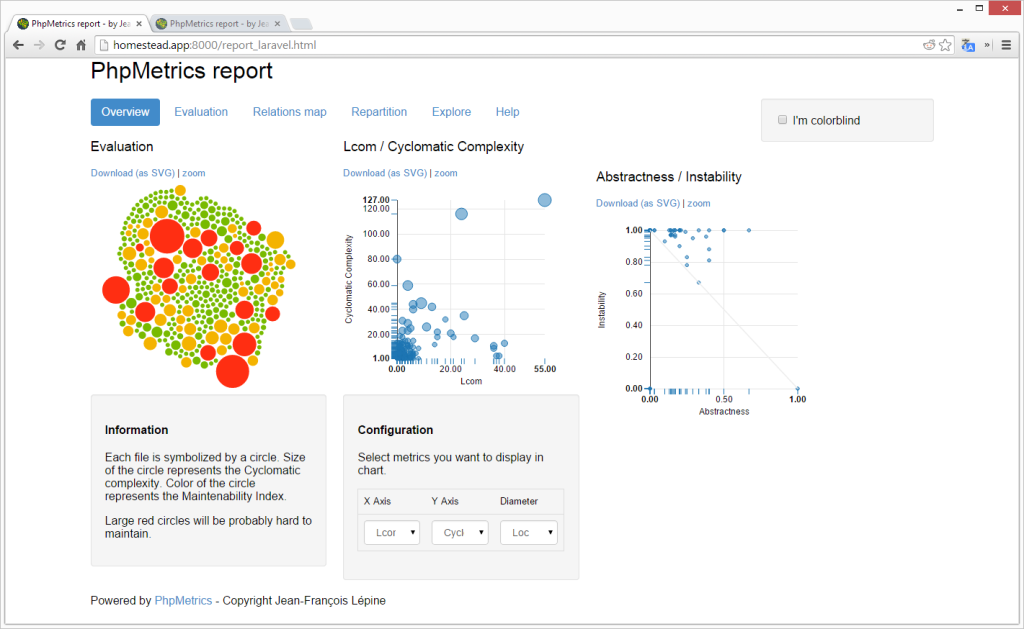 and here’s what we get by analyzing Symfony: 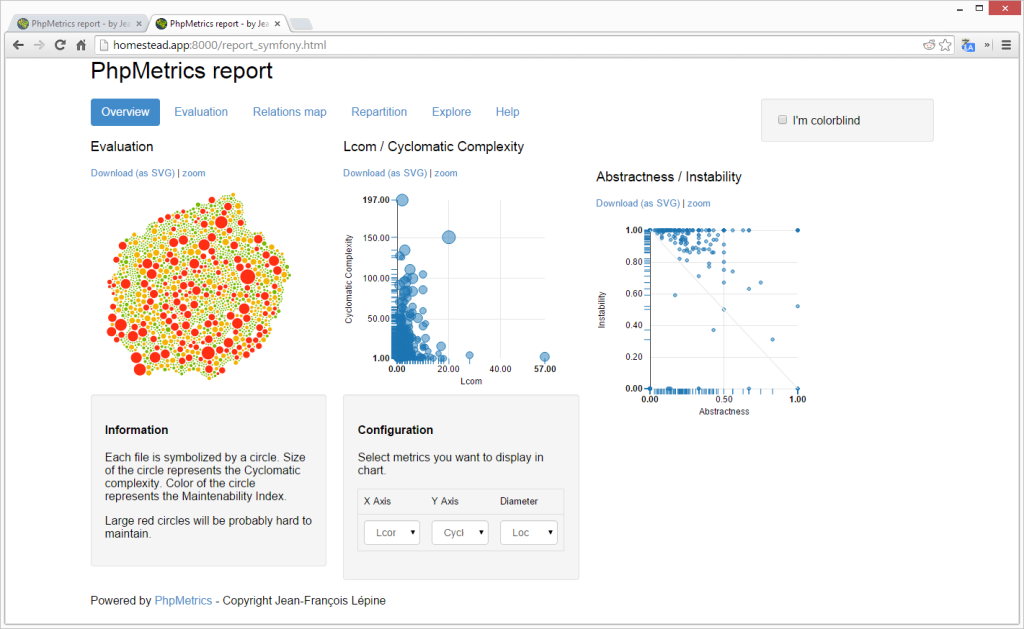 PhpMetrics offers a plethora of metrics. Let’s demystify those circles and graphs and find out what we’re looking at!

As per the how to read the report guide, we can immediately notice Symfony is a bit heavy on the orange-red side, while the grass is greener on Laravel’s side. One important thing to notice, however, is how many more files Symfony contains as opposed to Laravel – you can see this clearly by comparing the density of circles.

PhpMetrics was built with color blind people in mind, so the “color blind” checkbox changes the colors in the circles from green, yellow, orange to stripes at different angles: 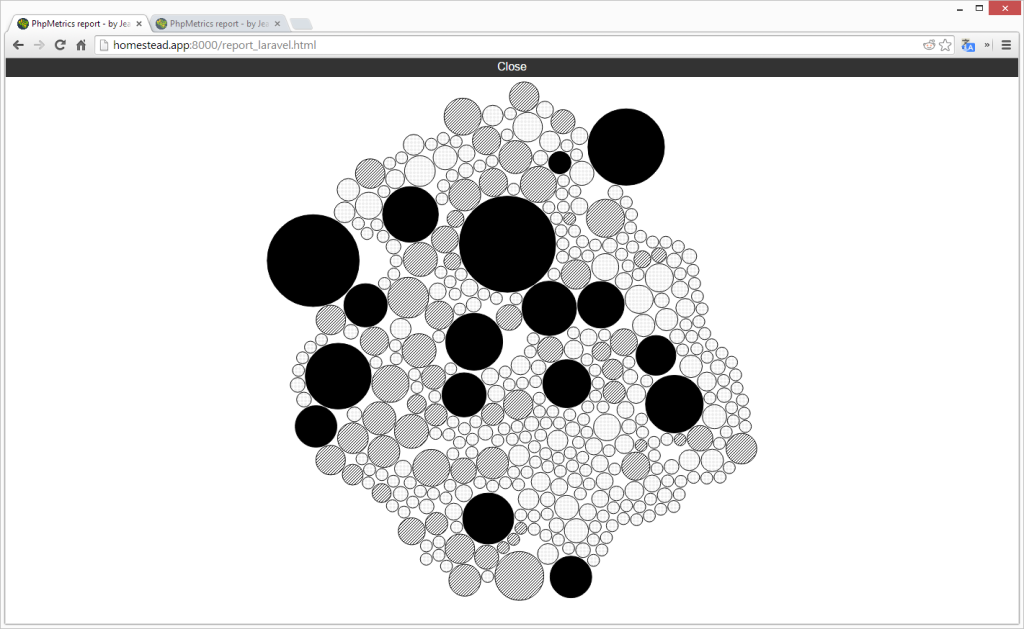 The color coding is the first aspect you can look at, and the first place to look for hints at problems.

The circles, when looked at carefully, represent the CC and MI, and, as the documentations says, large red circles will probably be very hard to maintain.

Both are easily Googleable, but let me spare you the wiki skimming and explain them in layman terms.

Cyclomatic Complexity essentially measures the number of paths to take through a script’s logic. The more paths can be taken, the more complex a file is. A good way to avoid high CC is to make sure your code is as modular and atomic as possible, which becomes second nature when you’re following SOLID principles.

Like Wikipedia says, the Maintainability Index is calculated with certain formulae from lines-of-code measures, McCabe measures and Halstead complexity measures. Lines-of-code measures are self-explanatory – literally counting the number of lines of code. McCabe measures, much as it sounds like a USA political promise, is actually just another name for Cyclomatic Complexity. Halstead complexity is a set of formulae which try to look at the syntax of the file’s code and deduce attributes such as difficulty, code vocabulary, effort, etc. If you’re interested in the specific formulae, check the Wikipedia article out.

Taking all these into effect, the circles are sized and color coded, indicating the sum of all standard metrics for code complexity and maintainability.

If you’d like to see all the data in a more tabular form, you can check the “Explore” tab in the report file: This table will include all the above and more – from lines of code to number of classes and more – both per folder and file. This incredibly detailed report is what you should refer to when looking for highly precise information about your code all in one place.

The middle area in the report’s overview screen contains the custom chart. 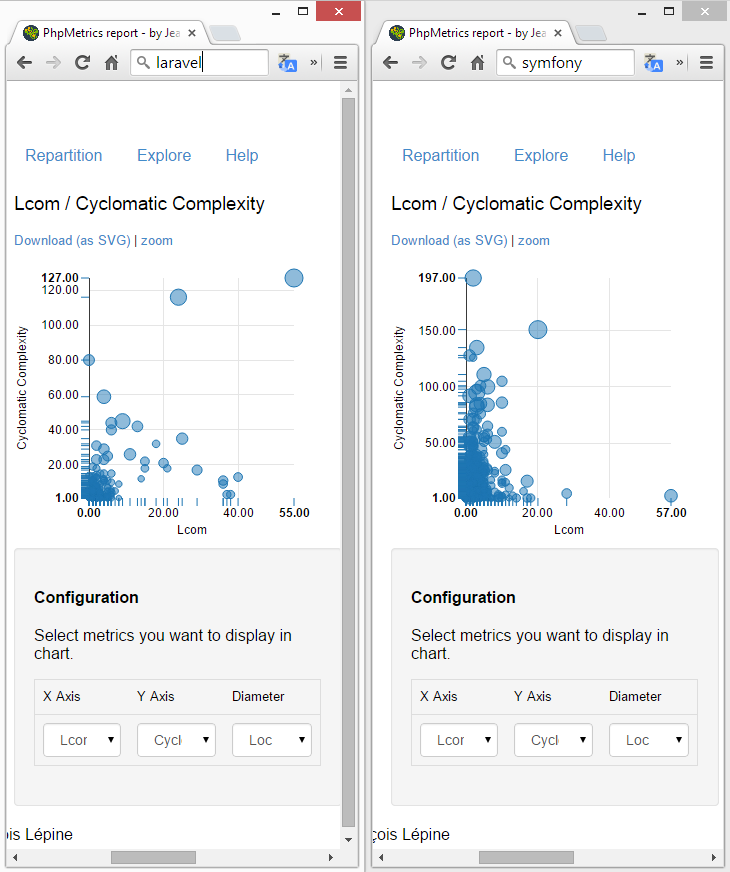 In the example above, we’re comparing the ratio of CC (mentioned above) and Lcom (lack of cohesion in methods) for each file, but you just as easily switch out the X or Y axis value for something else. For example, here’s a comparison of Difficulty per Lines of Code – you can notice that Laravel’s trend is somewhat proportional – with more LoC, more Difficulty is assumed, while Symfony tends to be all over the place with certain files. 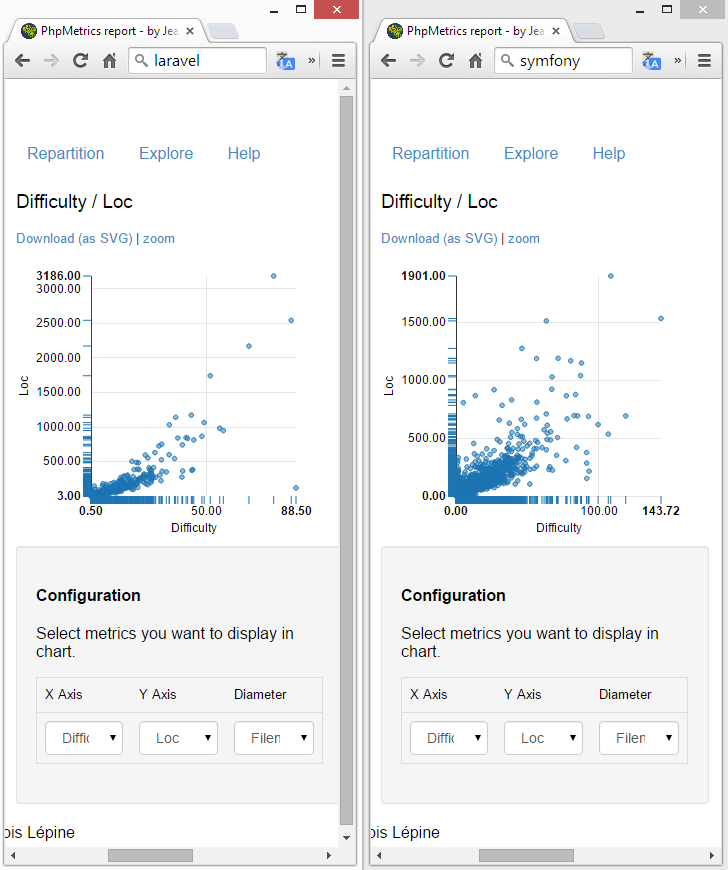 For example, the Symfony file BinaryNode.php has a very high difficulty for its 150 lines of code, while Response.php in its whopping 1275 lines of code has a very low difficulty score. Explore the files that produce curious results, and see what you can find out from these insights.

This chart is very well explained here, but in a nutshell, the average diagonal line is called the balance line, or, the Main Sequence. The goal is to have your classes as close to the line as possible, because this means they’re balanced between being abstract and concrete enough. I do encourage you to read the content at the link above – it’s an easy read and should clear things up.

For some reason, I couldn’t get A/I to work on my local environment properly with Laravel and Symfony.

Evaluation is a web chart which takes the average of various attributes of your entire project, compares these numbers to the standard of other projects the tool has learned so far, and then superimposes your values over those. This is purely cosmetic and carries no real value, as the disclaimer on the Evaluation page says. 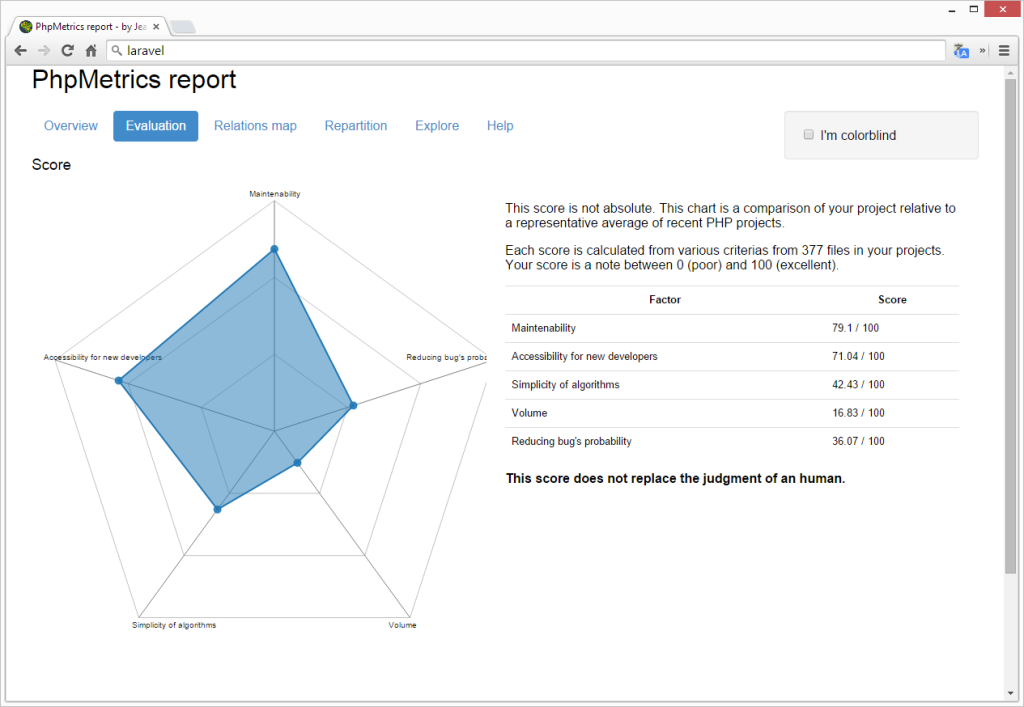 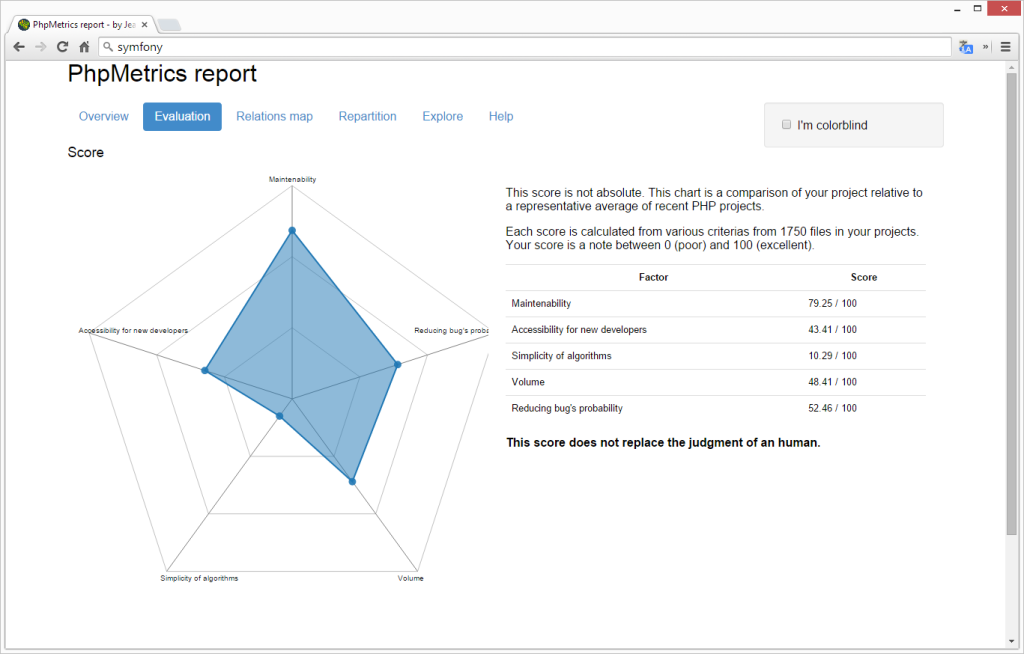 While the tool believes both frameworks are equally maintainable, its not such a shocking conclusion here that Laravel is more new-developers friendly and far more simplistic in algorithms, not to mention less voluminous.

The relations map is more useful for smaller projects – it lets you see the relations between classes. If a class extends or implements another, the relations map will show it. Due to the brutal number of classes in both of these projects and their connections, the map is less than useful here – in fact, it doesn’t even load for Symfony for me. But if you go ahead and try it out on a test project with a smaller number of classes, you’re bound to see the benefits.

Finally, the repartition screen sums up all the data in a format much simpler than the Explore tab, listing out some totals only:

So, what’s to be concluded from these results? Without looking into it too much, we can easily conclude that:

See what else you can learn by playing with the charts and data yourself, then let us know!

PhpMetrics is another in a long line of code quality analyzers, but one with a twist. Rather than looking at the typical code standard issues we’ve come to expect, it looks at a whole set of new attributes and explains your code to you in beautiful math, as soon as you learn its language. To find out what each attribute means, consult the chart.

Will you be using PhpMetrics to scan your projects? Would you install it into your IDE? Is it something you might see as a permanent addition to your CI process? Let us know your thoughts in the comments! 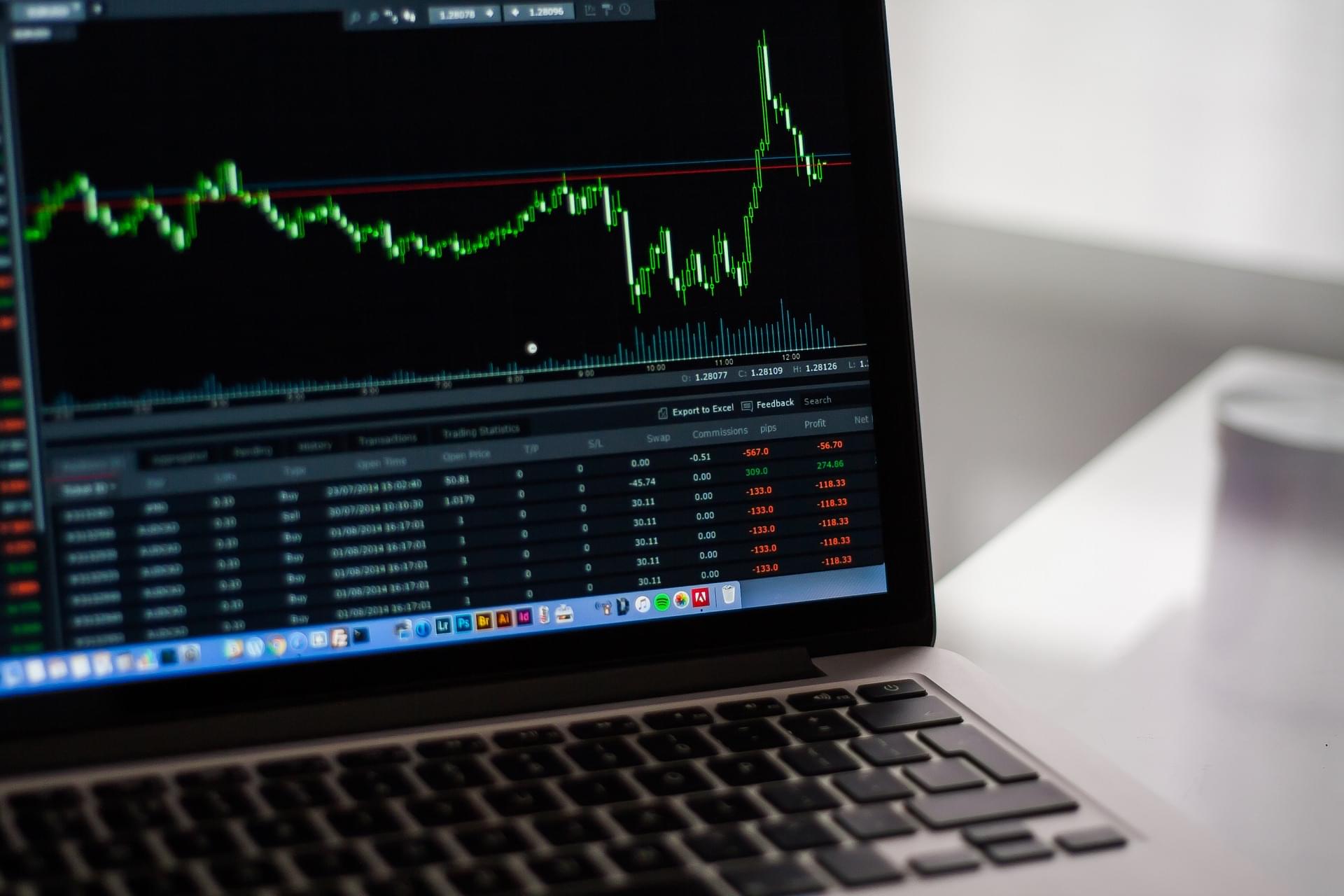