Smartphones, tablets, and telecommunications in general have evolved in leaps and bounds over the past few years, but somehow conference calling – the most common kind of call for most businesses – has remained almost completely unchanged. If you showed a business executive from 1990 an iPhone or Android, they’d likely be amazed, flabbergasted, mesmerized, and confused all at once. If you invited that same person to a modern-day conference call, they’d most likely dial in without a problem and then completely “tune out” like the rest of us do all too often.

If you’ve participated in a conference call within the past 20 years, you’ve almost certainly become very familiar with the frustrations of conference calling. Conference calls are often slow to start, confusing, and usually forgotten completely as soon as the last caller hangs up. Thankfully, Uberconference has addressed each of these typical conference call dilemmas with an elegant interface and thoughtful design.

Even the most productive conference calls often start with several rounds of “Who’s with us?” or “Who’s on the call?” This never-ending “name game” can make for a bad beginning to any call. Thankfully, Uberconference designed a clean, intuitive interface that makes it perfectly clear who you are speaking to. That way, you can start the call with the interesting, relevant, purposeful information that you had planned instead of spending the start of your meeting figuring out who is on the phone. 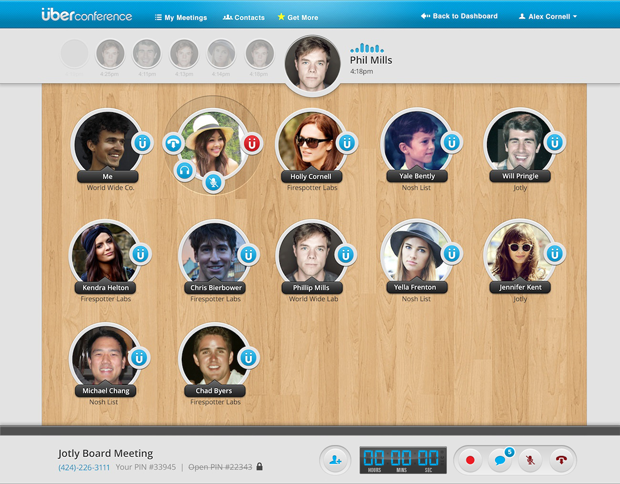 Uberconference's interface makes it very clear who's with you, so that you can talk about what's really important.

“Who Just Said That?”

Another thoughtful addition to the Uberconference interface shows you who’s talking now, who spoke before the current speaker, and who spoke even earlier. This greatly helps everyone understand the dynamics of any conference call conversation, and it prevents any confusion about which participant said what. Uberconference doesn’t just make it clear who’s speaking and who spoke, it also aggregates this information into a post-call report that shows who spoke the most and who spoke the least. Very clever.

“Whose Phone Making That Noise?”

Another common impediment to conference calls is static and busy background noise. It only takes one caller to make a productive conversation all but impossible. Callers from environments that are too busy will bog the call down with background noises. Conversely, callers from environments that are too remote might cause similar problems with static, poor reception, garbling, or other interference. Uberconference helps the call coordinator keep their call productive and distraction-free by enabling them to mute individual participants with the click of a mouse. When combined with the aforementioned ability to see who’s talking (or in this case, who’s ruining the call with unwanted noise), call controllers can identify and mute problematic participants in seconds.

“Can You Step Off The Call?”

Occasionally, callers have a need to share private or sensitive information to only certain participants. Rather than awkwardly asking certain callers to hang up or secretively planning a second, more exclusive follow-up call, you can just use Uberconference’s “earmuffs,” which block chosen participant’s ability to hear the call.

“Is Anyone Taking Notes?”

Even the most productive conference calls can be forgotten if there’s no account of the dialogue and decisions made. Often, people are asked to take careful notes and then deliver copies to call participants. Uberconference makes record-keeping far easier and better; it archives the call in MP3 format and includes a report on attendance and participation for each call. This eliminates entirely the need to catch an absent colleague up with what was said or decided on a call; they can simply log in, see for themselves, and even listen to the call on any computer, smartphone or MP3 player. Documenting conference calls so thoroughly will likely make for better ideas, more focus, and additional accountability.

Below is a video from Uberconference demonstrating all of these innovations:

Conference calls are notoriously difficult and unproductive, but Uberconference offers unprecedented control over these virtual, phone-based meetings. Running a productive, problem-free call can easily impress your clients and colleagues, and more importantly, it can free you up to have the discussions that you need to have without running into the typical road-blocks of normal conference calling.

Do you lead or participate in conference calls frequently? Do you think that the available technology could be better? Would you use Uberconference or a similar conference calling platform to make your calls productive and impressive?

Creating an Audio Calling App with Ionic and PhoneRTCWern Ancheta