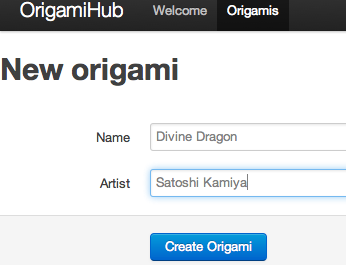 Today I’ll take the next step. This article is a detailed, step by step tutorial that will take you through the process of writing a new Rails 3.1 app that uses Twitter Bootstrap with Formtastic and Tabulous, two great gems that make it easier to implement web forms and tab based navigation in Rails – two major features of Twitter Bootstrap. We’ll also use a third gem called Formtastic-Bootstrap that modifies the HTML produced by Formtastic to play nicely with the Twitter Bootstrap files.

Read on to learn more… in just five easy steps we’ll have a simple web site up and running that illustrates how to implement Twitter Bootstrap forms and tab navigation using Rails 3.1!

Let’s get started by creating a brand new Rails 3.1.3 app, the latest version of Rails available as I write this:

You can see we’re going to create a web site to keep track of Origami artwork! You can also see I deleted the default, static home page, public/index.html. And the last command generates a controller called “Welcome” that will handle displaying the web site’s home page.

The next step is to edit the config/routes.rb file. Go ahead and paste this into the routes file:

You should see this text in the site’s new home page; if you don’t then double check the commands above carefully.

Today I’ll use the Bootstrap-Sass gem by Thomas McDonald to import the Twitter Bootstrap code. To learn more about Bootstrap-Sass and how it works, check out my post from November. Adding it to our new Rails app is simple; first edit your Gemfile and add it to the “assets” group:

Then you need to install it with Bundler:

Next, we need to create a new Sass code file to hold our CSS style code. Create a file called “origami_hub.css.scss” in the app/assets/stylesheets folder with this one line of code in it. This imports the Twitter Bootstrap CSS styles into our app:

Now if you stop, re-run your Rails server and refresh the page you should see the same thing, but with subtle changes in the font and layout:

This may not look much different, but actually there are subtle changes in the fonts, and also the text is flush against the top left corner now. These changes mean we have successfully loaded Twitter Bootstrap into our Rails app! If you ran View –> Source in your browser and inspected the code returned by the origami_hub.css request, you’d see all of the Twitter styles.

So far, so good; now we have our site’s navigation bar appearing correctly. As a next step, let’s create an Origami model along with pages for displaying and editing them – Rails scaffolding will be perfect. For today, I’ll just use two string attributes; the name of the origami artwork and the name of the artist. Here are the commands:

Notice that I deleted two generated files called “scaffolds.css.scss” and “origamis.css.scss” which interfere with Twitter Bootstrap’s styles. Now if you open the origami index page, http://localhost:3000/origamis, you’ll see this:

This should look familiar if you’ve ever used Rails scaffolding before, but here we also see the Twitter Bootstrap table styling.

Our next step today will be to introduce Formtastic, written by Justin French, into our sample app. If you’re not familiar with it yet, Formtastic produces cleaner HTML than the standard Rails “form_for” and related methods, making it easier to create a nice looking form. It’s also easier to use while writing Rails view code. Finally, Formtastic’s HTML is also easier to work with while writing Javascript code or Cucumber tests, since there are CSS styles added to make finding specific form elements easier.

Unfortunately, Formtastic and Twitter Bootstrap don’t play well together: Twitter’s styles don’t refer to the HTML tags produced by Formtastic. But we can get these two components to work together by using a great new gem called Formtastic-Bootstrap, by Matthew Bellantoni – a Boston Rubyist like me. Take a look at the github readme page for more details on how Formtastic-Bootstrap actually works.

To put it into our application, I need to first add it to my Gemfile:

And now as Matthew explains on his readme page, I also need to create a new file called config/initializers/formtastic.rb, which should contain this one line of code:

Next, I need to rewrite the form produced by the Rails scaffold generator to use Formtastic’s semantic_form_for function – paste this code into app/views/origamis/_form.html.erb, overwriting what was there before:

A couple of details to note here:

We need to run bundle install again to install Matthew’s gem; bundler will also install Formtastic itself since it’s a dependency for Formtastic-Bootstrap:

After restarting the server and clicking on the “New Origami” link I get a nice looking form that uses the Twitter Bootstrap styles:

Another one of the great features of Twitter Bootstrap is the nice looking black navigation bar along the top of the page. How can we get that into our sample app? We could just copy/paste the HTML code in from one of the Twitter examples pages, but instead I’ll show you how to use a great new gem called Tabulous. Wyatt Greene, another fellow Boston Rubyist, wrote Tabulous earlier this year and it’s tremendously easy to use. We’re lucky to have such a creative Ruby community here: two of the four gems I’m using today with Twitter Bootstrap were written in Boston! For more information on Tabulous, be sure to read two great articles Wyatt wrote when he introduced the gem in March: Introducing Tabulous: Tabs in Rails and Tutorial for Adding Tabs to Rails Using Tabulous.

Once again, let’s first add the gem to our app by editing the Gemfile:

Now as Wyatt explains in his tutorial, we need to run this command:

This will create a new file called app/tabs/tabulous.rb, where we declare all of the tabs we want to display in our site. I won’t explain all of the syntax here; again refer to Wyatt’s tutorial for more information on exactly what’s in tabulous.rb.

For our sample app, we’ll just need to make a minor edit to the tabs table:

It’s amazing how Wyatt’s generator already did most of the work for us! All I did here was reorder the two lines. For the sake of readability and to save space I removed some comments that normally appear in the tabulous.rb file explaining the purpose of each column in the table; you’ll see those if you open the tabulous.rb file on your machine.

And we’re almost done! The last thing I need to do is add the HTML for displaying the Twitter Bootstrap navigation bar. To do that, I’ll just copy/paste some HTML from their “fluid.html” example page – you can find this HTML in the Twitter Bootstrap github repo. The HTML should go into the app/views/layouts/application.html.erb file, between the <body> tag and the call to yield:

Notice I replaced the <ul>… </ul> HTML from Twitter’s example with a single call to <%= tabs %>. This will display the tabs that I’ve declared in the tab table above! 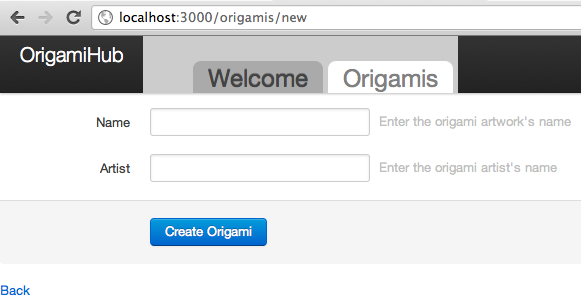 Almost there… but this is still not quite right. By default, Tabulous will include some scaffolding tab CSS code to help you get started. However, since we’re using Twitter Bootstrap we don’t need any of that. To remove it, all we need to do is change the “scaffolding” setting to false in app/tabs/tabulous.rb:

We also need to change the “active_tab_clickable” setting to be true – this will tell Tabulous to always generate an <a> tag for each tab, which is what Twitter Bootstrap expects: 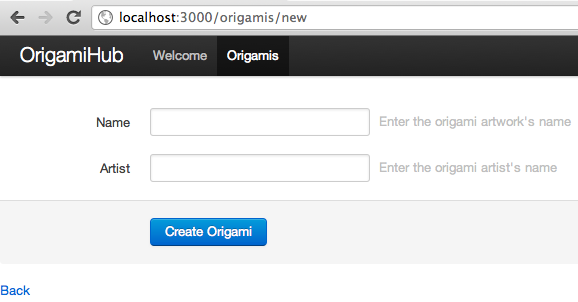 And it works! Now we see the tabs appear properly, and not only that, they actually work too! You can click on “Welcome” to see the Welcome index placeholder page from above, and on “Origamis” to get the Origami index page, since we entered those paths into the tab table in app/tabs/tabulous.rb.

There’s one other CSS bug here you may not have noticed: the “New Origami” text at the top of the form was obscured by the navigation bar – this is because the way Twitter’s CSS code works is that it assumes the HTML body will have padding on it. To fix this, we just need to manually add the 60px padding on the body style in our origami_hub.css.scss file like this – be sure to put the padding style after the import or it won’t work:

And refreshing the page once again we get: 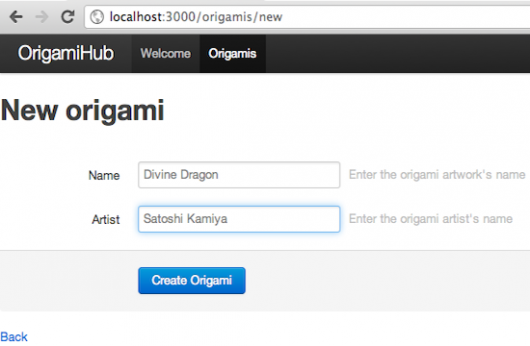 Wyatt’s Tabulous gem will also automatically display the currently active tab properly, since Tabulous and Twitter Bootstrap both use the “active” CSS style to indicate that. It all just works! Now as I add more pages to my app, I just need to add entries in the tabs table, and I’m also free to re-order them.

Twitter Bootstrap is a fantastic way to build a nice looking web site very quickly; however, having a sophisticated CSS library will only take you so far. You still need to build a web application of some kind to bring the Twitter design elements to life. Using Rails on the back end can be a perfect complement to Twitter Bootstrap, but, as we’ve seen today, using Rails can also be a challenge since the two frameworks weren’t designed to work together perfectly. Before you dive into building your next Rails 3.1 application with Twitter Bootstrap, be sure to do your homework – there are a lot of gem authors actively working in this area and as Twitter Bootstrap becomes more and more popular expect to see even more new gems and changes to existing gems.