This, one of the more popular catch-cries of web marketers, is often used to justify the application of gratuitous multimedia to landing pages.

The web sure does make it easy to show stuff through video and animation, and it’s true that well-placed, carefully used multimedia can do much to help communicate complex ideas. But over-reliance on these elements can reduce your impact — especially with users who don’t bother with multimedia like video.

It’s my humble opinion that showing is the only way to go on a marketing page. Whatever you use — words, pictures, video — you should use it to show people what you’re offering. That includes showing benefits as well as features. Tech companies all-too-often fall into the trap of showing features, but ignoring benefits.

Let’s look at your options for showing, rather than telling, both features and benefits, and see how they can play out online — an not just on landing pages, either.

Obviously images show rather than telling — that cliche about a picture telling a thousand words isn’t around for nothing.

We see images all over the web, and images of interfaces are often used to launch new products and services. But that’s not all they’re good for.

Surprisingly few help tools use images, yet this is an ideal place to show as well as tell.

It’s nice of Google to bold the on-screen label I’m meant to look for, but it’s not bolded on the page itself, as you can see below. A simple screencapture with an arrow that shows what in heck I’m supposed to click would be handy here. 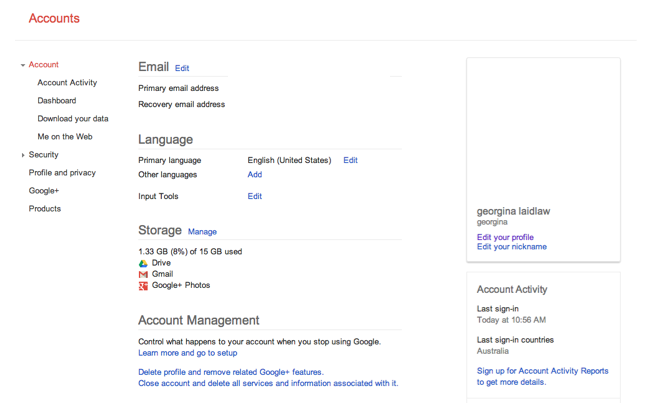 Imagery in help content is a big deal. At best, people come to help in a state of mild frustration. Images can help get them happily back on track a.s.a.p.

In this, the YouTube Epoch, every site owner and her dog wants a fancy homepage video. Usually, the people who demand video are the ones screaming “Don’t tell, show!” the loudest.

The thing is that so much video doesn’t deliver on that mantra. Take a look at the video on the homepage of http://www.collaborate.com/ Collaborate.com.

Yes, this video shows people swiping through the app, but most of the shots are mid-range, not close-ups. You can’t see what’s actually happening, or how it’s helping anyone. True, the voices talk about how the app can help, but they don’t talk to it.

So this video doesn’t show: it pretty much just tells. As do a zillion other promo videos out there.

Small animations are becoming more popular as ways to show how things like apps work, perhaps as a counter to the video-heavy pages that were everywhere a couple of years ago (and are still popular now).

The animations on the Archy homepage act as a quick tour, showing you how simply the tool works.

That tends to be one thing that these simple animations have going for them: simple says simple. Compare this animation with the Collaborate video above, and you’ll see what I’m saying. A three-minute video with multiple people talking, versus a three-screen tour with a single animation per screen? Which looks simpler to you?

The other thing that works well with this animation is the text that accompanies it — there’s one sentence per animated element. That is, one sentence per screen. In the space of, say, 15 seconds, I know what the app does.

One snag here: I have to infer the benefits for myself. The tour, the home page, is entirely feature-focused.

Testimonials are a great way to show one key thing: how happy your brand makes the people who interact with it.

As you can probably tell, I’m a bit of fan of a well-chosen testimonial for showing, rather than telling.

Want to take showing, rather than telling, to a whole new level?

Let people play with your product or service through a free trial. This is the one of the best kinds of showing, as it’s experiential and user-driven. The user buys into the showing by showing your product to themselves. How can you make sure they see all the hawtest functionality? Build some initial pointers into the interface to show them where to find the good stuff, or how simple and easy key functionality is to use. Many mobile apps build small feature highlights in as “tours”; they’re handy for desktop products, too.

Trials really are the ultimate in showing, not telling.

I know what you’re thinking. “But words are the enemy if we’re showing, not telling. You can’t show with words!”

Not so, friend. But look, we’re out of space. Next week, though, I’ll show you (!) how you can write text that shows, rather than telling.

3 Ways to Show, Not Tell, with TextGeorgina Laidlaw