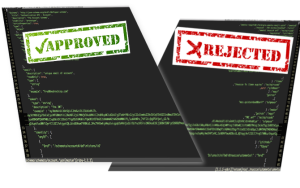 In my previous post, I went through the paces of creating a JSON Schema to describe the JSON that my service will accept and return. The process leans on the prmd gem to supply the initial JSON Schema templates, as well as validation and document generation. All in all, it’s a process that feels like it should be more automated. I went through a fair amount of pain to get the schema created, manually defining types and links in my text editor. At the end of the effort, I have a .json file that describes what my API will accept and return, as well as matching Markdown documentation to boot.

In that post, I made promise of something better. A land where writing unit tests that verify the JSON returned by my Rails API is possible. A land where the production application will reject requests that do not conform to our JSON schema. Does that sound like a wonderful place? It does to me.

This post will build that land, showing you how to feed the schema into tools provided by the committee gem, using those tools to verify tests and application requests.

I am using the same application as the prmd post. It’s a Rails API application that provided account information. It is not a complete app, as the examples here don’t require it. You can peruse the app to see the full schema. For today’s purposes, we simply need:

Check out the Gemfile for the gem’s I am using. The most important one is the committee gem, obviously.

OK, down to brass tax. I want to make sure that the AccountsController is returning appropriate responses based on my JSON Schema. Let’s look at the simplest link in the schema:

The /account/#{account.id} path is a GET request with a response that looks like:

(Note: current_account is a simple helper that finds the account based on params[:id])

Here is the start of a spec:

How do we write a test that validates the response? This is what the response to a /accounts/#{account_id} looks like, currently:

Clearly, this isn’t what we want. Luckily, the committee gem provides test methods in Committee::Test::Methods, which needs to be included into the spec:

The method we’re most interested in for this spec is called assert_schema_conform. There is a mild amount of shoe-horning to get that matcher to work in Rails, as the method expects schema_path, last_request, and last_response to exist. The RSpec let syntax makes this simple:

schema_path points to the JSON Schema file generated with prmd. last_response and last_request are conventions from Sinatra testing.

Running the specs (rspec) results in the following:

BOOM! That’s what we want. The spec complains that the response does not include data. Let’s change how the account is serialized:

This will work great, I am sure of it:

What the what??? OOOOH riiiight! I forgot that I defined the account ID as a UUID, which is a string:

We’re using UUIDs for the account identifier, but I didn’t implement it that way in the app. Since the JSON Schema was reviewed and agreed up on by the team, it is correct and the “source of truth”. We had a couple of situations in our efforts where the agreed upon schema was NOT what was being returned by the implementation. It probably saved us a couple of rounds of oops-fix-deploy, which made the whole effort worth it. Furthermore, it motivated the team to keep the schema in sync. </moraleOfStory>

Back to our test, after going through the steps to make id a UUID (this is harder than it should be for SQLite3, btw), the tests pass. Check the repo for the UUID steps.

Committee will also validate that the request path is in the schema links. As an example, if I change the JSON Schema GET account path to /account/{id} (I removed an ‘s’) and rerun the specs, the result is:

Excellent. Committee will test for valid links (path and method) and response format. We’ve now realized one of the major benefits that Committee offers.

Here, there’s quick check that the schema file exists, then the middleware is engaged. Each middleware has a its own set of options that allow some fine tuning.

Committee::Middleware::RequestValidation takes the following options (straight from the README):

Let’s use curl on our application to see how this works:

Whoa! What’s that? Seems like we have a discrepancy between what the specs are returning and what the application actually returns. Hmph. Well, let’s use this as a chance to point out the response validation working coughs.

In a real app you should be using a serialization framework, like active_model_serializers or roar, so you’d likely avoid this issue.

The important takeaway here is that an invalid request won’t get to your controller. That is called failing fast and all the cool kids are doing it.

Committee::Middleware::ResponseValidation has the following options (again, straight from the README):

The most interesting option here, to me, is error_class. This allows you to specify a class to use to return errors. We really wanted this option so our errors could be JSON API compliant.

We already saw an example of response validation working, so let’s move on to what else Committee brings to the party.

One very cool feature of Committee is the ability to stub out a server based on the JSON Schema. If we add the following line to config/application.rb:

and start the server, we can hit any of the links defined in our JSON schema without having to implement them. This is crazy cool.

I can issue a curl request and get back the expected result:

The response relies on `examples` being defined for each field in the JSON schema file.

Committee also provides a committee_stub executable that will launch a server based on the same schema file:

And, BANGO, working API server. How cool is that?

The obvious use case here is the ability to provide a “working” implementation of the server to other teams or designers while you work on the implementation.

The committee gem provides some desperately needed functionality to any team creating API servers in Ruby. While today’s examples use Rails, both the prmd and committee gems were created for pliny, which is a Sinatra-based framework. If you are creating APIs, you need to start treating the JSON like it’s a grown-up part of the application. PRMD and Committee give you the tools to do just that.

If you have any thoughts or think I got something wrong, please let me know in the comments.