You’re probably already familiar with automated testing and its benefits. Having a set of tests for your application allows you to make changes to your code with confidence, knowing that the tests have your back should you break anything. It’s possible to take things a step further and write your tests before you “>write the code; a practice known as Test-driven development (TDD).

In this tutorial, we will talk about what TDD is and what benefits it brings to you as a developer. We’ll use TDD to implement a form validator, which ensures that any values input by the user conform to a specified set of rules.

Note that this article will focus on testing front-end code. If you’re looking for something focused on the backend, be sure to check out our course: Test-Driven Development in Node.js

Test-driven development is a programming methodology with which one can tackle the design, implementation, and testing of units of code, and to some extent the expected functionality of a program.

Complementing the test-first approach of Extreme Programming, in which developers write tests before implementing a feature or a unit, TDD also facilitates the refactoring of code; this is commonly referred to as the Red-Green-Refactor Cycle. 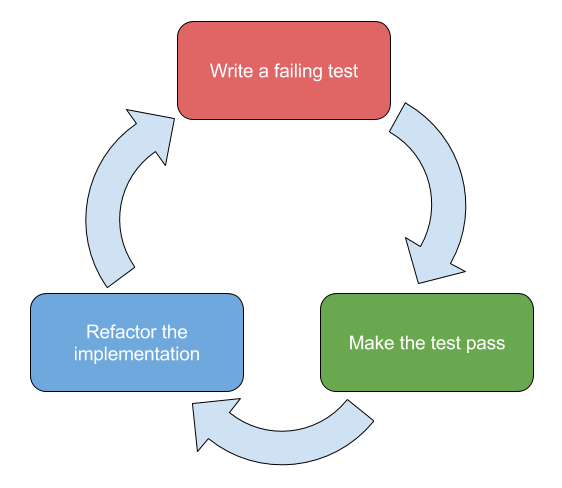 I’ve used TDD to some extent since I was introduced to it at the beginning of my career, but as I have progressed to working on applications and systems with more complex requirements, I have personally found the technique to be time-saving and conducive to the quality and robustness of my work.

Before proceeding, it might be worth familiarizing yourself with some of the various types of automated tests that can be written. Eric Elliot summarises them well:

By writing test cases for a feature before its implementation, code coverage is immediately guaranteed, plus behavioral bugs can be caught earlier in the development lifecycle of a project. This, of course, necessitates tests that cover all behaviors, including error handling, but one should always practice TDD with this mindset.

Referring to the red-green-refactor cycle above, any changes to an implementation can be verified by ensuring that the existing tests continue to pass. Writing tests that run as quickly as possible will shorten this feedback loop; while it’s important to cover all possible scenarios, and execution time can vary slightly between different computers, authoring lean and well-focused tests will save time in the long term.

Test-driven development allows developers to consider how an API will be consumed, and how easy it is to use, without having to worry about the implementation. Invoking a unit in a test case essentially mirrors a call site in production, so the external design can be modified before the implementation stage.

As long as one is frequently, or even automatically, running tests upon changing the associated implementation, satisfying existing tests reduces the likelihood of unnecessary additional code, arguably resulting in a codebase that’s easier to maintain and understand. Consequently, TDD helps one to follow the KISS (Keep it simple, stupid!) principle.

No dependence upon integration

When writing unit tests, if one is conforming to the required inputs, then units will behave as expected once integrated into the codebase. However, integration tests should also be written to ensure that the new code’s call site is being invoked correctly.

For example, let’s consider the function below, which determines if a user is an admin:

Rather than hard code the users data, we expect it as a parameter. This allows us to pass a prepopulated array in our test:

This approach allows the unit to be implemented and tested in isolation from the rest of the system. Once there are users in our database, we can integrate the unit and write integration tests to verify that we are correctly passing the parameters to the unit.

With the advent of full-stack software written in JavaScript, a plethora of testing libraries has emerged that allow for the testing of both client-side and server-side code; an example of such a library is Mocha, which we will be using in the exercise.

A good use case for TDD, in my opinion, is form validation; it is a somewhat complex task that typically follows these steps:

There is a CodePen for this exercise that contains some boilerplate test code, as well as an empty validateForm function. Please fork this before we start.

Our form validation API will take an instance of HTMLFormElement (<form>) and validate each input that has a data-validation attribute, the possible values of which are:

We will write an end-to-end test to verify the functionality of validateForm against real DOM nodes, as well as against the two validation types we’ll initially support. Once our first implementation works, we will gradually refactor it by writing smaller units, also following TDD.

Here’s the form that our tests will use:

Between each test, we create a new clone of the form to remove the risk of potential side effects. The true parameter passed to cloneNode ensures that the form’s child nodes are also cloned:

The describe('the validateForm function', function () {}) suite will be used to test our API. Within the inner function, write the first test case, which will ensure that legal values for both the alphabetical and numeric rules will be recognized as valid:

Upon saving the changes to your fork, you should see the test fail:

Now let’s make this test green! Remember that we should endeavor to write the minimum, reasonable (no return true;!) amount of code to satisfy the test, so let’s not worry about error reporting for now.

Here’s the initial implementation, which iterates over our form’s input elements and validates the values of each using regular expressions:

You should now see that our test passes:

Below our first test, let’s write another which verifies that the return result object’s error array contains an Error instance with the expected message when an alphabetical field is invalid:

Upon saving your CodePen fork, you should see the new failing test case in the output. Let’s update our implementation to satisfy both test cases:

Once you’ve witnessed the test fail, update the validateForm function:

Finally, let’s add a test to ensure that multiple errors are handled:

Given our error handling implementation for the second and third test, this new case should pass immediately. You can confirm that you’ve followed the steps correctly by verifying your implementation against mine.

Although we have a working function that is covered with tests, it emits a number of code smells:

Fortunately, as we’ve written the functional tests for our validator function, we can make our code better with the confidence that we won’t break it.

Let’s use TDD to write separate functions for:

By mapping our NodeList of HTMLInputElements to objects representing the name of a form field, the type against which it should be validated, and the value of said field, not only will we decouple validateForm function from the DOM, but we’ll facilitate validation rule lookup when we replace our hard-coded regular expressions.

For example, the validation query object for the first-name field would be:

It should include the single test case:

Once you’ve witnessed this fail, write the code for the implementation:

When this passes, update validateForm‘s for loop to call our new function and to use the query objects to determine the validity of our form:

If both our new test and the existing tests pass, as demonstrated in this pen, then we can make a bigger change; decoupling the validation rules.

To remove our hard-coded rules, let’s write a function that takes our rules as a Map and asserts the validity of our inputs.

We’re explicitly passing a Map of rules to our implementation from the test as we want to verify its behavior independently of our main function; this makes it a unit test. Here’s our first implementation of validateItem():

Once this test has passed, write a second test case to verify that our function returns false when a validation query is invalid; this should pass due to our current implementation:

Finally, write a test case to determine that validateItem returns false when the validation type is not found:

Our implementation should check if the specified validation type exists in the validationRules Map before testing any values against their corresponding regular expressions:

Once we see this test passing, let’s create a new Map above createValidationQueries, which will contain the actual validation rules used by our API:

Finally, let’s refactor the validateForm function to use the new function and rules:

Hopefully, you’ll see that all of the tests pass. Congratulations on using test-driven development to refactor and improve the quality of our code! Your final implementation should resemble this Pen:

By following TDD, we have been able to take the initial implementation of our form validation and separate it into independent and understandable parts. I hope you’ve enjoyed this tutorial and take this practice forward with you into your everyday work.

Have you used TDD on a real-world project? What did you think? If not, has this article persuaded you to give it a try? Let me know in the comments!

If you’d like to learn more about TDD with JavaScript, check out our short mini course Test-Driven Development with Node.js.

ES2016: Should the Future of JavaScript Be Developer-Driven?Tim Severien, Moritz Kröger