IFTTT has huge potential in its ability to connect devices quickly and easily. There was one thing it had been missing for a while – the ability to send and receive generic HTTP GET and POST requests. If you wanted to use IFTTT for something, the specific use for it had to be defined by IFTTT and published on their site within a channel. That is, until now!

IFTTT recently released the Maker Channel. It is exactly what developers have been waiting for! It allows you to define triggers that are set off when they receive a HTTP request, along with actions that can make a HTTP request to a defined location. This opens up IFTTT to be used for virtually anything. It is now completely up to the imagination of the developer community.

To show what the Maker channel is capable of, we are going to set up a simple Arduino to communicate back and forth with IFTTT via Node.js. To experiment with sending triggers to IFTTT, we will toggle a LIFX lightbulb on and off via an Arduino powered light switch. To try out an IFTTT Maker action, we will connect an RGB LED to our Arduino which will change color any time we are mentioned on Twitter. Don’t like Twitter or don’t have a LIFX bulb? Not a problem at all, switch out the action/trigger with something else on IFTTT. Work with the Facebook channel instead of Twitter or trigger actions on your phone instead of a lightbulb. This is a lot of fun to tinker with.

If you are new to IFTTT, I previously covered the basics in my article on Connecting LIFX Light Bulbs to the IoT Using IFTTT. This article assumes you know all about triggers and actions, and now are ready to take it to the next level!

If you’re keen to get straight into the code and try it out, you can find it here on GitHub.

How This Will Work

We are going to have a local Node.js server running with an Arduino connected via USB. Pressing a button on the Arduino set up will trigger a HTTP request to IFTTT to tell it to toggle our LIFX light. Our Node.js server will also have Express running to handle any incoming HTTP requests. Whenever IFTTT sees a new mention of us on Twitter, it’ll make a POST request to our server to trigger our Arduino’s LED.

We’ll be connecting up a simple button and an RGB LED to an Arduino.

Setting Up The Maker Channel

To get started, we will need to go to the Maker Channel on IFTTT and click “Connect”. Once it is set up, you’ll reach a screen that looks like so: 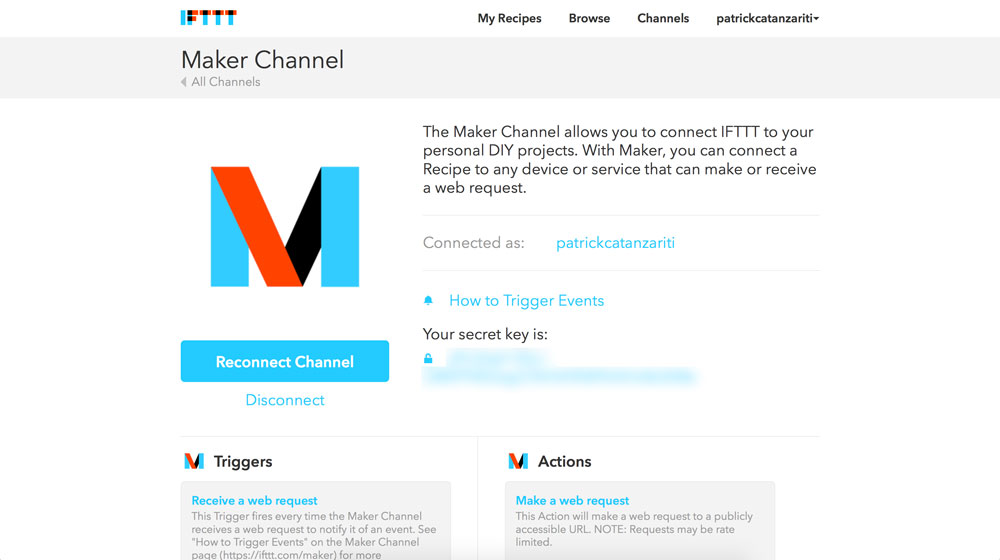 On this screen, it provides your secret key you’ll need to trigger IFTTT actions via HTTP commands. Of course, you’ll need a bit more info than just the key, we need a URL to POST to that’ll trigger the action. To find this, click the link that says “How to Trigger Events”. It’ll open up a page that contains the URL you’ll want to use, conveniently with your key attached to it. 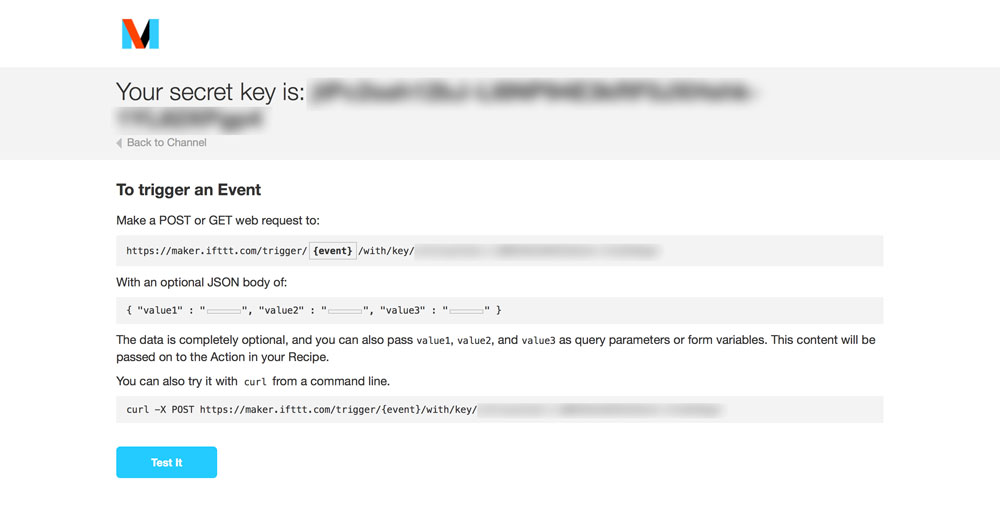 The URL we’ll be using for our LIFX bulb looks like this: http://maker.ifttt.com/trigger/light_switch/with/key/{{yourkeyhere}}. The URL part which says light_switch is our event name. We use this when putting together our IFTTT recipe. If you’re not triggering a LIFX bulb, choose a name that matches your event more accurately.

Our Maker channel is active and ready to be used. We will begin by looking at how to toggle our IFTTT action – toggling a LIFX lightbulb on and off using a button from an Arduino.

Making the recipe itself is quite simple:

In our Node.js code, we use johnny-five to access our Arduino. When the board is ready, we define our button connected to pin 7 in the btn variable:

Within the board’s ready event, we set up a watch for the button’s down event. If we detect the button has been pressed, we log that click to the console for debugging purposes (in the situation where a wire on the breadboard comes loose or something along those lines, having these console logs can save a lot of time!). Then, we use the npm module request to make a HTTP POST request to the URL we found above. We’ve got console logs upon its success for debugging purposes also.

Upon running the code, when we click the button and the request is successful, it should switch our LIFX lightbulb on and off! IFTTT will return a nice message that will look like so in our console.log:

It is really simple to put together but has a lot of potential.

One thing to note – if you want to make a call to the IFTTT service via HTTPS, you’ll need a properly secured HTTPS server too. I had errors when using a local test server, so it may need to have a certificate that isn’t self signed.

We now can trigger IFTTT actions via Node.js and our Arduino. Let’s look at how to do things the opposite way – making our Arduino respond to IFTTT triggers. We’ll set up IFTTT to tell our Node.js server and Arduino whenever we are mentioned on Twitter.

We put together the recipe the other way around:

The screen with our HTTP request settings will look like so:

Within our Node code, we set up our LED so that our johnny-five module knows about it and set up the server to listen for that POST request. It will respond to it by changing our LED.

Within the board’s ready event, we define our LED attached to pins 9, 10 and 11 within the variable of led like so:

The code might look odd as the pins count down from 11 rather than up. The reason for this is I prefer my wiring to have red, green and then blue from top to bottom on the Arduino board (e.g. 11, then 10 and 9).

We set its initial color to green:

Outside of the board’s ready event, we create our routing for the /led POST request using express. Within the callback function for this route, we get the JSON data sent from IFTTT inside req.body and find the color key within it. We give that color to johnny-five‘s led.color() function to change the color of our LED to what we’ve been given. We log the JSON data in our console too.

Something to keep in mind – If you’re putting this on a publically accessible server that will be available for more than just test purposes, I’d recommend checking that the JSON data being provided is actually a color and is a legitimate request.

If you run the Node server and then recieve a tweet at your account, after a little while (it won’t be instant as it seems to take time for IFTTT to refresh that info from Twitter at times), your LED should go Twitter blue! In your console.log, you should see something like the following:

Then, if you set up various other services along the same lines but with different colors, you can have a wide variety of LED color changes!

Having the ecosystem of IFTTT and all of its channels available to makers of any internet enabled technology that can send and receive HTTP requests is huge. Whilst we’ve been able to do things like include the Twitter API into Node.js applications for a long time now, this provides a whole range of possibilities in an API that is much easier to use and is incredibly modular. Switch out Twitter for something else and everything should still work with only a few adjustments!

If you make some really neat IFTTT Maker Channel creation from this guide, leave a note in the comments or get in touch with me on Twitter (@thatpatrickguy), I’d like to take a look!

Automating LIFX Lights With The LightBlue Bean and IFTTTPatrick Catanzariti

Connecting to the Jawbone UP API with Node.jsPatrick Catanzariti