This article was originally published in February 2015, and was updated in 2018 to adjust the version, as well as other minor edits and additions.

Users arriving at a website are focused as much on the visual design of a website as they are on the content they are hoping to find there.

Traditionally, designers and developers have used individual images/sprite-sheets for their icons; these graphics were a series of pixel-perfect images that would be used in specific parts of the site (such as in the search bar, on navigational elements, as loading icons, etc).

Displaying icons with images/sprites worked well for a long time (and many websites will still use them). However, with the focus on responsive design more important than ever, the challenge has been providing stunning iconography that looks great regardless of your device.

What Are Font Icons?

Font icons are a way in which we can display fully responsive, customizable icons on our website without the use of additional images or sprite-sheets.

Font icons are exactly what they sound like, a font made up entirely of icons.

Why Would I Use Font Icons?

Traditional images have worked well historically, but icon fonts give us a greater amount of flexibility and let us more easily manage our icons, and do so with responsiveness and ease.

Font Icons can be styled, positioned and manipulated

Here is a random example of an icon font; no images required.

With all the great free icon fonts out there, very little reason exists to use traditional images for icons anymore. However, there are still some debatable downsides to icon fonts.

Getting Font Awesome into Your WordPress Project

Font Awesome is included in thousands of projects across the Internet, including WordPress themes (such as SitePoint’s own Base Theme) and plugins. Integrating Font Awesome with WordPress, be it a theme or plugin, is exceptionally easy and requires just a few steps to get up and running.

Use a Local or External Copy of Font Awesome

There are two main options for getting Font Awesome in your project; you can either load the files on your web server or just link to the externally hosted stylesheet on a CDN.

Click the download link on the Font Awesome home page and get the zip file. Inside the zip file, you will see the fonts and the required CSS file (there are also LESS/Sass files but we are not going to be using them).

Your zip file should have the following resources that you will need to move over to your project (move them into their own applicable directories via FTP). Create a directory in your theme or plugin called ‘fonts’ and another called ‘css’ and move the files into these directories.

Link to a Hosted CDN

Hosting with a third party CDN makes the process that much easier; all you need to do is create a function inside your functions.php file and attach that function to the wp_enqueue_scripts action. Inside this function you will just enqueue the stylesheet (except this time you will reference the externally hosted link):

How to Use Font Awesome (and Icon Fonts in General)

Font Awesome can be used in two different ways. Which way you implement it is completely up to you, and the needs of your project.

A Pseudo Element (a CSS Method)

Using a pseudo method for adding your icon involves using the :before or:after pseudo CSS selectors to style your desired HTML element.

What you do is determine the element you want to apply your icon to and create a CSS style either before or after the element and manually set the icon that will be used (along with its style and design).

Each font in an icon font set has a unique code that represents the icon; this code is Unicode and tells the browser that you want to display the character that corresponds to this code. You would create your pseudo element and set its font to use your font icon family, and you would then set its content value.

The main properties you need to set are content and font-family to their respective values (so that the pseudo element will appear).

Here is a sample of the output:

Since we wanted to display the multi gear icon we used to Unicode for that icon. Each of the Font Awesome pages will show the Unicode reference you need to include; this example the Unicode is \f085 as indicated on its sample page.

An Inline Element (an HTML Method)

When you use a font icon this way it will generate a pseudo element before/after the targeted element and generate the styling for the icon.

If you want to display an icon you need to assign the fa class to an item (generally elements such as i and span work the best). This class connects your item to the Font Awesome font.

Once your item has the base fa class you can then add the class name that corresponds to the icon you are trying to display; for example, if you wanted to display the camera icon you would also add the fa-camera-retro class. Choosing this corresponding icon class will look up the icon font and display its unicode character (its glyph).

Once you have your icon rendering you can create more fancy elements using additional Font Awesome classes to apply sizing, rotations, colours and styles.

You could build a simple navigation menu using the predefined Font Awesome classes and styles:

This would generate a simple vertical navigation menu as shown below: 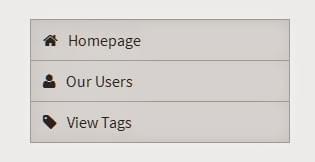 You can also stack icons together to create different looks. As an example, here is a series of social media buttons:

You should see a series of social media icons that look like this:

Stacked icons work by wrapping your icons around another element and applying the fa-stack class to it.

The icons that you want to stack will need to use the fa-stack class also. You can specify the sizing you need by using the size classes such as fa-stack-1x and fa-stack-2x so that they stack correctly together.

Now that you know the fundamentals of getting icon fonts to work in your project, you can expand your designs and hopefully remove older image/sprite based icons in favor of these new fully responsive techniques!

How To Create an Awesome WordPress Page for Your PluginJérémy Heleine