Following hot on the heels of its recent announcement that it would add support for Java to the support already given to apps written in Ruby, Node.js and Clojure, Platform-as-a-service provider Heroku this morning announced a breakthrough partnership with Facebook that effectively allows anyone with a Heroku account to become an adept, cloud-based Facebook app developer.

To give SitePoint readers a head start, we’ve obtained permission to publish the following tutorial, drawing on functionality in Facebook that is only available from today.

Let me hand you over to Adam Wiggins of Heroku.

This guide is for Facebook developers who are creating apps on Heroku via the Facebook Cloud Services integration. It assumes no previous knowledge of Heroku. Heroku is a cloud application platform, not an old-fashioned web host, so some things may be unfamiliar to you.

This article will walk through every part of the process: creating an app and a Heroku account, setting up local development tools, and deploying changes to your Facebook app.

(If you’ve already created a Heroku app via Facebook, you can skip to the next section.)

Start by going to Facebook Developers and clicking Create New App in the upper-right corner:

Fill out the captcha in the subsequent dialog and click Submit. After a brief delay you’ll be taken to your (currently blank) Facebook app settings page. On this page, under Cloud Services, click Get Started:

Heroku is the only option in this dialog, so click Next:

If you already have a Heroku account under your selected email address, the new app will be associated with your existing account.

Choose your favorite programming language from the dropdown (PHP, Ruby, and Python are available). Enter the email address you wish to use for your Heroku user account, then click Create:

You’ll be taken to a success dialog showing the new URL of your Facebook app running on Heroku: 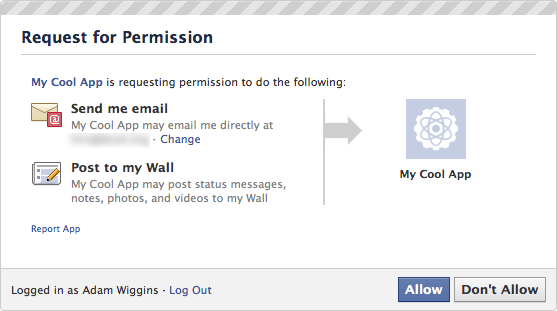 A template app, written in the language you chose, has been copied and deployed just for you! Click the URL or Go To Page to visit your new app.

Other users visiting your app will need to grant permission via a similar dialog. Users only need to do this the first time they visit the app.

Because you’re visiting your app as a user, you need to grant permission for the app to access your Facebook profile by clicking Allow:

Congratulations! You now have your very own Facebook app, running on Heroku:

The app shows examples of accessing the Facebook API to list friends, photos, interests, and more. Once you start editing the code, you can use these capabilities to make your app do more interesting things.

So now we want to get you set up for editing your app. We’ll get to that shortly, but first, a brief aside.

(If you’re already familiar with Heroku, you can skip ahead.)

Your Facebook app needs to run somewhere. This can be traditional hosting such as your own hardware or a VPS; however, these options are time-consuming and costly to set up. Apps on Heroku can be created instantly, and they cost you nothing unless the app grows to a large amount of traffic or users.

Heroku is a cloud application platform. With Heroku, you don’t need to think about servers at all. You can write apps in the programming language of your choice, back it with add-on resources such as SQL and NoSQL databases, Memcached, and many others. You manage your app using the Heroku command-line tool and you deploy code using the Git revision control system. Take a tour of the Heroku architecture.

Any kind of web app can be deployed to Heroku, and you can read all about the platform’s capabilities in the Heroku Dev Center. For the rest of this guide, we’ll focus on editing the Facebook app you’ve already created in the previous section.

(If you already have a Heroku account and the local development tools set up, you can skip to the next section.)

Although an account as already been created for you, and the app has already been deployed, you still need to create a password and set up local tools to begin editing it.

A Heroku user account was created for you when you created an app through Facebook. Check your email under the email address you used to the welcome message from Heroku:

When finished, close that browser window and proceed to the next step.

To manage and edit your app, you’ll need the Heroku command-line tool and the Git revision control system, both of which will be installed by the Heroku toolbelt. Download and install the toolbelt for your OS from the list below:

Press enter at the prompt to upload your existing ssh key or create a new one, used for pushing code later on.

With your Heroku account and local tools set up, you can start making changes to your Facebook app.

We’ll start by grabbing a copy of your app’s sourcecode using Git. You’ll need to know the name of your app for this: Heroku gave it a randomly-generated haiku name to start with, so look in the URL to find your app name. For example, if your URL is http://furious-robot-218.herokuapp.com, then your app name is furious-robot-218. Paste this into a git clone command like so:

The directory output shown above is from the PHP sample app. Other languages will have different files.

Let’s tweak something small in the app and push it back up to Heroku, illustrating the deploy process. For example, find the line of HTML which shows the welcome banner (in the PHP app, this is in index.php line 157), which should look like this:

Use your favorite text editor to change this line to:

Save the file, then use your terminal to commit the change to Git:

Now, the fun part: pushing our modified app up to Heroku, so that anyone who visits the app on Facebook sees the new version. Push it to Heroku with Git:

Now view the app in your browser. You should see the changed welcome banner:

In the previous section, we pushed changes to the app to the live production environment without testing it in a local environment. A better workflow for working on your app is to run the it locally, test there, and commit changes as you make improvements that you’ve tested as working. When you’re ready to deploy, use git push heroku to push up changes to the live production app.

Methods for running your app on your local computer will vary by programming language and your own choice in local development environment. For example, PHP developers on Mac OS X can use the version of Apache and PHP that comes with the operating system by putting a checkout of the app’s code into the Sites subdirectory of their home folder, and configuring a VirtualHost in /etc/apache2/users/USERNAME.conf. Ruby developers, on the other hand, will probably run their app with Foreman and visit it at http://localhost:5000/.

Regardless of how you run your app locally, there are two techniques you’ll need to know about that are specific to running a local development version of a Facebook app.

The Facebook app you previously created points at the URL of your Heroku app (which will look like https://furious-robot-218.herokuapp.com). This is the production app.

For development, you’ll need to register another app with Facebook. Unlike the first app, this one will not run on Heroku, but instead will run on your local workstation and have a URL like http://localhost:5000/ (or whatever URL you’ve configured for your local machine).

Go to Facebook Developers and again click Create New App. Choose a name to indicate that this is the development version of your existing app. For example, if your other app is named “My Cool App”, you might call this one “My Cool App – Dev”.

On the same settings page for your app used to set the website URL, you’ll also find the App ID and App Secret:

These were automatically added to your Heroku app as config vars, but in your local environment you’ll need to set them as environment variables. How you’ll set env vars depends on your OS and method of running your app. Here are two examples:

If you run your app with Foreman, it will automatically source a file named .env in the root of your app’s code checkout. Cut-and-paste your App ID and App Secret into .env:

You should also exclude .env from source control by appending this line to your .gitignore`:

If you’re running your app with Apache, you can set the env vars for your local app’s VirtualHost using the SetEnv directive. For example:

With these two changes in place, you should be able to visit your app locally and access all Facebook functionality. When you’re ready to share your changes in the world, git commit them and then git push heroku, then visit your production app to confirm that your changes work correctly on the live app.