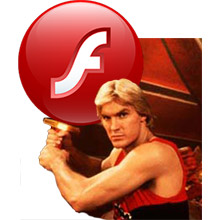 JavaScript has been used for a number of unusual projects in the past few years. We’ve had NES emulators, Spectrum emulators, and even Amiga emulators. But a Flash player?… What’s the point of emulating a browser plugin within a browser?

It’s not as bizarre as it sounds. There is one very good reason for a JavaScript-based player: the Flash plugin isn’t available on all platforms. Most notably, you can’t run Flash on a iPhone or Apple’s new iPad.

“Gordon” is a cleverly-named project by Tobias Schneider which hopes to rectify the situation. It translates Flash SWF files to Scalable Vector Graphics which are supported on the iPhone. The project runs on most modern browsers with the exception of Internet Explorer (which doesn’t offer native SVG support … yet).

Gordon currently supports the SWF 1.0 format and SWF 2.0 is in development. There are several demonstrations available and, although they’re simple, they work well and show the potential.

Of course, all this work might be in vain if the real Flash plugin appears on the iPhone. But that seems fairly unlikely — Steve Jobs has little regard for Flash and states that it runs too slowly on the device. It’s also a competitor to the standard iPhone/iPad applications platform.

However, Gordon has been tested on the iPhone and it runs fast enough even though it’s built on interpreted JavaScript code. If the project becomes a success, the human centipede rapidshare, there will be nothing Apple can do to prevent Flash running on the device. Could that provide developers with another reason to desert iPhone applications?

Have you tried Gordon? Could it ever be a viable alternative to the Flash plugin on unsupported browsers? Should Adobe hire the developer immediately?!

Can Great Apps Be Written in PHP – An Interview SeriesMatthew Setter

Remove the Flowplayer Icon on the playerSam Deering