This article was peer reviewed by Tim Severien and Joan Yin. Thanks to all of SitePoint’s peer reviewers for making SitePoint content the best it can be!

They also offer custom APIs that bring the following advantages:

Sounds great? Then let’s get started. In this article, we’ll become familiar with NW.js in practice and learn how to create a hybrid application. An example application that was built using the instructions from this article can be found on GitHub.

Advantages of NW.js in Comparison to Electron

First, there’s one thing to mention: NW.js isn’t the only framework for hybrid apps. There’s another competitor called Electron. It started in 2013, two years after NW.js, but because it’s from GitHub it quickly became well known. Now you might be interested in the differences between them. Here are the advantages of NW.js compared to Electron:

However, Electron also has some advantages worth mentioning:

There’s also a fundamental difference. NW.js applications specify their entry point in the form of an HTML file. This HTML file will be opened in the GUI directly.

Electron applications, on the other hand, specify a JavaScript file as their entry point. This JavaScript file is opened in a separate main process, and can then open an HTML file in the GUI. This means that you could theoretically run Electron apps without a GUI. Also, closing the GUI won’t close the main process; you’ll need to terminate it manually by calling an API method.

While Electron opens the door for desktop applications written with JavaScript and without a GUI, NW.js applications are probably easier to set up, in case you just want to display an HTML-based application.

Note: If you really prefer the advantages of Electron, check out SitePoint’s recent article on creating desktop apps with Electron.

Let’s start creating our application that we’ll later compile to a native application. Because there are many ways to set up a web application — with various JS languages (TypeScript, CoffeeScript, etc.), module loaders (RequireJS, webpack, SystemJS, etc.), frameworks (AngularJS, React, Vue.js, etc.) and preprocessors (SCSS, LESS, Haml, etc.) — and everyone has their own favorites, we just use the basic technologies HTML, CSS and JS (ES6 standard).

There’s no boilerplate (starter project) for NW.js that’s open for any setup. All of them are built for a specific framework, module loader or preprocessor. Therefore, we implement a simple NW.js application from scratch ourself. It’ll be easy to understand, and you can later easily customize it to your needs, or switch to a boilerplate.

First, we need to create our project structure and files:

Now that we’ve created the project structure and files, we can start with the NW.js manifest file src/package.json. According to the documentation, the file basically requires just two properties, name, the application name, and main, a path to an HTML file that’s used as an entry point. But we add further information such as the path to the icon of the window, as well as a min width and height to make sure users don’t see any unexpected things:

That’s it! The application will later open src/views/main.html at the start, since the main path is relative to the manifest file.

We could, at this point, program a to-do app. But we want to focus on NW.js and its features. For this reason, I prefer to let you decide the functionality of our app. I’ve created an example project NW.js-examples on GitHub to demonstrate several NW.js features, such as Node.js integration and clipboard access. Please feel free to use it in your application to play around. But you can also use something else.

For whatever you decide, you must at least create the src/views/main.html file, since it’s our application entry point. It can look like something like this:

In a real application, you’d probably have several other view files and load them with Ajax.
For the sake of simplicity, you can also create native hyperlinks and reference the other HTML files. For example:

Then, create the something.html file within src/views/. Here’s how I did this in my example project.

We’ve now created our NW.js project, including the manifest and a main view. We finally need a method to run NW.js in development directly on our development machine and implement a build process that generates native applications for several operating systems.

For this, we need the following two packages:

Since they aren’t related to our actual app (they’re just for development purposes and the production build), we create them as devDependencies in our second package.json in the root folder beside the required name and version fields:

Now we just need to run the following in the root folder of the project to install the devDependencies:

To ease packaging, we add npm scripts to our package.json file. They allow us to run CLI commands, defined on the right side with a shortcut on the left side using npm run. We add two scripts, one for development and production:

This shortcut will call the command we’ve defined in scripts under dev, using the nw package. A new window should be opened directly on your development machine showing src/views/main.html.

The production build will use nw-builder, which supports outputs for Windows, Linux and macOS. In our example, we build a package for all these platforms, in both 32 and 64 bit versions. For macOS, it’s currently only possible to build 32 bit in legacy mode. (See this issue on GitHub.) Therefore, build 64 bit only.

Like running NW.js directly, this will use our CLI command defined in scripts.

It will take a while … 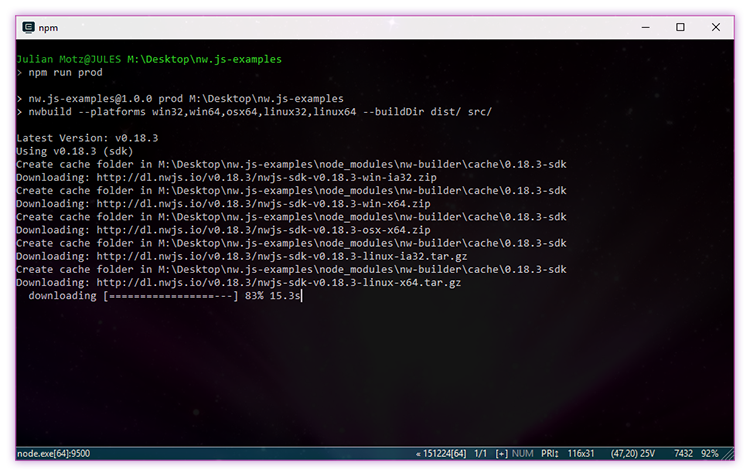 Once it’s finished, have a look at your dist/ folder. It should look like:

Since NW.js is based on Chromium, manually testing is as simple as in Chrome. When you encounter a bug — visual or functional — you can open the Developer Tools with keyboard shortcut F12 or programmatically using: 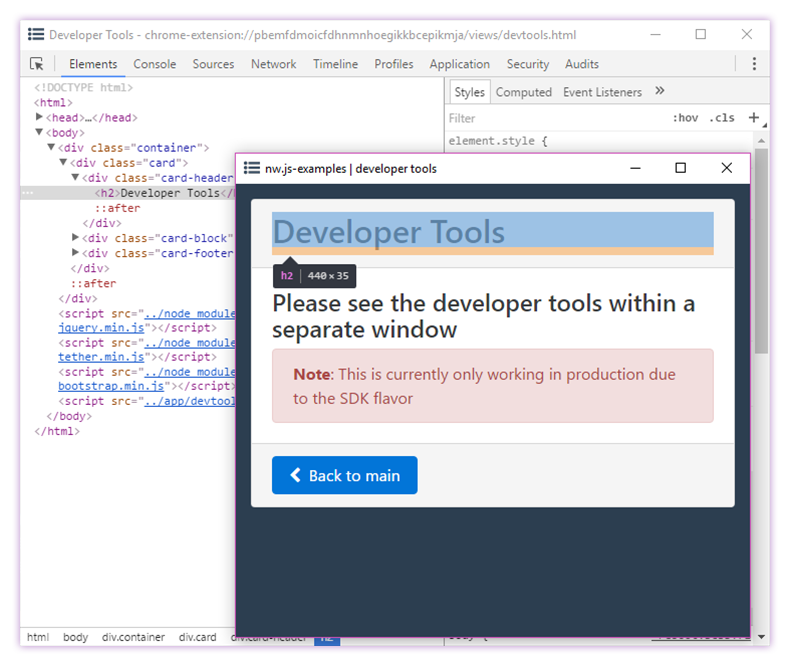 Note that this requires the SDK build flavor. If you want to disable the Developer Tools in production, you can build NW.js with a different flavor or suppress the F12 event. 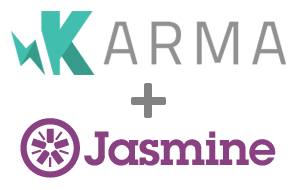 If your application doesn’t use NW.js-specific API methods, you could theoretically remain at your usual web application workflow — for example, using Karma as a spec runner in combination with Jasmine as a testing framework.

But if you’re using a NW.js-specific API method, you need to run your tests in a NW.js application to make sure the API methods are defined. One way would be to use a NW.js launcher plugin for Karma, such as karma-nodewebkit-launcher. It works like with any other browser launcher plugin for Karma: it opens the application within the NW.js container to perform checks, and then closes it automatically.

However, since NW.js isn’t headless (in contrast to something like PhantomJS), it always requires a physical display. This means that running the tests on a pure CLI server isn’t possible. Luckily, you can use Xvfb in these cases to simulate a display. This works on Travis CI, for example. For Jenkins, you need to install the Xvfb plugin. Follow this issue on GitHub for more information.

Hopefully this article has given you an insight into the advantages and use cases of NW.js. There are so many reasons why using a hybrid app is better than something like distributing a .zip folder with HTML files that then run from the file system. NW.js may also be used as a replacement for your native applications, since you don’t need to concentrate on complex GUIs, and you have many built-in features, such as a video player. Since you can detect the environment, it’s also possible to develop an application that runs on both a normal web server and on the client machine using NW.js. And with a few tricks, and thanks to a powerful Chromium engine, users will hardly feel the difference to a native application.

When creating a new NW.js project, first determine the frameworks, module loaders and preprocessors you want to use — depending on what you’re familiar with — or just start from scratch. With these decisions made, you can find a NW.js boilerplate that fits to your needs. If there’s no boilerplate that suits, you may use an application based on this tutorial as a basis.