This series of articles will introduce you to two of Apple’s latest technologies, Swift and SpriteKit. Swift is a new programming language promoted as the “language for the future of Apple software development“. SpriteKit is Apple’s first game development framework that is standard with its SDK. It supports iOS starting from version 7 and Mac OS X.

We will not be discussing every detail, instead you will learn the fundamentals of Swift by creating a simple game. For a detailed discussion of the language, there is Apple’s official book on the subject. Although not a requisite for this course, it is a highly recommended read if you are serious about learning Swift.

As for SpriteKit, we will not be using it extensively in our game. We only need its most basic capabilities to display simple sprites on the screen. The focus of this course remains on Swift.

The game that you will be creating is inspired by a very popular puzzle game from the 80’s. You’re most likely familiar with this game and might have even played it once or twice, or more if you are a fan of the game like me. Here’s a sneak peek at what you are going to make: 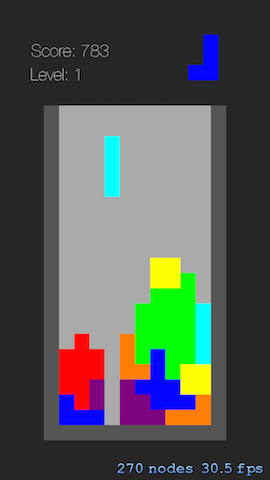 Anyone interested in learning Swift is welcome. You don’t have to be aiming for a career in game development to benefit from this series. Creating a simple game is not an intimidating first step in introducing someone to a new technology. Learning becomes more effective when you’re having fun, and I hope you do have fun during this series.

You don’t have to be an expert programmer to be able to follow along. A fundamental knowledge of programming concepts such as variables, constants, control structures and other basic constructs are and their purpose is more than enough to be comfortable with the discussions.

With the recent releases of iOS 8.1, OS X Yosemite, Xcode 6.1, and a plethora of new Apple devices, now is definitely a good time to start learning them and investing in the future of Apple software development.

You will need at least Xcode 6. If you have an older version, download the latest Xcode from the Mac App Store. Let’s create and set up the game project:

Before building and running the project, perform a Clean operation first by pressing ⇧ + ⌘ + K (shift + command + K) to remove previous builds of the project that may still contain the resources we already removed.

When you run the project you’ll be presented with a blank view. In the next section, we will start drawing something on this blank screen.

Take a quick look at the short gameplay animation in the Introduction. Did you notice a pattern? A quick analysis of our game will tell us that everything in it is built with squares or blocks. Quite literally, blocks are the game’s building blocks!

These blocks are systematically arranged to form a finite set of shapes called tetrominoes. But before we attempt to draw these more complex tetromino shapes, let’s focus first on the simpler task of drawing a single block.

Go ahead and update the default code in the GameViewController.swift file with the one below. Do not copy & paste though. Instead, try to determine which lines are new and which ones were removed or replaced. Manually typing and proactively selecting which code to add will give you a better feel for the language as well as improve your learning.

Only a handful of new code was added while several lines of unneeded code were removed. Toggle the Version Editor to see a detailed view of all the changes you made. You may also commit these changes to your repository either via the terminal or Xcode’s built in Source Control commands. If you are not yet comfortable working with Git, then don’t worry about performing any repository procedures in your code. It’s not required in this series but is a good habit to acquire early on.

The first thing you’ll notice especially when you’re coming from a C, C++, or Java background is the lack of semicolons. Python developers on the other hand will welcome this familiar style.

Semicolons in Swift are not required. Meaning you can, but you don’t have to put them at the end of every statement, except when you’re combining two or more statements on the same line:

But for the sake of code readability, avoid combining several statements in one line.

Unsurprisingly, import lets you import or access code from an external source and use it in your own projects. In our case, we want to utilize the SpriteKit framework so we declare this at the beginning of our source code file.

After importing the framework we need, we declare a class named GameViewController which inherits from UIViewController. The UIViewController class handles the view management for our game. You can learn more about this class and other framework classes by ⌥ + clicking (option + click) on their names.

As a subclass, GameViewController may alter or extend the predefined behavior of its superclass. In this case, we override the superclass’ viewDidLoad function to perform our own operations. For a class’ function, the more accurate term to use is method.

Functions in Swift are defined using the func keyword followed by the function’s name, parameters, return type then the function’s body enclosed in braces. As for viewDidLoad, we describe it as a function that takes no parameters and returns nothing.

We will learn more about functions and methods as we move along with this series. Expect to encounter examples that contain more elements such as return types and parameters.

Swift is a major advocate of immutability which adds another layer of protection from errors brought by unintentional modification of values. We use the let keyword to declare immutable values or constants.

On the other hand, we use the var keyword for mutable values or variables. Here’s the previous statement written as a variable declaration. However, we only declare variables if we are sure that their values will change at some point in our game.

Swift sets the type of your variables and constants during compile time using type inference. This mechanism enables the compiler to determine the appropriate type of a variable or constant by checking the value being assigned to them.

If you always set an initial value to your constants and variables, then you don’t have to explicitly declare their type every time.

Properties of skView can be accessed using dot syntax. We put a dot at the end of the instance name followed immediately by the property name.

Here, we set some helpful diagnostic information to show up in the view. Note however that the FPS (Frames Per Second) information is only accurate when the game is tested on an actual device, not on the simulator.

Comments allow you to annotate your code to aid in readability and clarity for the benefit of everyone involved in the project. Comments are also used to conveniently disable certain parts of your code without deleting them entirely.

There are two ways to write comments, multiline and single line. The default code provided by Xcode includes a single line comment expressed in a multiline syntax:

This can be more conveniently expressed as:

Unless you find the comment too long for a single line and prefer to split it into two separate lines:

As for this line of code, we set skView‘s ignoresSiblingOrder property to true because we are not concerned about rendering order and there will be no overlapping elements in our game.

I intentionally did not put any of my own comments in the code to avoid duplicating what is already explained in the tutorials. However, you are advised to make writing sensible comments a habit and part of your workflow along with version control.

We create a new instance of a class using the initializer syntax. The simplest form of which is to pass nothing to the class name by using an empty parentheses.

But in our case, we need to pass in a size value based on the view’s bounding rectangle. Notice the use of the named parameter size which is required when initializing a new instance of a class. This is a useful language feature carried over from Objective-C to aid in readability.

Enumerations, as with classes, also define a custom type but for a group of related values. Here, .AspectFill is one of the values defined by an enumeration type.

Notice .AspectFill‘s lack of a prefix. This is another demonstration of type inference. Looking deeper into scene‘s scaleMode property by ⌥ + clicking (option + click) on it in the editor, we find out that it is declared as a variable of type SKSceneScaleMode which is an enumeration containing .AspectFill as one of its members.

This means we can also express this as:

But such verbosity is not required in Swift.

Method access uses the same dot syntax as property access. You invoke a method the same way you invoke a function, passing in parameters within a set of parentheses.

After covering a lot of the basic structure of Swift in this installment, next we’ll be covering drawing to the GameScene and much more!