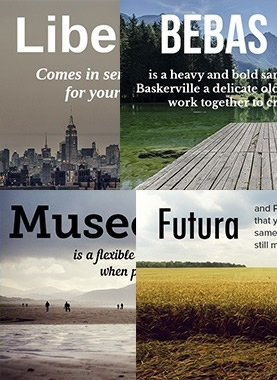 The number of amazing typefaces keeps growing and growing — there are new ones debuting every single day. It’s easy to get distracted and select your favorite fonts at random to use in your work. What’s harder is that if you want to make it to the top of the design field, you’ll need to master the art of effectively pairing typefaces.

When you’re dealing with pairing typefaces, there are 3 types of relationships between fonts that you need to guide you through the pairing process:

The designer’s main rule of thumb is to try to achieve concordant or contrasting type, but avoid conflicting type. Below we’ll break down all 3 concepts into a set of easily followed rules for picking typefaces to pair.

This is the simplest way of pairing fonts, because all you need to achieve concordance is one really excellent font in a couple of different styles. 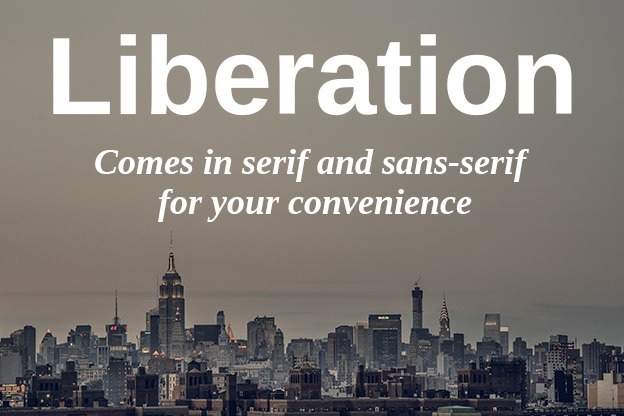 Liberation is a handy superfamily (Image by Matthew Wiebe via Unsplash)

The way to start by picking a font superfamily. A superfamily is a typeface with multiple variations, which fall into different style categories. There are thousands of classifications for type out there, but most often they’re separated into four categories, under which there are endless subcategories:

A common superfamily contains typefaces that come in both serif and sans-serif format. A famous example of this is the Lucida font. It includes versions in Blackletter (Gothic), Handwriting, Sans Serif, Typewriter, and Calligraphy (script) — all in the same family.

Because these typefaces are designed to fit in the same family, they share key characteristics that help them work well together, which makes this the easiest way to pair fonts in a design.

The key to using concordance is that you should experiment with this! It doesn’t just have to be a serif and a sans-serif paired. Try one bold and one italic, part all caps and part lowercase, work with different sizes. And there are tons of superfamilies around, some awesome ones include Museo, Fruitiger, and Rotis.

This is a more difficult way to pair fonts, but can often be a more original and successful method for making your type use unique. The key is to find types that are different, but still have enough in common that they can work together. Even if your typefaces are completely dissimilar, if they share one or two of these attributes it can make the difference between a successful and failed pairing:

Remember — these are just a small selection of the ways in which typefaces can relate to one another. There are tons more! For more details on typography terminology, check out Alex’s post Crash course in typography: Know your terms.

Check out some examples of successfully contrasting pairs: 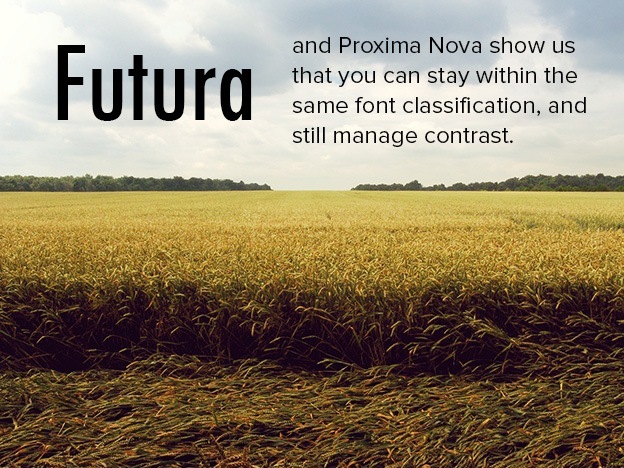 Just because serif and sans-serif go well together, doesn’t mean that they can’t function on their own, either. The perfect example is Futura and Proxima Nova, who share a lack of serif, but not a weight or shape of character (image by Cornelia Büchse via Unsplash). 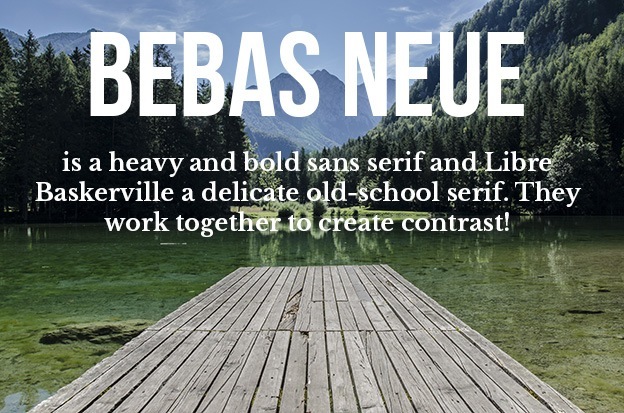 Bebas Neue is a bold all-caps sans-serif, while Libre Baskerville is a transitional serif. While they definitely don’t have x-height, weight, or shape of character in common, they do share a similar direction of axis. So they contrast, but it works (image by Ales Krivec via Unsplash). 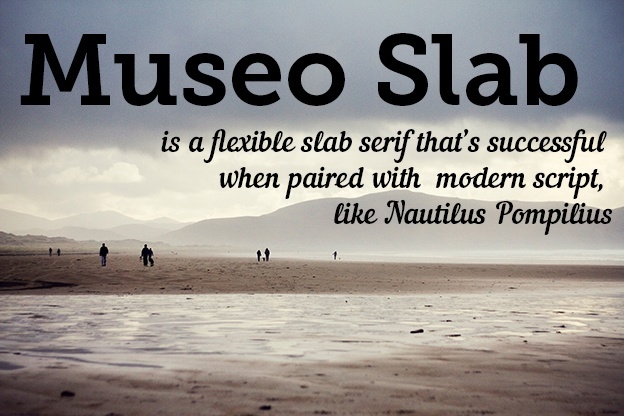 They’ve both got a lot of unique character, but despite their Museo Slab and Nautilus Pompilius manage to play off one another, sharing enough of a similar weight to maintain a fun balance (image by Ruxandra Mateiu via Unsplash)

While you do want your text to have some similarities, there is a point where you can go too far. Where there’s not enough difference to allow the fonts to work together, creating an awkward conflict. 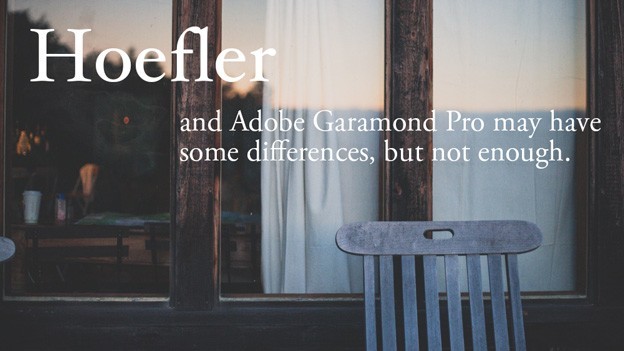 Hoefler and Adobe Garamond are both beautiful texts on their own, but sharing so many similarities makes them incompatible when it comes to font pairing (image by Logan Adermatt, via Unsplash)

Though there is no single source of rules listing what designers should and shouldn’t do to be pairing type (because rules were meant to be broken), there are some guidelines that designers follow more often than not.

Kaitlyn is part of the Community Team at 99designs. She grew up in Boulder, CO and went to school at Northwestern University in Chicago. When she's not blogging, she spends her time having adventures and being generally creative. She's all about having new experiences as often as possible!