Opera’s developer version 38 is the first browser to include a built-in Virtual Private Network (VPN) client. The feature is unlikely to excite the masses but it could change the way we surf the web.

A Virtual Private Network extends your home or company network across the public internet. Imagine you have two computers connected to your home router — PCa and PCb. They’re on the same physical private network, can see each other and share resources such as printers.

Now imagine you moved PCb to the other side of the world. Unless you had a very long Ethernet cable, you couldn’t attach it to the same router — it will be on a different private network.

VPN client software can be installed to establish a virtual network between the remote locations. PCa and PCb would, in effect, be on the same internal network again. Encryption is used to ensure other systems cannot eavesdrop on their communications.

Open-source software such as OpenVPN and Freelan is available, but setting up your own VPN can be a little daunting. Fortunately, there are dozens of VPN services that make the process easier. These services generally charge a monthly fee and may limit bandwidth.

How Does a VPN Help Web Browsing?

In a word: privacy. You’re no longer connected directly to a website; you’re connected to a VPN. As far as your ISP is concerned, you have a single active connection to that VPN and nothing else. The benefits include:

How is a VPN Different from a Proxy Server?

Privacy can be enhanced in a similar way by routing all web requests and responses via a proxy server. The main difference is that VPNs are more complex; traffic is always encrypted and will never pass data such as the originating IP address.

You possibly don’t need a VPN for your whole system and every application. VPN extensions such as Hola, TunnelBear and Betternet provide a simpler alternative which hide your surfing activity in a single browser. Differing costs and service levels will apply and your access speeds can be affected.

Opera 38 is the first browser to offer a free, unlimited, native VPN client following the company’s takeover of SurfEasy in March 2016. It’s currently available in the developer edition, but will be rolled out to the standard version within a few months.

To activate the VPN, select Settings (Windows) or Preferences (Mac/Linux) from the menu then choose Privacy & Security. Ensure Enable VPN is checked: 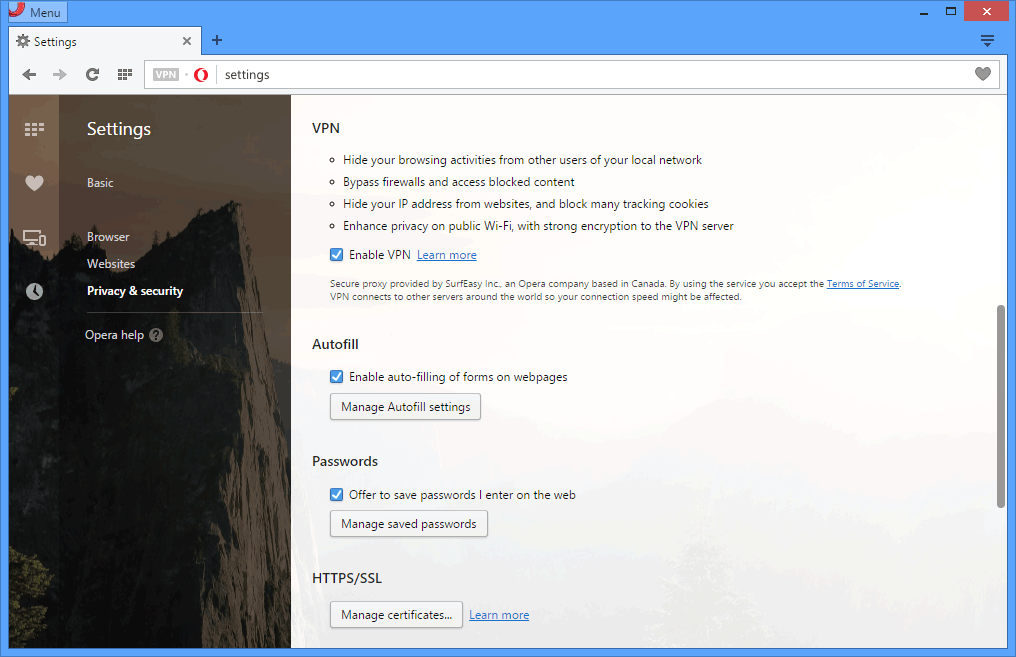 A VPN icon will appear in your address field. Click this to review your data usage or change your VPN location. Currently, the USA, Canada and Germany can be selected, with more regions coming later in 2016 when the stable version of Opera 38 is released. 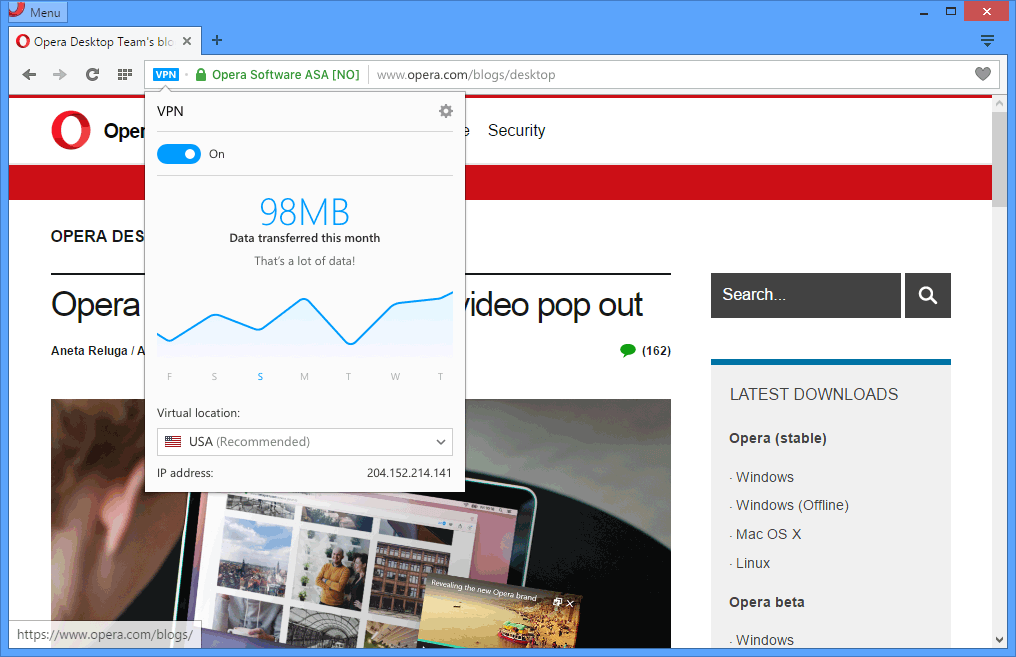 VPN access is normally slower than using a standard network connection, but you will have to assess if it’s noticeable. Historically, Opera has provided a fantastic infrastructure for services — such as Opera Mini, which renders pages server-side, and the old Turbo Mode which compressed assets prior to download. Whether they’ll be able to support a fast VPN service once the whole of China realizes they can bypass the country’s firewall is another matter! …

A New Age of Private Surfing?

The web industry’s privacy proposals have often been underwhelming. Few bothered to comply with initiatives such as the Do Not Track (DNT) header, and moves toward ubiquitous SSL encryption have been lethargic.

Private, secure browsing is not new. The technologies have become easier but are still beyond the knowledge and capabilities of most users. Opera is the first mainstream browser to offer a built-in Virtual Private Network that can be enabled by anyone.

It will be interesting to see whether other vendors follow Opera’s lead. Opera is based in Norway, which is (mostly) outside US and EU jurisdiction. Would the NSA permit Google, Apple or Microsoft to offer a similar service in their browsers? Some will argue that browsing shouldn’t be private if you have nothing to hide …

Get a Lifetime of Secure Browsing from SlickVPN for $40SitePoint Offers