One of the more interesting features introduced with iOS 9 was Universal Links. Supporting this feature in your app allows any links to content on the web to be seamlessly opened in the app itself. If it isn’t present on the device, the system falls back to using Safari to open the link.

This is great for a variety of reasons :

In this article, I’ll show how to setup your own server, and handle the corresponding links in your app.

The server app will be a simple Rails app that displays a list of authors and some of their books. The easiest way for you to get started is to clone the app on Heroku, just click the button below.

If you don’t want to take this option, you can also deploy the app yourself by cloning the app on Github and push it to a host of your choice.

You can see the app in action here. By default, it shows a list of authors. Clicking on any author displays a list of books written by them.

Just having a server running online isn’t enough. To securely associate your iOS app with a server, Apple requires that you make available a configuration file, called apple-app-site-association. This is a JSON file which describes the domain and supported routes.

Note: .json should not be appended to the file name.

The keys are as follows:

There are 3 ways to define paths:

The order in which the paths are mentioned in the array is important. Earlier indices have higher priority. Once a path matches, the evaluation stops, and other paths ignored. Each path is case-sensitive.

Each domain supported in the app needs to make available its own apple-app-site-association file. If the content served by each domain is different, then the contents of the file will also change to support the respective paths. Otherwise, the same file can be used, but it needs to be accessible at every supported domain.

Note: This means that if you need both example.com and www.example.com supported in your app, the association file should be accessible at both these domains.

If your app targets iOS 9 and your server uses HTTPS to serve content, you don’t need to sign the file. If not (e.g. when supporting Handoff on iOS 8), it has to be signed using a SSL certificate from a recognized certificate authority.

Note: This is not the certificate provided by Apple to submit your app to the App Store. It should be provided by a third-party, and it’s recommended to use the same certificate you use for your HTTPS server (although it’s not required).

To sign the file, first create and save a simple .txt version of it. Next, in the terminal, run the following command:

This will output the signed file in the current directory. The example.com.key, example.com.pem, and intermediate.pem are the files that would made available to you by your Certifying Authority.

Next is the app, that mirrors the server. It will target iOS 9 and will be using Xcode 7.2 with Swift 2.1.

The app will talk to the server and display the following:

The app code can be found on Github.

This is how the app looks: 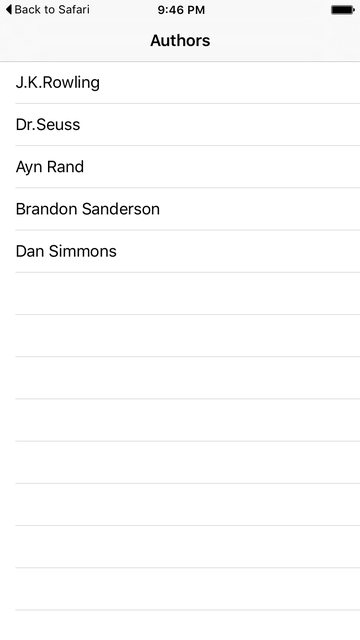 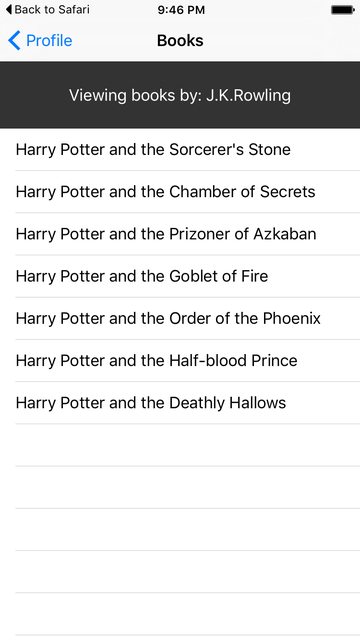 If you intend to create your own instance of the sample server and clone the iOS sample app, make the following changes:

The setup on the app side requires two things:

The first step in configuring your app’s entitlements is to enable it for your App ID. Do this in the Apple Developer Member Center.

Click on Certificates, Identifiers & Profiles and then Identifiers. Select your App ID (create it first if required), click Edit and enable the Associated Domains entitlement.

Next, get the App ID prefix and suffix by clicking on the respective App ID. 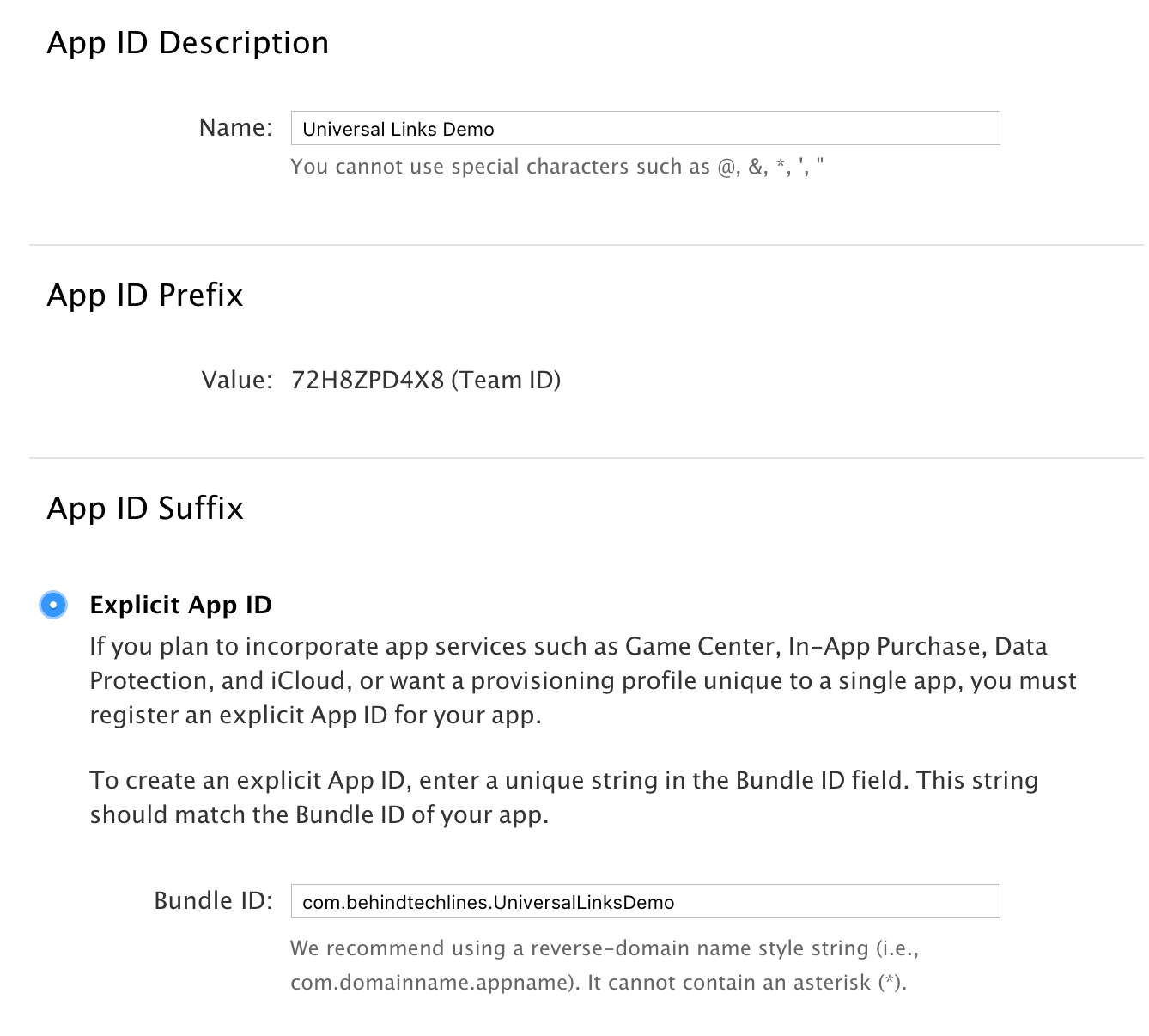 The App ID prefix and suffix should match the one in the apple-app-site-association file.

Next in Xcode, select your App’s target, click Capabilities and toggle Associated Domains to On. Add an entry for each domain that your app supports, prefixed with applinks:.

Note: Ensure you have selected the same team and entered the same Bundle ID as the registered App ID on the Member Center. Also ensure that the entitlements file is included by Xcode by selecting the file and in the File Inspector, ensure that your target is checked. 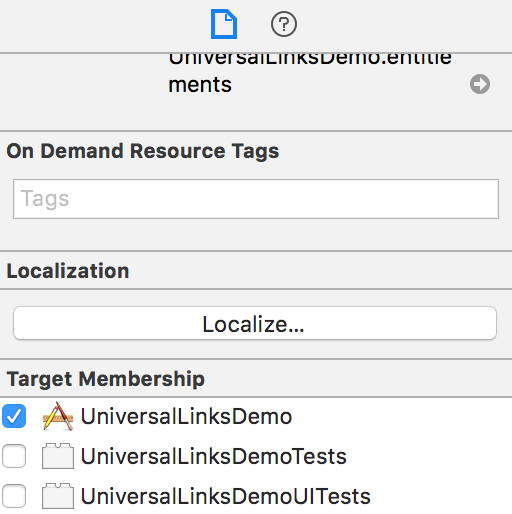 application:continueUserActivity:restorationHandler: in the UIApplicationDelegate method in AppDelegate.swift handles incoming links. The method gives an NSUserActivity object, with an activityType value of NSUserActivityTypeBrowsingWeb and a webpageURL property containing the URL. You parse this URL to determine the right action in the app.

For example, in the sample app:

The SHNURLRouter library matches the incoming links and takes the appropriate action.

If you have your own server instance running and associated with your app, you can now test Universal Links.

Generally, any supported link clicked in Safari, or in instances of UIWebView/WKWebView should open the app. A good testing source is the read me of a Github repo. You can fork and edit any of the sample apps in this article.

If you don’t have your own server or just want to see this in action, click the links in the read me here.

Note: For iOS 9.2 and less, this will only work on a device. iOS 9.3 (still in beta at the time of writing) also supports the simulator.

You can save the links in any app that supports opening them, for example Telegram, and proceed from there.

Note: iOS remembers the user’s choice when opening Universal Links. If they tap the top-right breadcrumb to open the link in Safari, all further clicks will take them to Safari, and not the app. They can switch back to opening the app by default by choosing Open in the app banner on the website.

And that’s about it. Not much code to it, but a lot of configuration. A key takeaway is that you need control of your own server to support Universal Links. If you do, it’s the best way to transition your user from your website to your app.

Any questions or comments, please let me know below.

Arvindh is an iOS developer who has published multiple apps on the iOS and Mac App Stores. An accountant by qualification, he found his true calling with Software Development, and now works as lead iOS developer with Real Image Media Technologies in India, building apps in the media and entertainment domains.