One of the most exciting and groundbreaking technology products at the moment is the Microsoft HoloLens. The ability to show real time 3D holograms mixed seamlessly with any physical environment opens up endless new possibilities for modern computing. I have just scratched the surface of the holographic rabbit hole and, considering the hardware has just started shipping as a US$3,000 developer kit, it is safe to say that the best is yet to come.

If you can’t wait for the general availability release and want to delve into HoloLens app development today, then there is good news! The tooling is already available, it is free and you don’t even need a HoloLens to get started.

As HoloLens runs Windows 10, apps are built for the Universal Windows Platform (UWP), which means that UWP apps written for mobile devices, desktops, Xbox and other platforms will also run on HoloLens. There are two main tools you need to create holographic experiences — Visual Studio 2015 and Unity 3D. You will use these alongside the SDK and emulator. In total, you will need the following:

Once you have installed these tools, you are ready to create your first holographic experience.

Although the HoloLens runs UWP apps, which are in turn written using C# and Visual Studio, the unique aspect of HoloLens apps is the 3D holograms. These are created and modeled in your favorite 3D software, but if you are like me and don’t have a clue how to create 3D models, there are services you can use where professionals will create them for you. Unity even has their own 3D model asset store. I will include a short introduction to Unity, however it is a huge topic. SitePoint has some other Unity articles to get you started.

Unity 3D allows you to import and manipulate 3D models, and manage events and scripts for each object. You can control the lighting, the surroundings (known as the “scene”) and every other aspect of the world you want to project to your users. Unity is not easy to master, but there is no way around it if you want to create HoloLens apps.

You can create basic shapes in Unity by going opening the GameObject menu, going to 3D Object and choosing the 3D object you want. 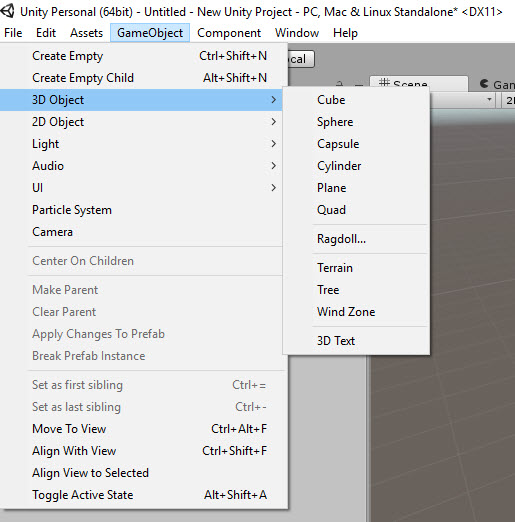 Choosing a sphere creates a basic sphere shape in your scene, which you can then manipulate, animate and control. 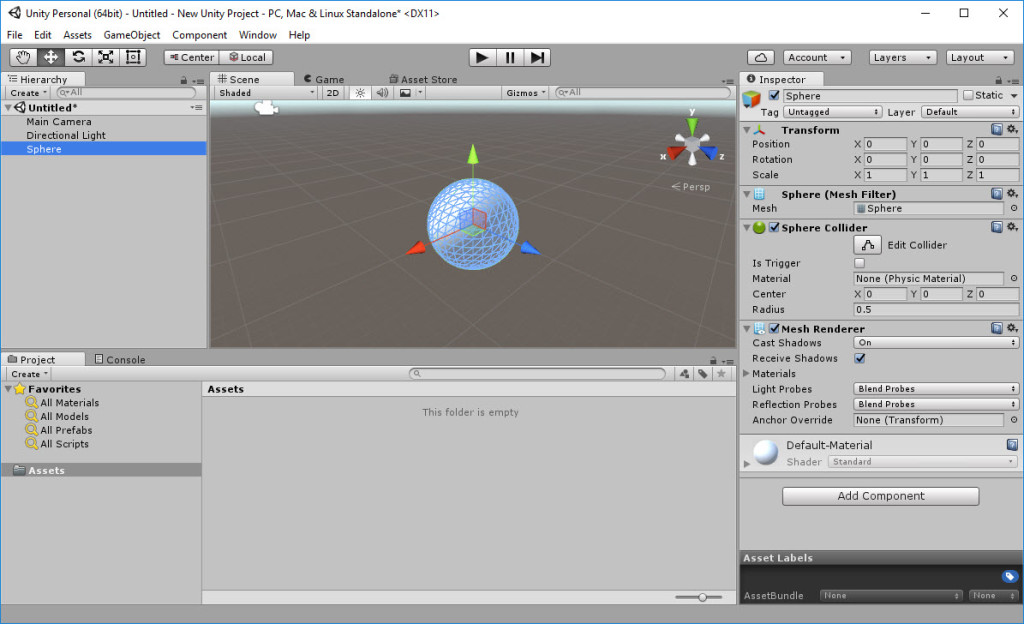 The main way to interact with the 3D objects in a holographic experience is to attach scripts to the objects. You do this by creating a new script in Unity. 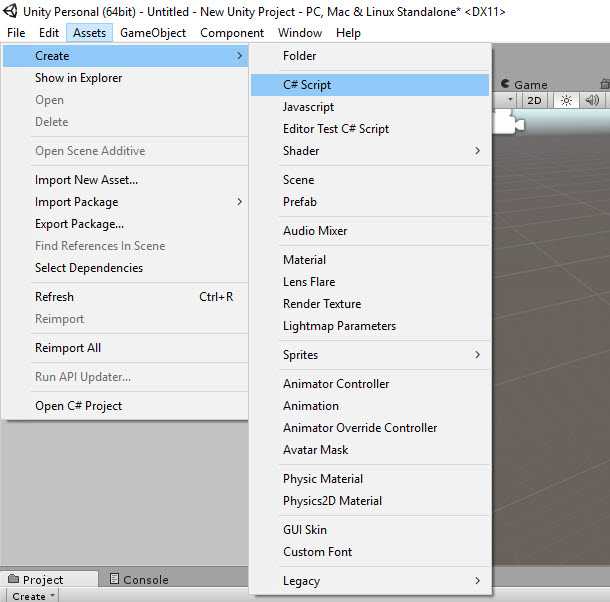 You can edit this script in Visual Studio by double-clicking it.

The Start method is called when the app starts and sets up any events or initialization code. Update is called once per frame and is where you detect interactions such as collisions, RayCast hits and other user interactions.

To attach the script to an object in Unity, drag and drop it on to it. The code in the script will execute appropriately when the methods are called. This could be on start, when a user speaks a voice command or any other event in your holographic experience.

To run the holographic app, you need to import the project into Visual Studio and Unity can create a full UWP app solution for you. Use the following build settings from the Build Settings menu. Make sure you open Player Settings, select Virtual Reality Supported, and make sure the Windows Holographic SDK is present. 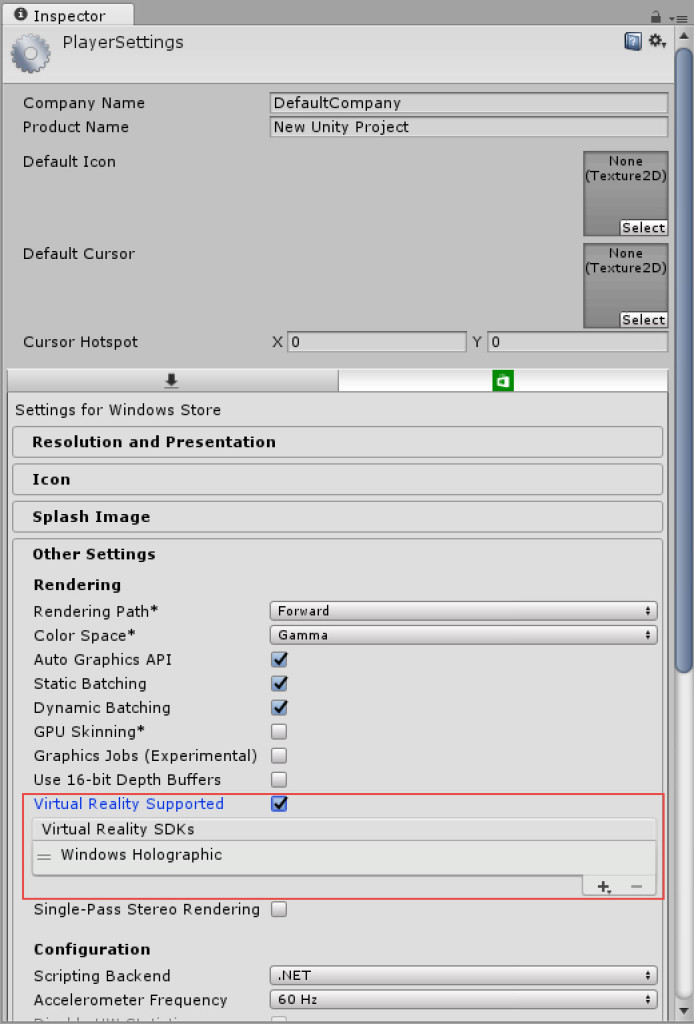 When you hit Build, Unity will create a full UWP app solution in a folder you choose. You can open this solution in Visual Studio. 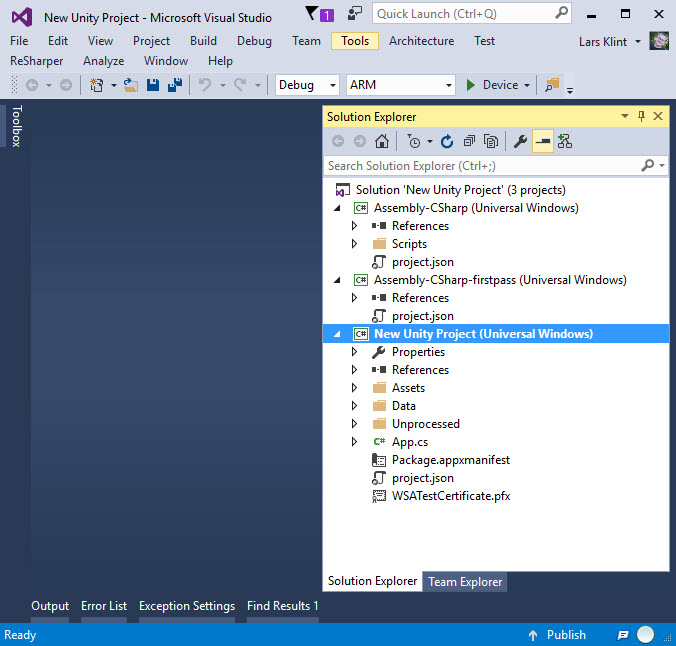 By default, Universal Windows Platform apps exported from Unity will run on any Windows 10 device. Because HoloLens is different, the app should take advantage of features that are only available on HoloLens. To do this, you need to set the TargetDeviceFamily to “Windows.Holographic” in the Package.appxmanifest file in Visual Studio as shown below.

And now you can run the solution in the HoloLens Emulator. 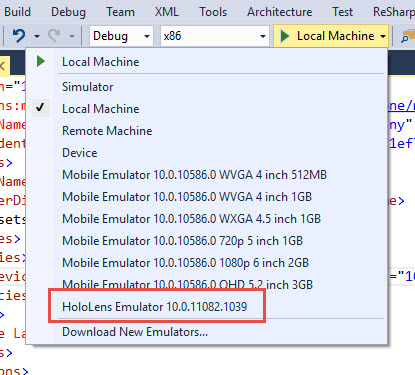 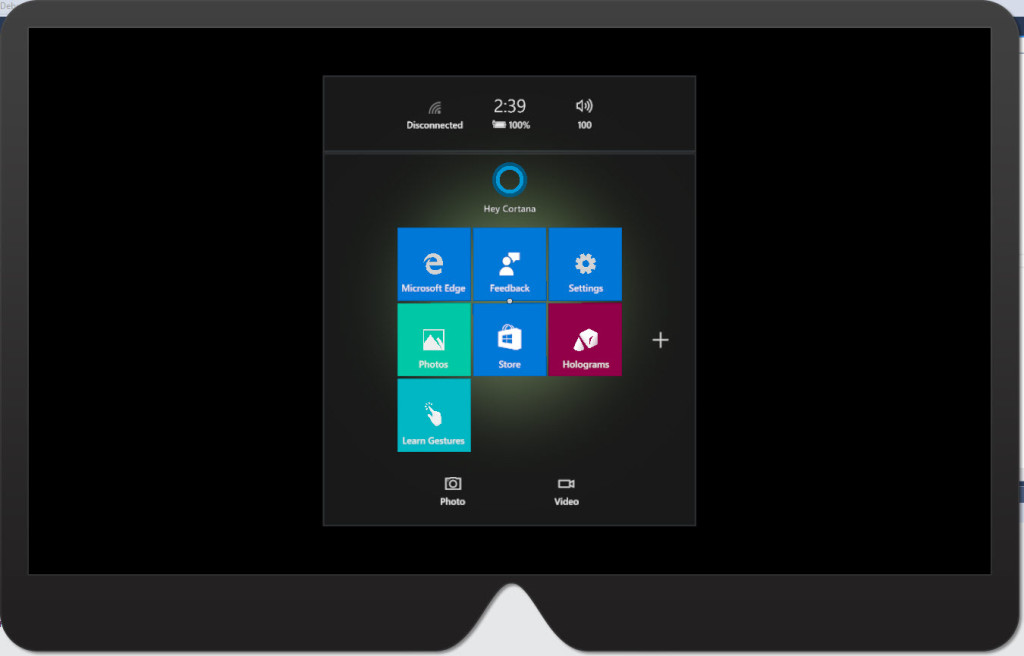 Now that you know the workflow for creating a 3D workspace, can add models and apply scripts to these models, it’s time to look at the main areas of interaction with holograms in HoloLens apps.

The gaze is the first form of input into HoloLens apps and is how you put focus on holograms. It is the center of the field of view when a user looks through the HoloLens, and is essentially a “mouse cursor”. You can design this cursor any way you want, so it could be contextual to your app, a company logo or any other 3D shape. Bear in mind that HoloLens uses the position and orientation of your user’s head, not their eyes, to determine their gaze vector. It’s like a laser pointer that comes straight out from the center of the HoloLens.

The cursor is a 3D object as well, and you need to code it to behave like the cursor. Create a new script in Unity and attach it to your model, then use code similar to the below:

The important part of the code is the RayCast object. This is the “laser beam” mentioned above and is the test to see if your user is looking at an object. If there is a hit, you show the cursor and make it “hug” whatever surface it is on.

Once you have targeted an object with gaze that you wish to interact with, you can use gestures to perform the actual interaction. The most common gesture and one that comes free is the “tap”. This is like clicking the left mouse button to invoke an action on the object. It’s possible to perform more complex gestures, such as “tap and hold” to move objects in 3D space.

Create another script in Unity and include code similar to the below. The script is then linked to the root of your project, as you want gestures to be global in the app and interact with any 3D object.

The main object to notice in this snippet is the GestureRecognizer. It’s in charge of recognizing the gestures that users of your app perform. Here you register the TappedEvent to pass up the OnSelect event to an object whenever tapped.

The Update method continually checks if any object is being gazed on and sets the object in focus, to send a tapped event to the object if tapped.

My favorite way of interacting with the HoloLens (or at least the emulator) is to use voice. As well as the “See it Say it” rule, you can create your own phrases the HoloLens will recognize. When the app recognizes a particular phrase, an event fires, which you can use to handle what the action for the phrase is.

The object that does all the heavy lifting here is KeywordRecognizer, whose constructor takes the keywords as an Array. Every time it recognizes a phrase, the OnPhraseRecognized event is raised and the action of the keyword invoked. When a user says “Reset World” the message OnReset is broadcast and when “Drop Object” is said, the OnDrop event is sent to the object being gazed at.

The last main part of creating holographic experiences is immersive audio. It isn’t a way for users to provide input, but is a way to show to users what is happening in the experience and what they should pay attention to.

Adding audio is technically not difficult, but adding audio that is both appropriate and relevant to the experience is hard. The SDK will take care of positioning the sound in relation to where the user is looking through the HoloLens, but too many sounds can be confusing, and too few can leave the user wondering what to do next.

The snippet below adds two sounds, one for an impact of an object and one for an object (such as your sphere) rolling.

The OnCollisionEnter, OnCollisionStay and OnCollisionExit events determine when to start the audio clip, whether to continue the audio clip and when to stop the audio clip. This is just one way of adding sound that is triggered upon a collision event, but you can also add ambient audio, such as music that plays throughout the experience or voice clips triggered by progress events. Adding audio makes your experience more believable and immerses the user fully.

Code snippets are from https://developer.microsoft.com/en-us/windows/holographic/holograms_101e

If you are a software developer producing traditional software for desktop, mobile and corporate environments, creating apps and experiences for HoloLens is a step into the unknown. The way you need to think about experiences in a 3D space will challenge your traditional perception of app development.

The good thing about building apps for HoloLens is that you don’t have to part with US$3,000 to buy a HoloLens to get started. All the tooling is free and you can use the emulator for almost all the scenarios you want to develop, testing on a real device later.

HoloLens runs Windows 10 so your existing UWP apps will work and you can choose to extend them to give a full holographic experience when run on the HoloLens.

The future for digital realities is bright and getting a grasp on it early will allow you to take full advantage of the platform once consumers come on board.

I woud love to hear your questions and comments below.