In your dealings with PHP, you may come to consider writing a PHP extension yourself. There are several reasons I can think of that motivate me to do so:

When it comes to choosing a tool to build PHP extensions, we see two different approaches:

For me, the main drive to select the second approach is simple: I started my programming hobby with C/C++, so I still feel more comfortable writing those lower level modules in C/C++. PHP-CPP’s official site gives a few other reasons to do so.

PHP-CPP is evolving rapidly. At the time of this article’s writing, it is in version 0.9.1 (with 0.9.0 released about 2 days before). According to its documentation, “this is a feature-freeze release that prepares for the upcoming v1.0 version”, so we are confident we’ll see its 1.0 major release very soon.

It is thus recommended, at least during this interim period, to use git to clone the repository and get the latest update later via git pull.

PHP-CPP is written in C++11. Thus, the older version of g++ installed in my Ubuntu 12.04 LTS does not support it. We need to upgrade our g++ compiler to version 4.8.x above. There is an article detailing the steps to do the upgrading. Please follow the instructions listed there.

Also, PHP-CPP compilation will use the php.h header file. This file is normally missing in an Ubuntu box, unless php-dev was installed. We can install PHP5 related development files by issuing this command:

After upgrading g++ and installing the necessary header files, we can issue the following command to compile and install the PHP-CPP library file (libphpcpp.so):

The installation of PHP-CPP lib is now complete. It is quite straightforward and we can now move on to the programming part.

Before we do that, we’ll discuss a few important concepts and terminologies used in PHP-CPP. The full documentation can be found on its official site, and everyone is encouraged to read through it BEFORE doing any real programming.

These are all the changes I have made. The rest of the Makefile can be kept as it is.

I renamed this file to skeleton.ini and changed the only line in that file like this:

In the empty project provided by PHP-CPP, this file contains only one function: get_module(), which is excerpted below:

For now, let’s just change this line to match the extension name we intend to create:

get_module() is called by PHP when the latter tries to load a required library. It is considered the entry point for a lib. It is declared using the extern "C" modifier to comply with PHP lib requirement for the get_module() function. It also uses a macro PHPCPP_EXPORT which makes sure that get_module() is publicly exported, and thus callable by PHP.

So far, we have made some changes to the empty project to suit our needs. We can now compile and install this project and install the extension:

Next, we need to copy the required files into the appropriate folders:

We just need to make sure that the skeleton.so lib is copied to the right location of PHP extensions (in my Ubuntu setup, it should be /usr/lib/php5/20121212 as shown above).

We can then verify the extension is loaded in CLI by php -i | grep skeleton, and the terminal shall display something like this: 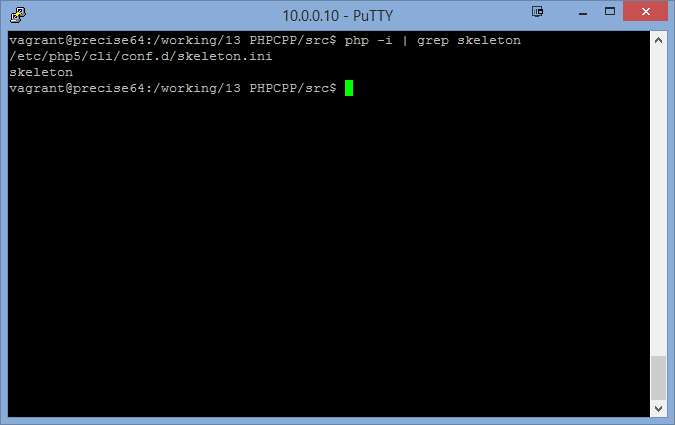 (Recall that the skeleton.ini is the file we modified above, which contains the extension=skeleton.so line.)

We have so far compiled and installed our first PHP extension using PHP-CPP. Of course, this extension does nothing yet. We will now create our first few functions to further understand the process of building PHP extensions.

The first function we create will be a slightly modified version of “Hello, World”. Let’s see the full code of main.cpp first:

According to the PHP-CPP documentation on “Register native functions“, it supports four types of function signatures to be called from PHP:

In this case, I am using the second signature and the parameters are passed by value in an array form (PHP feature).

However, in helloWorld, we have specifically used C++ type std::string to grab the first parameter. We have also used C++ std lib to output a welcoming message.

In get_module() function, after declaring the extension variable, we add the function we would like to export (helloWorld()) and assign a name visible to the PHP script (helloWorld).

Now let’s compile and install the extension. If everything goes smoothly, the new skeleton.so file will be copied to the extension directory.

We can write a simple script to test the function just created:

Please take some time to look at the output: 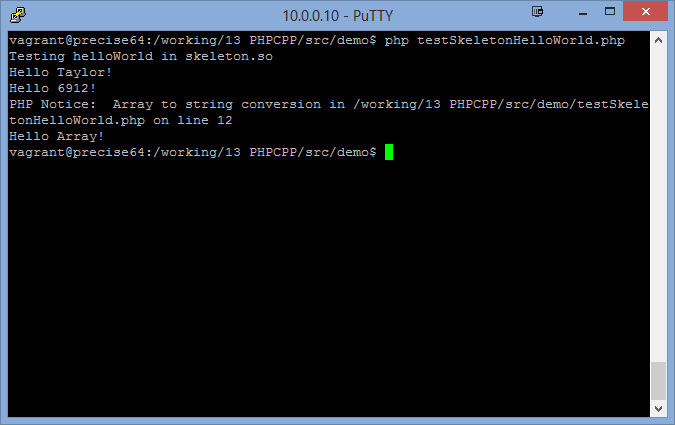 We will come back to what we have observed here later.

Next, we will see another function which passes parameters by reference, a swap() function. In this function, we will also try to specify the number of parameters and their type.

In main.cpp, we add one more function swap():

And also export the function by specifying the number of parameters and their type:

We explicitly say that:

Let’s compile and install the updated extension again and write some code snippets to see how this new functions works:

swap($a) will fail. This is expected and unexpected. The expected part is that we need two parameters and only one is given. But, shouldn’t that error be captured by PHP when calling the function swap and prompting us something like Not enough parameters?

The first call (swap($a, $b)) shows the expected result: 20|10. The function swaps the two numbers passed in.

The second call is somehow unexpected: we have told PHP that we are to swap two numbers! But it just ignores the fact that the 2nd parameter passed is a string and does the swapping anyway!

Well, in a way, it is still expected. PHP does not really distinguish a number type and a string type. This behavior complies to the PHP standard. Also due to this behavior, we didn’t and can’t use C++ internal types for the temporary variable used in the function (temp) but used Php::Value as the variable type.

The third call will work. The first var_dump will show the DateTime object and the second will show the integer. This is somehow very much unexpected (at least to me). After all, an object is quite different from a number/string. But after considering that this “swap” behavior is also doable in PHP, it fits in with PHP’s oddities.

So, does it mean the “type” specification won’t have any impact? Not really. To further elaborate this, we create a third function:

The above code segment illustrates one important aspect on type restriction: scalar types declaration is not really implemented. PHP and thus PHP-CPP only enforce object-type declaration. Also, the number of parameters is not really enforced on the PHP side.

In this article, we illustrated the steps to prepare PHP-CPP to work for our PHP environment. We also discussed some basic steps to create a PHP extension using PHP-CPP (and C++ semantics).

In our next article, we will further elaborate a few key features in PHP-CPP and provide a real-world use case demonstrating the usage of C++ class and namespace implementations using PHP-CPP.

Getting Started with PHP UnderscoreLukas White