Some people say that legacy code is any code written without tests, and I am one of those people. But I’m also a front-end developer, which means that testing my code often requires a browser. This makes testing slightly more difficult, or at least I thought it was. In reality, it’s actually quite simple and in this article I’ll show you what it takes to get started!

In order to test our code, we’re going to use GitHub and Travis CI. GitHub will host our code, and Travis CI will serve as the testing platform. This is all completely free for public repositories, and there’s plenty of documentation to help you in using both these products. The first thing to do is to create a repository on GitHub. For the sake of this tutorial, I’ve created a repository that you can find here.

The next step is to visit the page at https://travis-ci.org/ and sign in with GitHub. Once done, you’ll need to add a repository for Travis to run tests against as shown in the image below. 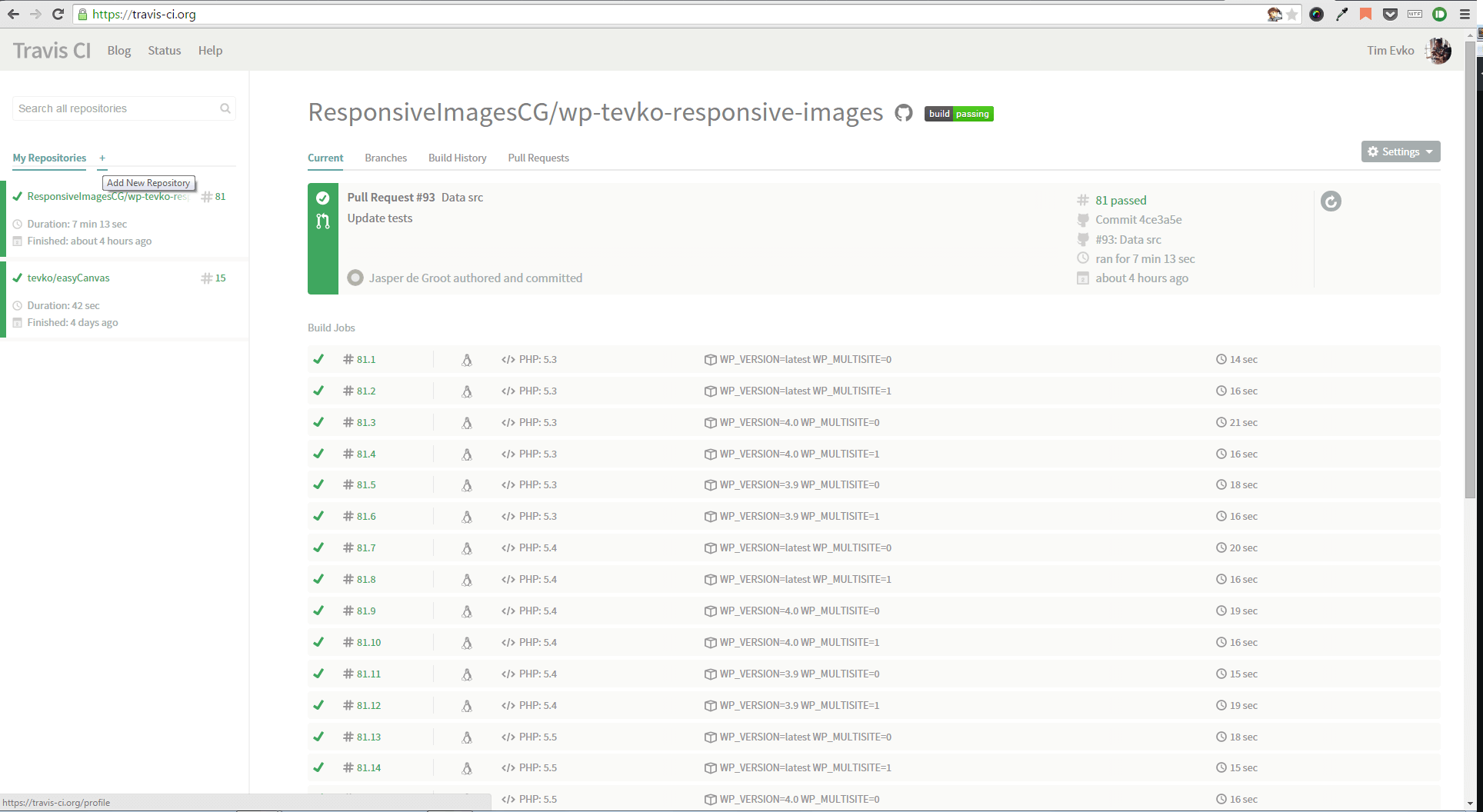 Clicking on the “plus” icon will take us to a console where we can sync with our GitHub account and choose the repository. The dashboard for our repository will be blank since we haven’t set up any test. Let’s now move to the next stage.

Just like Mitochondria is the powerhouse of the cell, Node.js is going to be the powerhouse of our sweet testing setup. If you haven’t installed Node.js, visit its website and install it. Once done, clone the repository you created in the previous section so that you have all the files in your local machine. At this point, we’re ready to install Karma!

Karma is a testing framework originally created by the AngularJS team. We’re going to use it to help us run Jasmine on Travis CI in Firefox. I know that sounded overwhelming, but don’t worry! Soon we’ll have some really cool tests running and it’ll all be worth it.

If you don’t have already a package.json file and the node_module folder in your repository, run npm init and complete the setup. The previous command will help you in creating the package.json file. Next, run the following command:

We’re also going to install a few necessary Karma plugins: karma-jasmine and karma-firefox-launcher. So go ahead and run:

Now that we have all of the necessary plugins installed, we want to tell Karma about our project so that it can run tests against it. Run the command:

This will take you through a guided setup, asking you questions about your project and its environment. The following screenshot will show all of the required questions and answers for a simple Karma setup: We haven’t yet created our test directory. So, when asked about the location of our source and test files, we’ll be warned that tests/*.js doesn’t exist. As for dist/*.js, that’s the file that I plan to run my tests against, which may be different for your project.

That’s it! Karma is good to go!

So far, Travis has no idea what to do with our repository. Let’s fix this. We’ll need to create a .travis.yml file with the following code:

This tells Travis that we’re using Node.js to test JavaScript and use Firefox as a browser. Besides, we specify that before it begins testing, it should run npm install to grab all of the necessary plugins.

Up to this point, we have Karma and Travis properly configured. So, we’re ready to write some tests for our JavaScript code. For my sample repository, I have a file called coolLibrary.js that adds a teal square to the body element and gives it a data attribute. You can see it in action on CodePen.

In order to test this code, I’ve created the tests directory mentioned in the my.conf.js file, and from there I’ll add the jasmine test files. My first test will be a simple check to ensure that there is a div on the page with a class of box. Jasmine makes this very simple with an easy-to-understand function syntax. Here’s what the first test (checkIfDivExists.js) looks like:

This creates a Suite that searches for an element with the class of box, and expects its node name to be DIV. The syntax is pretty straightforward.

In addition to the previous test, I’ll also create two more tests that you can find in the GitHub repository for this project and that are copied below for your commodity:

With the tests for our code in place, our final step is to commit our code. This will add all of our testing logic and trigger a build on Travis. Don’t forget to have a .gitignore file that ensures your node_modules folder isn’t pushed into the repository! Once you commit and push your code, Travis will automatically detect the changes and run your tests. The process may take a few minutes, but you’ll be alerted via email as soon as the build is complete. You can create as many tests as you need, and GitHub will make sure to check incoming pull requests against these tests as well.

In this tutorial we learned how to set up a simple testing environment for our JavaScript code using Karma, Jasmine, and Travis. Feel free to see the final result at https://github.com/sitepoint-editors/FEJStesting and sound off with any questions or concerns in the comments! You can view the latest test on Travis at https://travis-ci.org/tevko/FEJStesting