This article was peer reviewed by Moritz Kröger, Bruno Mota and Vildan Softic. Thanks to all of SitePoint’s peer reviewers for making SitePoint content the best it can be!

It is easy to see that the “everything is a stream” approach can be applied directly to our programming problems. After all, a CPU is nothing more than a device which processes a stream of information consisting of instructions and data. Our goal is to observe that stream and transform it in case of particular data.

The principles of reactive programming are not completely new to JavaScript. We already have things like property binding, the EventEmitter pattern, or Node.js streams. Sometimes the elegance of these methods comes with decreased performance, overly complicated abstractions, or problems with debugging. Usually, these drawbacks are minimal compared to the advantages of the new abstraction layer. Our minimal examples will, of course, not reflect the usual application, but be as short and concise as possible.

Without further ado, let’s get our hands dirty by playing with The Reactive Extensions for JavaScript (RxJS) library. RxJS uses chaining a lot, which is a popular technique also used in other libraries such as jQuery. A guide to method chaining (in the context of Ruby) is available on SitePoint.

Before we dive into RxJS we should list some examples to work with later. This will also conclude the introduction to reactive programming and streams in general.

In general, we can distinguish two kinds of streams: internal and external. While the former can be considered artificial and within our control, the latter come from sources beyond our control. External streams may be triggered (directly or indirectly) from our code.

Usually, streams don’t wait for us. They happen whether we can handle them or not. For instance if we want to observe cars on a road, we won’t be able to restart the stream of cars. The stream happens independent of if we observe it or not. In Rx terminology we call this a hot observable. Rx also introduces cold observables, which behave more like standard iterators, such that the information from the stream consists of all items for each observer.

The following images illustrates some external kinds of streams. We see that (formerly started) requests and generally set up web hooks are mentioned, as well as UI events such as mouse or keyboard interactions. Finally, we may also receive data from devices, for example GPS sensors, an accelerometer, or other sensors. 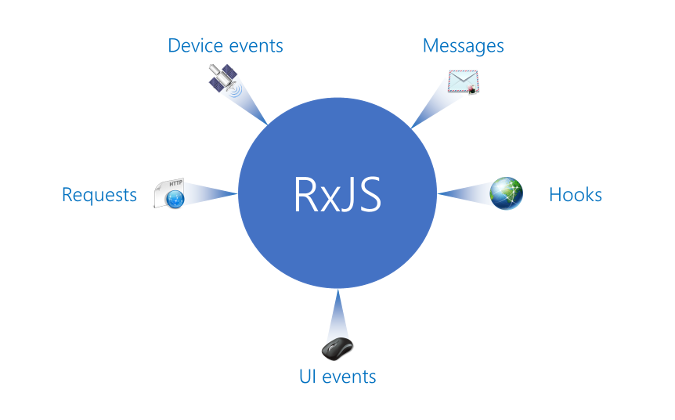 The image also contained one stream noted as Messages. Messages can appear in several forms. One of the most simple forms is a communication between our website and some other website. Other examples include communication with WebSockets or web workers. Let’s see some example code for the latter.

The code of the worker is presented below. The code tries to find the prime numbers from 2 to 1010. Once a number is found the result is reported.

Classically, the web worker (assumed to be in the file prime.js) is included as follows. For brevity we skip checks for web worker support and legality of the returned result.

More details on web workers and multi-threading with JavaScript can be found in the article Parallel JavaScript with Parallel.js.

Considering the example above, we know that prime numbers follow an asymptotic distribution among the positive integers. For x to ∞ we obtain a distribution of x / log(x). This means that we will see more numbers at the beginning. Here, the checks are also much cheaper (i.e., we receive much more prime numbers per unit of time in the beginning than later on.)

This can be illustrated with a simple time axis and blobs for results:

A non-related but similar example can be given by looking at a user’s input to a search box. Initially, the user may be enthusiastic to enter something to search for; however, the more specific his request gets the greater the time difference between the key strokes becomes. Providing the ability to show live results is definitely desirable, to help the user in narrowing his request. However, what we do not want is to perform a request for every key stroke, especially since the first ones will be performed very fast and without thinking or the need to specialize.

In both scenarios the answer is to aggregate previous events over a given time interval. A difference between the two described scenarios is that the prime numbers should always be shown after the given time interval (i.e., some of the prime numbers are just potentially delayed in presentation). In contrast, the search query would only trigger a new request if no key stroke happened during the specified interval. Therefore, the timer is reset once a key stroke has been detected.

RxJS to the Rescue

Rx is a library for composing asynchronous and event-based programs using observable collections. It is well known for its declarative syntax and composability while introducing an easy time handling and error model. Thinking of our former examples we are especially interested in the time handling. Nevertheless, we will see there is much more in RxJS to benefit from.

The basic building blocks of RxJS are observables (producers) and observers (consumers). We already mentioned the two types of observables:

Cold observables usually refer to arrays or single values that have been converted to be used within RxJS. For instance, the following code creates a cold observable that only yields a single value before completing:

We may also return a function containing cleanup logic from the observable creation function.

Subscribing to the observable is independent of the kind of observable. For both types we can provide three functions that fulfill the basic requirement of the notification grammar consisting of onNext, onError, and onCompleted. The onNext callback is mandatory.

As a best practice we should terminate the subscription by using the dispose method. This will perform any required cleanup steps. Otherwise, it might be possible to prevent garbage collection from cleaning up unused resources.

Without subscribe the observable contained in the variable observable is just a cold observable. Nevertheless, it is also possible to convert it to a hot sequence (i.e., we perform a pseudo subscription) using the publish method.

Some of the helpers contained in RxJS only deal with conversion of existing data structures. In JavaScript we may distinguish between three of them:

The latter is new with ES6 and may be replaced with arrays (even though that’s a bad substitute and should be treated as a single value) for ES5 or older. 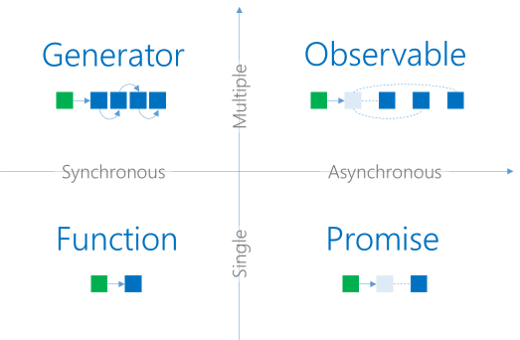 While iterators need to be pulled, the values of observables are pushed. An example would be an event stream, where we cannot force the next event to happen. We can only wait to be notified by the event loop.

Most of the helpers creating or dealing with observables also accept a scheduler, which controls when a subscription starts and when notifications are published. We won’t go into details here as the default scheduler works just fine for most practical purposes.

Many operators in RxJS introduce concurrency, such as throttle, interval, or delay. We will now take another look at the previous examples, where these helpers become essential.

First, let’s take a look at our prime number generator. We wanted to aggregate the results over a given time, such that the UI (especially in the beginning) doesn’t have to deal with too many updates.

Here, we actually might want to use the buffer function of RxJS in conjunction with the previously mentioned interval helper.

The result should be represented by the following diagram. The green blobs arise after a specified time interval (given by the time used to construct interval). A buffer will aggregate all the seen blue blobs during such an interval.

Furthermore, we could also introduce map, which helps us to transform data. For instance, we may want to transform the received event arguments to obtain the transmitted data as a number.

The fromEvent function constructs an observable from any object using the standard event emitter pattern. The buffer would also return arrays with zero-length, which is why we introduce the where function to reduce the stream to non-empty arrays. Finally, in this example we are only interested in the number of generated prime numbers. Therefore we map the buffer to obtain its length.

We want to achieve a behavior that is reflected by the following diagram. Hence, we’re going to use the debounce mechanism.

We want to throw away all the previous results and only obtain the last one before the time window depleted. Assuming that the input field has the id query we could use the following code:

In this code the window is set to 300ms. Also we restrict queries for values with at least 3 characters, which are distinct from previous queries. This eliminates unnecessary requests for inputs that have just been corrected by typing something and erasing it.

There are two crucial parts in this whole expression. One is the transformation of the query text to a request using searchFor, the other one is the switch() function. The latter takes any function which returns nested observables and produces values only from the most recent observable sequence.

The function to create the requests could be defined as follows:

Note the nested observable (which might result in undefined for invalid requests) which is why we’re chaining switch() and where().

RxJS makes reactive programming in JavaScript a joyful reality. As an alternative there is also Bacon.js, which works similarly. Nevertheless, one of the best things about RxJS is Rx itself, which is available on many platforms. This makes the transition to other languages, platforms, or systems quite easy. It also unifies some of the concepts of reactive programming in a set of methods that are concise and composable. Furthermore, several very useful extensions exist, such as RxJS-DOM, which simplifies interaction with the DOM.

Where do you see RxJS shine?