In this article, we’ll look at two methodologies for naming things in CSS. Both methods were created to improve the development process for large sites and large teams; however, they work just as well for teams of one. Whether you choose one or the other, neither, or a mix of both is up to you. The point of introducing them is to help you to think through approaches for writing your own CSS.

BEM, or Block-Element-Modifier, is a methodology, a naming system, and a suite of related tools. Created at Yandex, BEM was designed for rapid development by sizable development teams. In this section, we’ll focus on the concept and the naming system.

BEM methodology encourages designers and developers to think of a website as a collection of reusable component blocks that can be mixed and matched to create interfaces. A block is simply a section of a document, such as a header, footer, or sidebar, illustrated below. Perhaps confusingly, “block” here refers to the segments of HTML that make up a page or application. 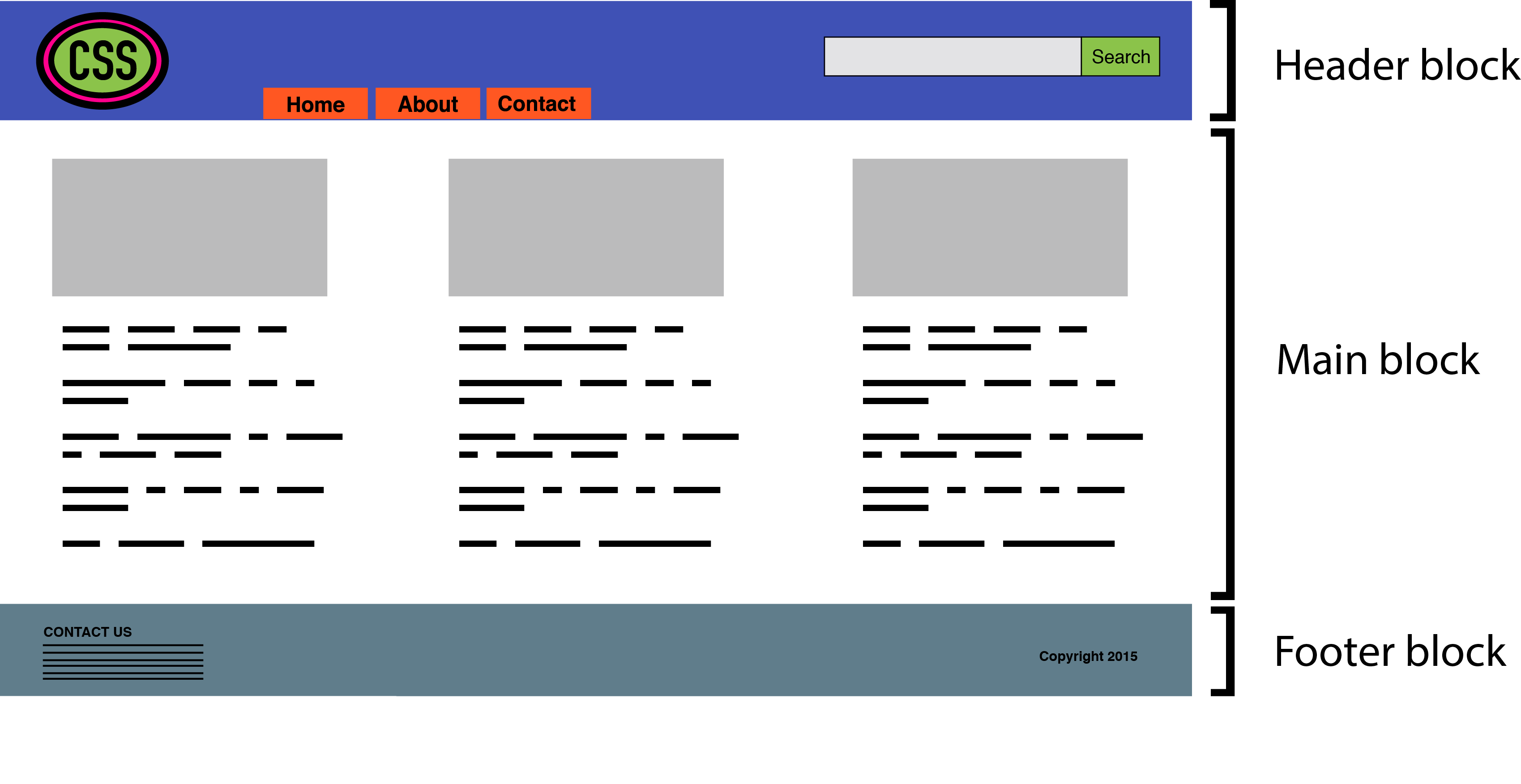 Blocks can contain other blocks. For example, a header block might also contain logo, navigation, and search form blocks, as seen in below. A footer block might contain a site map block.

More granular than a block is an element. As the BEM documentation explains:

An element is a part of a block that performs a certain function. Elements are context-dependent: they only make sense in the context of the block they belong to.

A search form block, for example, contains a text input element and a submit button element, as evident in the image below. (To clarify, we’re using “element” in the design element sense rather than the HTML element sense.)

Together, blocks and elements form the basis of the BEM naming convention. According to the rules of BEM:

Here’s what BEM looks like using a search form example:

A variation of this form with a dark background might use the following markup:

In both our markup and CSS, search--inverse and search__label--inverse are additional class names. They’re not replacements for search and search__label. Class names are the only type of selector used in a BEM system. Child and descendant selectors may be used, but descendants should also be class names. Element and ID selectors are verboten. Enforcing block and element name uniqueness also prevents naming collisions, which can become a problem among teams.

There are several advantages to this approach:

There’s a lot more to BEM than can comfortably fit in a section of a chapter. The BEM site describes this methodology in much greater detail, and also features tools and tutorials to get you started. To learn more about the naming convention aspect of BEM, another fantastic resource is Get BEM.

If BEM is the industry darling, Atomic CSS is its rebellious maverick. Named and explained by Thierry Koblentz of Yahoo in his 2013 piece, “Challenging CSS Best Practices,” Atomic CSS uses a tight library of class names. These class names are often abbreviated and divorced from the content they affect. In an Atomic CSS system, you can tell what the class name does—but there’s no relationship between class names (at least, not those used in the stylesheet) and content types.

Let’s illustrate with an example. Below is a set of rules in what we might call a conventional CSS architecture. These rulesets use class names that describe the content to which they apply—a global message box, and styles for “success,” “warning,” and “error” message boxes:

To create an error message box, we’d need to add both the msg and msg-error class names to the element’s class attribute:

Let’s contrast this with an atomic system, where each declaration becomes its own class:

Our markup is also more verbose. But what happens when we create a warning message component?

Hey now! Here we’ve reused four rulesets and avoided adding any more rules to our stylesheet. In a robust atomic CSS architecture, adding a new HTML component such as an article sidebar won’t require adding more CSS (though, in reality, it might require adding a bit more).

Atomic CSS is a bit like using utility classes in your CSS, but taken to the extreme. Specifically, it:

However, Atomic CSS is not without controversy.

The Case Against Atomic CSS

Atomic CSS runs counter to just about everything we’ve been taught on writing CSS. It feels almost as wrong as sticking style attributes everywhere. Indeed, one of the major criticisms of the Atomic CSS methodology is that it blurs the line between content and presentation. If class="fl m-1x" floats an element to the left and adds a ten-pixel margin, what do we do when we no longer want that element to float left?

One answer, of course, is to remove the fl class from our element. But now we’re changing HTML. The whole reason behind using CSS is so that markup is unaffected by presentation and vice versa. (We can also solve this problem by removing the .fl {float: left;} rule from our stylesheet, although that would affect every element with a class name of fl.) Still, updating the HTML may be a small price to pay for trimmer CSS.

In Koblentz’s original post, he used class names such as .M-10 for margin: 10px and .P-10 for padding: 10px. The problem with such a naming convention should be obvious. Changing to a margin of five or 20 pixels means we’d need to update our CSS and our HTML, or risk having class names that fail to accurately describe their effect.

Using class names such as p-1x, as done in this section, resolves that issue. The 1x part of the class name indicates a ratio rather than a defined number of pixels. If the base padding is five pixels (that is, .p-1x { padding: 5px; }), then .p-2x would set ten pixels of padding. Yes, that’s less descriptive of what the class name does, but it also means that we can change our CSS without updating our HTML, and without creating a misleading class name.

An atomic CSS architecture doesn’t prevent us from using class names that describe the content in our markup. You can still add .button-close or .accordion-trigger to your code. Such class names are actually preferable for JavaScript and DOM manipulation.

BEM works best when you have a large number of developers building CSS and HTML modules in parallel. It helps to prevent the kind of mistakes and bugs that are created by sizable teams. It scales well, in part, because the naming convention is descriptive and predictable. BEM isn’t only for large teams, but it works really well for large teams.

Atomic CSS works better when there’s a small team or a single engineer responsible for developing a set of CSS rules, with full HTML components built by a larger team. With Atomic CSS, developers can just look at a style guide—or the CSS source—to determine which set of class names they’ll need for a particular module.

Know when to go your own way

In practice, your CSS may include a mix of approaches. You may have class names that describe content or components in addition to utility class names that affect layout. If you don’t have full control over the markup, as with a CMS, then neither of these approaches may be useful. You may even need to use long and specific selectors to achieve what you want. 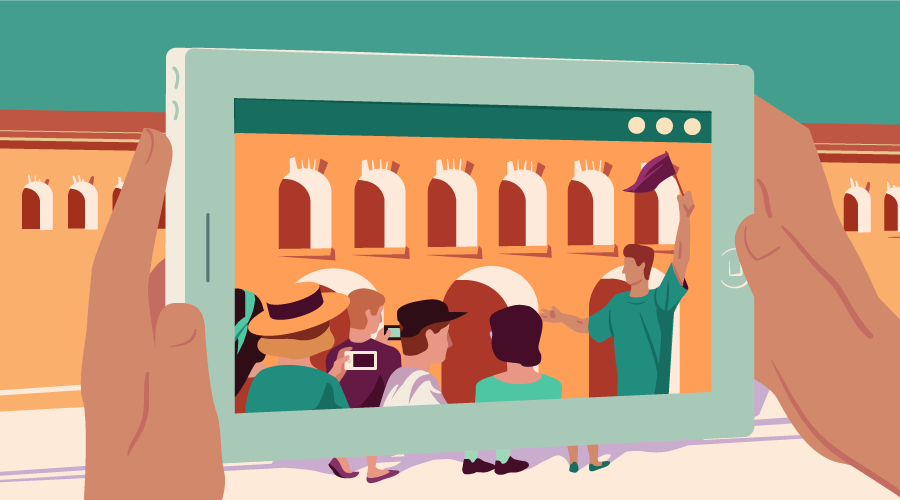 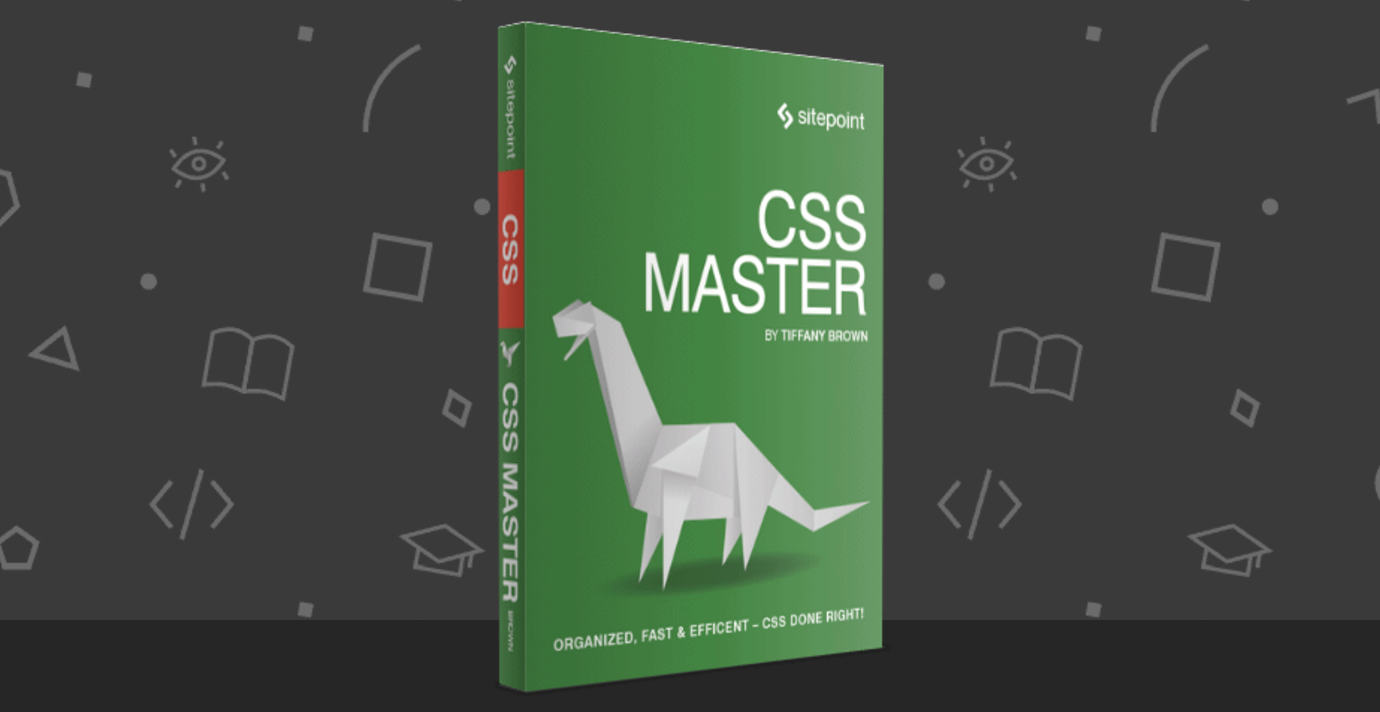