This series of posts will show you how to create a simple Windows 8 game, using HTML5, JavaScript, WinJS, and CreateJS.

In this post, we’ll respond to user input and make things a bit more lively by adding sound.

Of course there are many ways we could have shot aiming work – random, time-based, precision-based (e.g. “click… NOW!”), but in this case we’ll let the user draw a line indicating both direction and speed.

First, let’s add new variables near the top of default.js:

Windows 8 supports several ways to draw – mouse, touch, pen – and our game needs to be flexible enough to support whichever the user has.  Fortunately, the MSPointer system combines support for all of these into one.  We’ll use MSPointerDown/Up to begin and end aiming, plus MSPointerMove to provide feedback as the user adjusts the aim.

By the way, there’s also great support via MSGesture for detecting gestures such as tap, double-tap, etc.  A good example for handling input and gestures is the “BallInEight” sample on MSDN.

These events are used by pointing to listener functions, called when they fire.  Let’s take care of that now, adding near the top of the initialize() function:

And now for the functions themselves: add where you like, but I placed between update() and fireShot(): 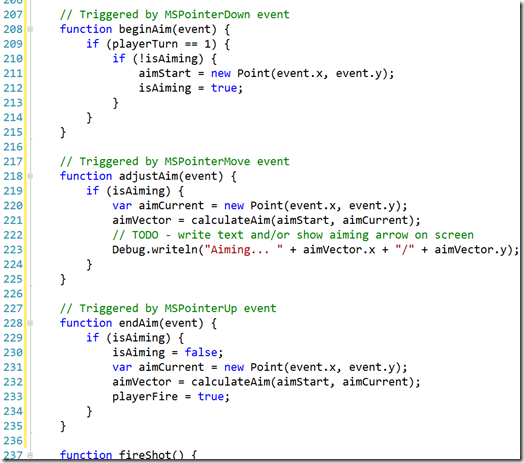 Note an exercise is left here.  For simplicity, I omitted showing text with aim % and/or drawing an aiming arrow during the adjustAim() function.  Go ahead and try adding that – from earlier parts, we’re already using the very same techniques you’ll need.

And a function to help us calculate the aim:

Again, simplicity rules the day and this is only for player 1, but here’s what’s happening:

We earlier added some temporary code to update() to have player 1 always fire randomly.  Now we can replace that to use the new aimVector:

Go ahead and run the game… 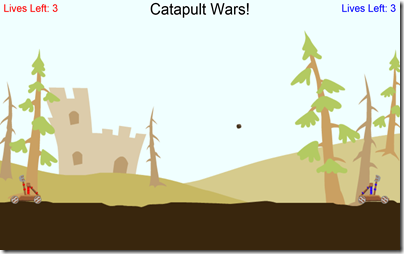 Now you can use the mouse, pen, or touch to control the shot!

“I must be hearing things!” – Adding Sound

Our job as a game dev isn’t done until we have some sound.  We’ve already added the sound files back in Part 2 so let’s take the next step by loading them.

First, a few variables in default.js to keep things tidy:

Recall from Part 2 that we’ve already wired up PreloadJS to ensure our resources are ready when the game starts?  We can use the same approach with sounds, so let’s add them to the manifest: 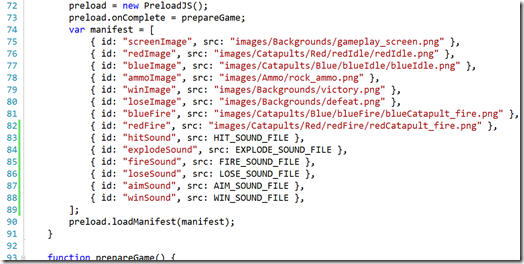 To use these files, we’ll create instances of HTML audio elements.  Long story short, if you simply create one audio instance per sound file, you’ll probably run into clipping as one sound fails to play before the prior play of that instance completes.  There are several approaches for dealing with this (for example, see “HTML5 Audio and JavaScript Control”), but we’ll do the simple & inefficient thing of using one instance each time we play a sound.

Note, we will not be using SoundJS (another part of CreateJS) in this example, but of course you’re welcome to take it for a spin!

That’s it!  Now we just call it, specifying the constant pointing to the right file.  We’ll do this in several places.

First, add a call to fireShot():

As the comment mentions, you could use the “Hit” sound instead of “Explode” if you’d like to have it take multiple hits to destroy a catapult.

And finally, play end win or lose sound in endGame(): 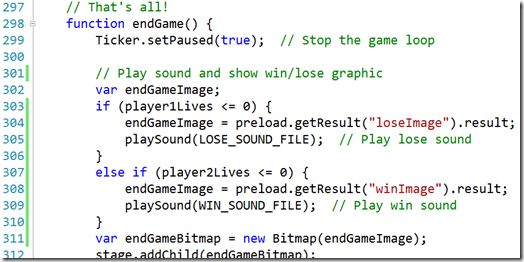 Go ahead and give it a run to try things out.

Congratulations!  You’ve made a game!

We’ve covered a lot of ground in these posts, but like anything, there’s plenty of other things to try.  Why not take a stab at some of them?

Enjoy!  Looking forward to hearing about the awesome new things you add!