Google wants people to have a good web experience, so it ranks fast sites higher in search results. Of course, that’s a gross simplification but, presuming you’re comparing two sites with similar content and audiences, the faster one should appear higher in results. But how Google measures this has always been a bit of a guessing game, so it introduced Core Web Vitals to provide site owners and developers with some much-needed clarity.

Unfortunately, “performance” is a catch-all term for dozens of metrics…

Different tools return different sets of results and it can be difficult to know where to start.

Google’s Web Vitals initiative aims to simplify performance assessment and help you concentrate on the improvements which matter most. The Core Web Vitals are critical performance metrics which reflect real-world user experiences. Some are reported by the Lighthouse panel in Chrome DevTools, PageSpeed Insights, and the Google Search Console.

The web-vitals JavaScript library can help measure more realistic metrics from real users accessing your site. Results can be posted to Google Analytics or other endpoints for further analysis.

Google advises using the 75th percentile, i.e. record multiple results for the same metric, sort them into order from best to worst, then analyse the figure at the three-quarters point. Three out of four site visitors will therefore experience that level of performance.

Historic metrics such as page load and DOMContentLoaded have struggled in this respect because they are not always indicative of the user experience. For example, a splash screen could appear almost instantly but usable content loaded by further Ajax requests could take much longer to appear.

The element types considered in LCP are:

The largest element is determined as the content loads and the size is calculated to be its visible dimensions in the browser viewport.

LCP can be affected by:

LCP improvements may be possible by:

FID measures responsiveness — how quickly a page responds to a user’s action.

This metric records the time from when a user interacts with the page (clicks, taps, key presses, etc.) to the time the browser begins processing that event handler. A delay of less than 100ms is considered good and anything above 300ms is considered poor.

FID can only be accurately measured when an application is served to a real user. Additionally, it only measures the delay in event processing — not the time taken to run a handler or update the UI.

Google and various tools therefore use Total Blocking Time (TBT) as an alternative metric which can be calculated without real user input. TBT measures the total time between:

CLS measures visual stability — the unexpected movement of content when viewing a page.

CLS assesses those annoying situations when content moves without warning — typically when the DOM changes after an advertisement or image above your current scroll position completes loading. The problem is especially pronounced on mobile devices and can cause you to lose your place or tap the wrong link.

CLS is calculated by multiplying:

Consider the following example which loads an advertisement shortly after the logo, menu, and hero image have been rendered: 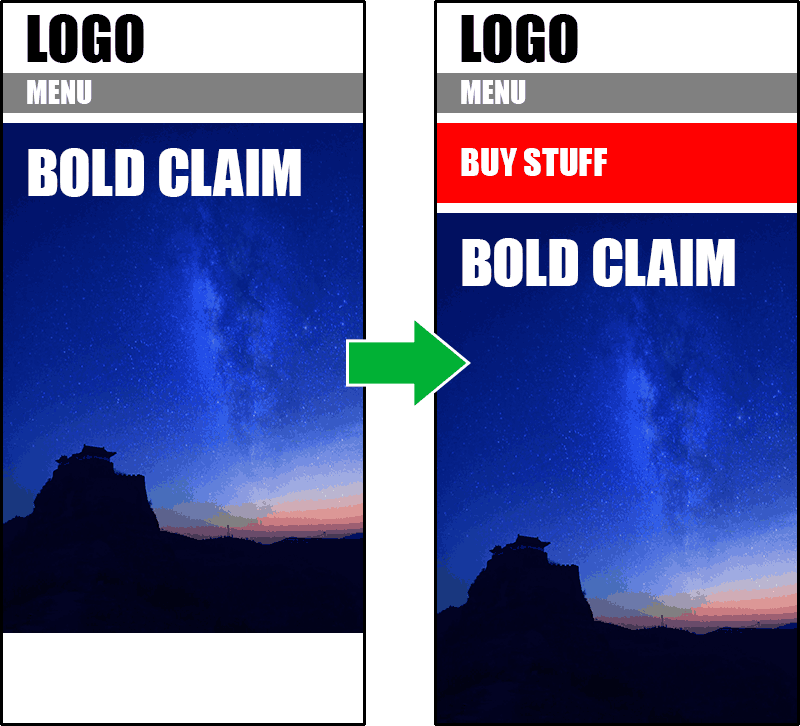 The logo and menu do not move — they are stable elements. The advertisement is added to the DOM and it’s starting position does not change so it is also stable. However, the hero image will move:

A CLS score under 0.1 is considered good and anything above 0.25 is considered poor. In this case, the CLS is just within the accepted range because, although a large area is affected, it is moved a relatively small distance. A larger advertisement would require further attention, though.

The CLS algorithm does not record the layout shift for 500ms after any user interaction which could trigger a UI change or viewport resize. Therefore, your page will not be penalized for interface updates, transitions, and animations which are necessary for operation, e.g. opening a full-screen menu from a hamburger icon.

The Rendering panel in Chrome DevTools (menu > More tools > Rendering) provides a Layout Shift Regions option. Check the box and refresh the page — layout shifts are highlighted in blue. You can also modify the network speed in the Network panel to slow down loading.

Core Web Vitals will evolve over time but assessing LCP, FID, and CLS metrics can help identify the most critical issues. Tackle the quick and easy problems first — they often have the biggest return on investment: