The previous post in this series was called Theory of a Cloud Based Photo Sharing App using Windows Phone and Azure. We went through the architecture for a simple image sharing application. Steps 1 to 5 in this process involve taking a photo with the camera and uploading it to blob storage. To follow along with this article you’ll need to install both the Windows Phone SDK and the Windows Azure SDK for Visual Studio.

Note: It’s recommended that you run Visual Studio “As Administrator” for the duration of this tutorial. Whilst it is not required for the development of the phone application, it is required for working with the Windows Azure development environment. Also note that if Visual Studio is running “As Administrator” it will also run the Windows Phone Emulator in this mode – if you already have the emulator running, remember to close it before attempting to run your phone application from Visual Studio running in this mode.

Let’s start with the phone part. We’ll start with a new Windows Phone project and take an image with the camera. Windows Phone has a concept called Tasks which are designed to expose common features of the platform using a standard, consistent look and feel. They’re broken into two categories: Launchers, which simply launch specific functionality such as the maps or search applications, and Choosers, which are designed to return data to the application. In this case we’re going to use the CameraCaptureTask to prompt the user to take a photo with the camera, which is then returned to the application. Note that in Windows Phone 7.5 (Mango) you do have direct access to the camera feed if you want to provide your own custom user experience for taking a photo or for capturing video.

We’ll keep the layout for the MainPage of the application relatively simple, consisting of an Image control, in which the photo captured will be displayed, and two Buttons, the first to initiate the photo capture and the second to upload the captured image to the cloud.

In the code for the MainPage we need to create an instance of the CameraCaptureTask, assign an event handler for the Completed event, and then call the Show method on the task when the user clicks the Capture button.

When the CameraCaptureTask returns we’re taking the returned stream (e.ChosenPhoto) and decoding it into an image that is both saved to IsolatedStorage (local storage for the application) and displayed in the image control, CaptureImage. If you run this code in the emulator you should be able to use the camera simulation to return a default image that will be displayed within your application, as in the right image of Figure 1.
  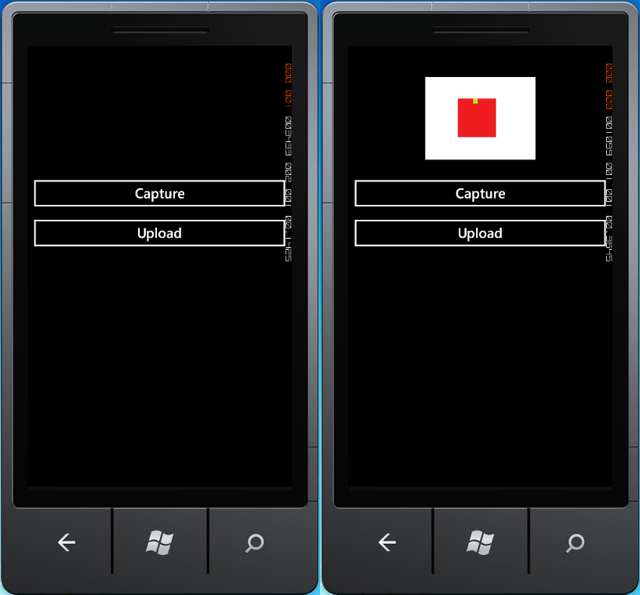 The next step is to create our cloud project, which can be added to the same solution that contains your phone application. Right-click on the Solution node in Solution Explorer and select Add > New Project, and in the Add New Project dialog select the Windows Azure Project template from within the Cloud node. Give the new project a new name, for example “ImageSharingCloud”, and click OK to proceed. You’ll then be prompted to add one or more Windows Azure Projects based on a set of existing templates. In this case we’re going to create a WCF Service Web Role, called ImageServices, and a Worker Role, called ImageWorker. Add these by selecting the role and clicking the right arrow (see Figure 2); you can then rename them so that they’re easier to identify within your solution.
  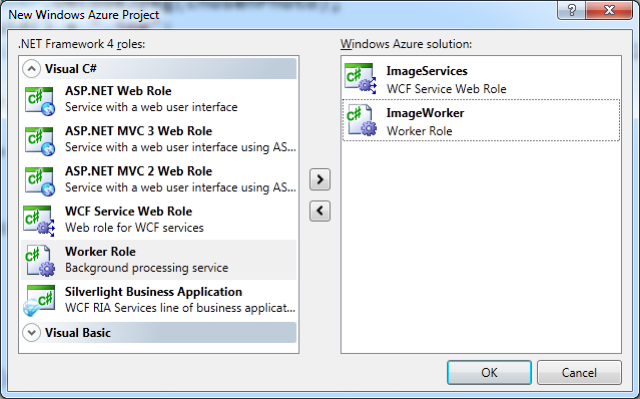 In order to upload the photo from our Windows Phone application directly into Windows Azure Blob Storage we need to know one of the two access keys issued via the Windows Azure Management Console for the storage account you want to upload to. These keys are designed to be use within web sites or services that are located on a server, not for inclusion within client applications. Silverlight, whether it is used to build desktop applications or applications for Windows Phone, is a client technology and you should not include access keys within these applications.

We’re going to work with the newly created ImageServices project to expose a service which can be called by our Windows Phone application in order to return an SAS. Firstly, you need to tell the ImageServices project which storage account you want to use. Double-click the Properties node for the ImageServices project in Solution Explorer to open the Properties dialog. On the Settings tab you need to create a new entry, DataConnectionString, with the Type set to Connection String. Clicking the ellipses button will open the Storage Account Connection String dialog, shown in Figure 3. Here we’re going to use the storage emulator that comes with the Windows Azure SDK. However, when you eventually go to publish your application you will need to change this to use the account name and key of your storage account.
  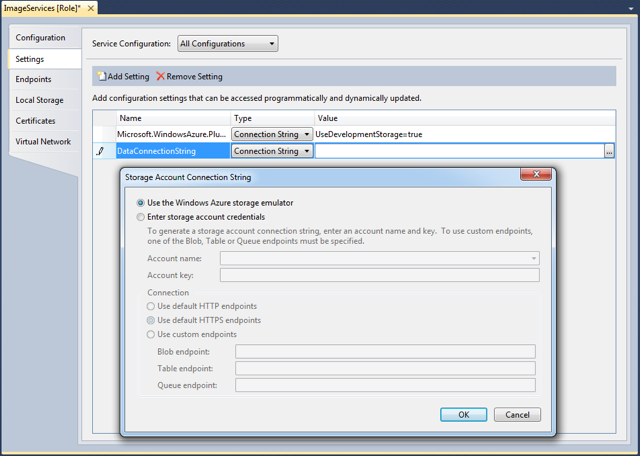 The next step is to create the service that will return a SAS to the application. Right-click on the ImageServices project in Solution Explorer and select Add > New Item, and then select the WCF Service template in the Add New Item dialog. Give the new service a name, UploadService.svc, and click Add to create the new service. Change the service interface to include a method called UploadUriWithSharedAccessSignature as follows:

This method accepts a single parameter which will be used to separate uploads from different users within Blob Storage. The method will return the Uri, complete with Shared Access Signature, of the Blob Storage container into which the application can upload files. The following code provides the implementation of this method, along with the private method InitializeStorage, which is used to load the cloud configuration information and create an instance of the CloudBlobClient class which is a wrapper class for working with Blob Storage. 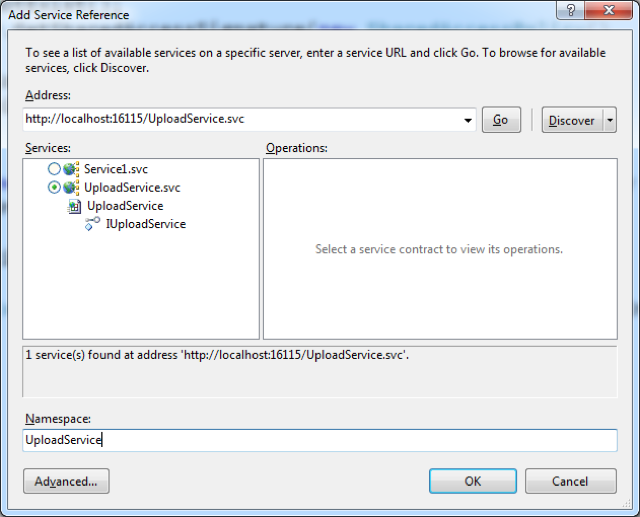 This will not only create the necessary proxy classes to wrap the calls to the UploadService, it will also create, and add to the Windows Phone project, a file called ServiceReferences.ClientConfig. In this file you’ll see the configuration information for the UploadService endpoint. You will need to adjust this to change it from pointing to the Visual Studio Development Server (the default) to the Windows Azure Compute Emulator. Typically this involves changing the endpoint address to http://127.0.0.1:81/UploadService.svc; although the actual port number may vary, so check to see what port number your service runs on when you run the ImageSharingCloud project.

The last step is to call the UploadUriWithSharedAccessSignature method to retrieve the SAS, which is then used to upload the photo to Blob Storage. The following code starts by calling this method, then when response is received, the photo is uploaded to Blob Storage using the CloudBlobUploader class. The full code for this class is available at the end of this post.

In order to run this application you will need to run both the ImageSharingCloud project and the ImageSharing Windows Phone project. Capture an image by clicking the Capture button, then click the Upload button. If this is successfull you should see a message displayed stating that the upload is complete. At this point you can browse the Windows Azure storage emulator and inspect the image that has been uploaded. The following code is the CloudBlobUploader class that is used in the final step of this tutorial. This can be reused in any application to upload content into Blob Storage.