You have to feel for poor Vincent Connare. A respected commercial photographer, he has a master’s degree in typography and has designed and hinted many world-famous fonts, including Trebuchet MS and Magpie.

But what do people say when they meet him? “Hey, you’re the Comic Sans guy, right?”

In reality, his work on Comic Sans was almost an afterthought; a solution to the issue of Times New Roman being a crappy font for a cartoon dog.

Since that time, we’ve seen the rise of a cottage industry dedicated to its suppression: 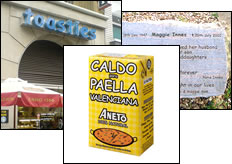 Unfortunately, as the Comic Sans Flickr group makes only too clear, this jolly but artless scrawl shows no sign of turning up its toes and dying. We see it used in more places than ever, from shop signage to product packagingto gravestones. In fact, as recently as July, Ascender Corp released a font pack designed for Office 2010, touting a new and enhanced version of Comic Sans.

The truth is, fifteen years after its birth, Comic Sans is still spreading like bird flu. The question is, why?

It’s tempting to give the pat designer answer: “Well, the great unwashed masses have no typographic training, and they know not what horrors they commit.” Then roll your eyes in mock disgust for effect.

But there has to be more to it than just bad taste. Why does Comic Sans resonate with so many everyday users? Is there anything we can learn?

A recent study at Carnegie Mellon University came up with some interesting and slightly disturbing findings on how user behavior seems to be influenced font choice.

In the study, college students were quizzed on embarrassing and/or unethical situations in which they’ve been involved in the past. It included highly sensitive subject areas such as drink-driving and cocaine use.

Version A of this survey was designed to look trustworthy and professional, with polished font choices and official university branding.

Version B adopted a lighter, fun, throwaway tone. It employed Comic Sans thoughout and made liberal use of modern TXT-speak, such as “How BAD are U???.”

When questioned before the survey, all users rated the official site as “more trustworthy” and “more professional.”

Amazingly, however, results indicated that users divulged almost twice as many intimate details to the Comic Sans survey than the more official page. Users also rated the same question as less intrusive when asked in Comic Sans. Something is allowing these users to lower their natural guard.

Sure, there are other factors feeding into this result. You could argue that the university branding gave people more reason to fear repercussions. Perhaps they were just more comfortable fibbing to Comic Sans.

Nevertheless, I think there are nuggets of truth we can take. We’re living in the age of Facebook and Twitter, and like it or not, for every finely crafted blog post or letter to the editor, there are a thousand throwaway tweets, IMs, or wall updates. That’s just what humans do.

Our first job as designers is to connect with users — to find ways to encourage their engaging with the site. Perhaps borrowing a lo-fi, consciously unpolished style in look and language might be the best way to make a connection — even if it means going with a design aesthetic you dislike.

So, here’s a scenario: You have a web site with a membership signup page. Membership numbers are tied directly to the amount of revenue the site generates.

If A/B split-testing revealed your membership sign-up page was twice as effective when presented in Comic Sans, would you do it?

Okay, I hear you. There must be a few warm and engaging alternatives that don’t make you want to staple your eyeballs?

One lesser known vein of support for Comic Sans has been the dyslexic community.

This means they usually appreciate a low-clutter, sans-serif font with long ascenders and descenders (that is, the stems on b and p). Comic Sans’s unaccountably virulent spread often made it the most likely font to fit the bill.

Happily, the momentum towards embeddable web fonts has now presented us with a few more options.

K-Type’s Lexia Readable is similar in spirit to Comic Sans but much more refined. Arguably, this is the font Vincent would have designed had he known it would become such a monster.

Lexia Readable is free for personal use and only $10 for a basic commercial license.

Joanne Taylor’s offering is compact and organic without ever straying into goofiness.

The other really handy aspect about Qarmic Sans is that it’s available through FontSquirrel.com‘s
service. Along with a standard TrueType version, they provide a browser-ready @font-face code, and alternate formats for iPhone and Internet Explorer.

I love this font. True, it’s not strictly a handwritten typeface, but it is loose, fun, and informal. Type designer Hannes Van Döhren created it specifically as a free alternative to Comic Sans, and it reminds me of the great Robert Crumb. Grab it.

During the research of the preceding article, I had a wow moment that I thought I’d share with you.

I mentioned that Comic Sans’s clarity and proportion often made it popular with people afflicted with dyslexia. I also noted an unconventional use of Comic Sans on a gravestone documented in the Comic Sans Flickr Group. The epitaph is signed “Paris Innes.”

On a whim, I decided to throw the name “Paris Innes” into Google, and it came back with some references to a 1991 book written by one Paris Innes.

The book is titled Defeating Dyslexia — A Boy’s Story.

Now, I have no way of confirming that this is the same Paris, but it would be a rather convincing explanation for the font choice.

Sometimes font selections are about more than pure style considerations.