How to Spice up Your Slack Channel with Hubot

Hubot is an open source CoffeeScript bot, that can monitor and respond to commands through a variety of chat room applications. As GitHub proudly claims, “it can help to dramatically improve and reduce employee efficiency” (depending how you use it). In this article we’ll get Hubot set up, integrate it with Slack, and show off both the improved and reduced efficiency we can enjoy from the fruits of our labor.

What Can Hubot Do?

The only limit to Hubot is your own imagination. However, it is important to realize that although you can do just about anything with Hubot, the bigger question becomes, should you? From posting images, translating languages, sending reminders of upcoming birthdays, to building a report of your team’s latest activity. Hubot has a plethora of abilities through a very robust message system and well placed hooks.

So let’s get Hubot up and running. For this, we’ll need Node.js installed, as well as npm (Node’s package manager). If you’re unsure how to do this, then check out our tutorial: A Beginner’s Guide to npm.

Next install the following packages globally:

You can do this with the following command:

Then, we’ll need to create a directory to house our new friend and run the aforementioned Yeoman generator.

If all has gone well, Hubot will pop up and ask you some questions. Enter your name, the new bot’s name and description. You can leave the adapter as campfire. Before exiting it’ll create a bunch of files. 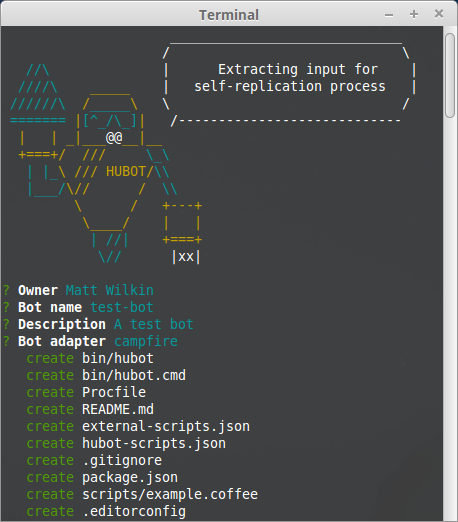 To see what your new bot can do, run:

So Hubot works. Feel free to play around some more before moving on to the next step.

Slack is a team collaboration tool which offers persistent chat rooms, as well as private groups and direct messaging. Slack is also SitePoint’s tool of choice to facilitate collaboration between its contributors, who are based all over the world. Let’s integrate our bot with Slack.

The first thing we need to do is install the Slack adapter in our project:

Once that is done, open your Slack Team page and go to the “Configure Integrations” area. Find the Hubot integration and click “Add”. Slack will ask you to designate a username for your bot. I choose Jarvis and Tars for the two bots I created for the Sitepoint Forum Staff.

Once the username is provided, Slack will create an account on your team with that username and assign it an API token. It is very important that you keep this API token a secret, so do not check it into your git repository. You’ll also have the option to customize your bot’s icon, first and last name, what it does, and so forth.

With the API token in hand, we can now start our bot locally using the following command:

This will log your bot into Slack so that you are able to talk to it there. Try it out by running the above command, visiting the #general channel (Hubot uses this by default) and issuing a command such as:

Note: Once you’re done experimenting locally, it is a good idea to move your bot somewhere more permanent (such as Heroku). There are plenty of good guides on how to do this and I won’t be covering it here.

Where to Find Pre-built Scripts

You can find a variety of scripts to pair with your Hubot at the npm website using the keyword “hubot-scripts”. All of these scripts can be added to your bot using the npm command with its --save parameter.

Let’s try it out with a script that fetches random cat images. What fun! Run:

Start the bot locally (as above), then visit #general and enter:

If all goes well, your bot should pull a random, yet amusing, cat picture from the Internet.

There are a lot of ways to reduce your efficiency with Hubot, from using pug bombs to building a script that randomly chooses a response (sometimes comical) when given a command. The latter, is the one that we’ll focus on in this article which is part of Jarvis’s programming.

I’ll illustrate this using the following script, named which-is-better.coffee. Place this file inside your scripts directory.

At the top of the script is our base template of comments. Here you can specify a description of what the script is intended to do, which dependencies it has and how it can be configured. It’s also important to include the commands that people can use to interact with your script.

A little further down, we find a line with module.exports = (robots) -> which is where your Hubot instructions will live.

The next part uses the .respond method to listen for a specific command directed at your bot. All of the hearing and responding methods take a regular expression as their input. When that regular expression finds an applicable match, the logic associated to the .hear and .respond commands is invoked.

In this case, I choose .respond, because I want Hubot to respond to a direct command. If I wanted it to respond even when the command isn’t directed at him, I would use .hear

The next statement chooses a random number 1 through 5. If the number chosen is greater than or equal to 3, it will use one of the responses stored in the uhh_what array to send to the user, otherwise, it will select the appropriate first or second option the user provided as part of its response.

To test this, start up Hubot using:

You’ll then be able to test out your script inside Slack using:

Or you can get a bit more creative as shown below. 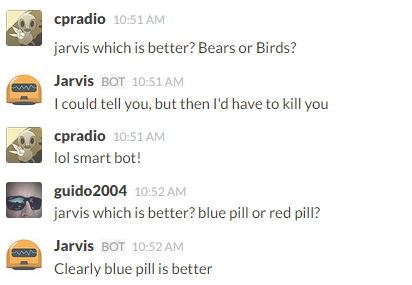 The main reason I implemented Hubot wasn’t necessarily to detract from valuable conversations, in fact, that is why Jarvis, our fun loving bot is restricted to our #random channel, but rather, I wanted to automate some tasks we staff use on a regular basis. With that goal in mind, Tars was born and he lives in the Team Leader private group to help us look up forum statistics.

One statistic every Team Leader needs to know is, who has been present recently and who hasn’t. Tars’ discourse.group.info.coffee script provides this insight.

Similar to the previous example, this one also has the comments filled out. This command is to be used by various members and knowing how to run the command is important. Secondly, there needs to be an environment variable configured for this command to function, so that is listed as well.

In this example, I simply need Tars to respond to a direct command of tars show {group_name} group info where {group_name} matches a group established in the Discourse forum (note: it must have a public page listing its group members for this to work).

The command then builds the URL to get the json feed from Discourse and loops over its dataset to produce an output similar to below.

Now any Team Leader can request a group’s information and see who hasn’t been active for a while and follow up with those members. Just like the prior script, you will need to start Hubot, however, we’ll need to add a new environment variable to the start script that contains the Discourse URL we plan to run our script against. For the sake of this article, let’s use Sitepoint’s Discourse instance.

Now in Slack you can execute the command:

Go on and Experiment!

Well that is Hubot in a nutshell. You’ve got the ability to integrate it with a multitude of adapters, a multitude of scripts, and you can even create your own using its API and a bit of CoffeeScript! So what are you going to create with it? Let me know in the comments below.