In this guide, you’ll learn regex, or regular expression syntax. By the end, you’ll be able to apply regex solutions in most scenarios that call for it in your web development work.

Regex, or regular expressions, are special sequences used to find or match patterns in strings. These sequences use metacharacters and other syntax to represent sets, ranges, or specific characters. For example, the expression [0-9] matches the range of numbers between 0 and 9, and humor|humour matches both the strings “humor” and “humour”.

Regular expressions have many real world uses cases, which include:

They may look complicated and intimidating for new users. Take a look at this example:

It just look like garbled text. But don’t despair, there’s method behind this madness.

In this guide I’ll show you how to master regular expressions but first, let’s clarify the terminology used in this guide:

To learn regex quickly with this guide, visit Regex101, where you can build regex patterns and test them against strings (text) that you supply.

When you open the site, you’ll need to select the JavaScript flavor, as that’s what we’ll be using for this guide. (Regex syntax is mostly the same for all languages, but there are some minor differences.)

Next, you need to disable the global and multi line flags in Regex101. We’ll cover them in the next section. For now, we’ll look at the simplest form of regular expression we can build. Input the following: 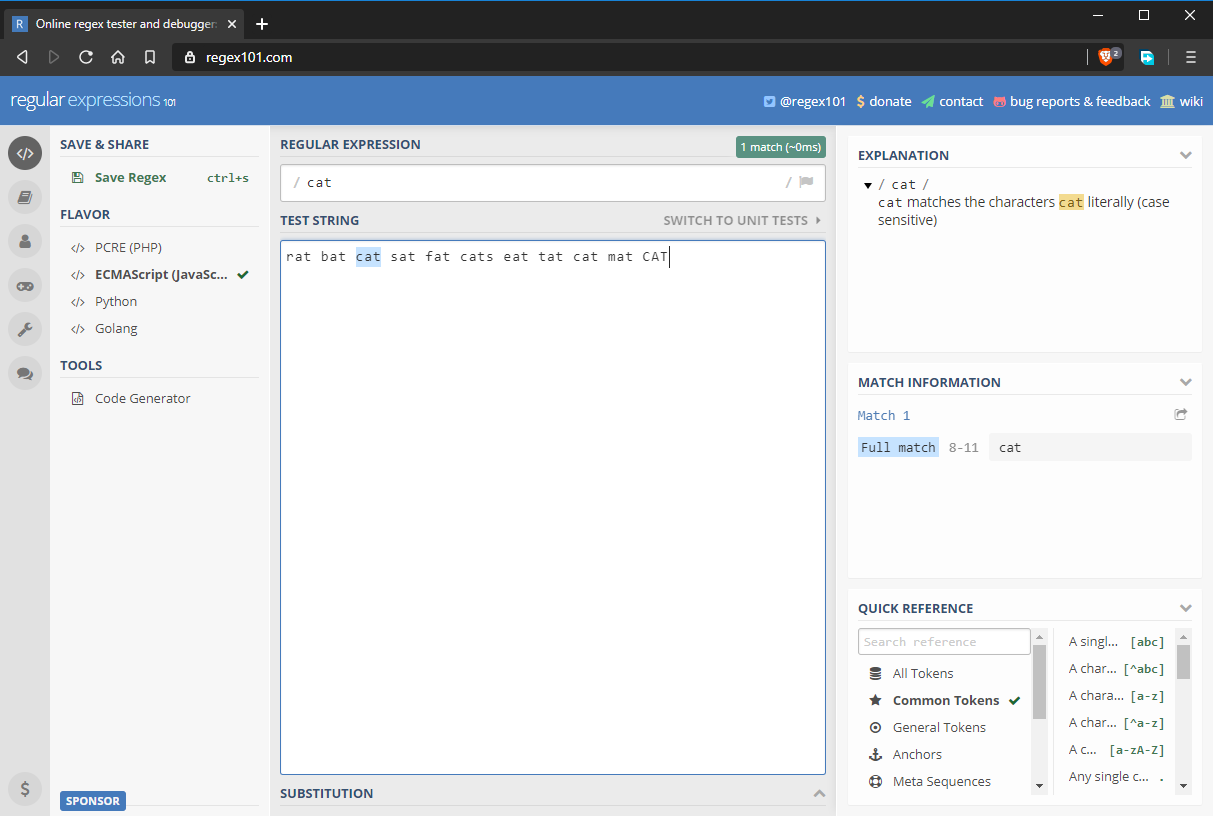 By default, a regex pattern will only return the first match it finds. If you’d like to return additional matches, you need to enable the global flag, denoted as g. Regex patterns are also case sensitive by default. You can override this behavior by enabling the insensitive flag, denoted by i. The updated regex pattern is now fully expressed as /cat/gi. As you can see below, all “cat” strings have been matched including the one with a different case. 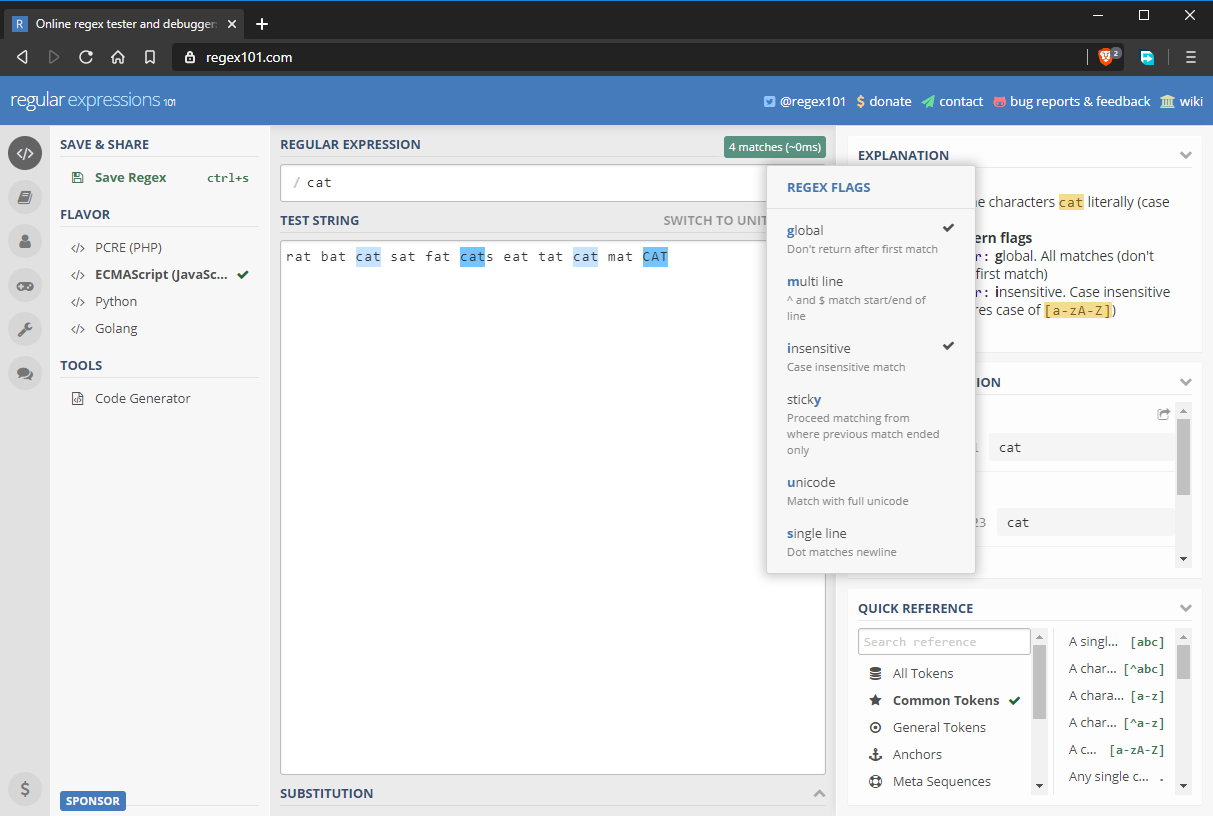 In the previous example, we learned how to perform exact case-sensitive matches. What if we wanted to match “bat”, “cat”, and “fat”. We can do this by using character sets, denoted with < brackets — code>[]. Basically, you put in multiple characters that you want to get matched. For example, [bcf]at will match multiple strings as follows:

Let’s assume we want to match all words that end with at. We could supply the full alphabet inside the character set, but that would be tedious. The solution is to use ranges like this [a-z]at: 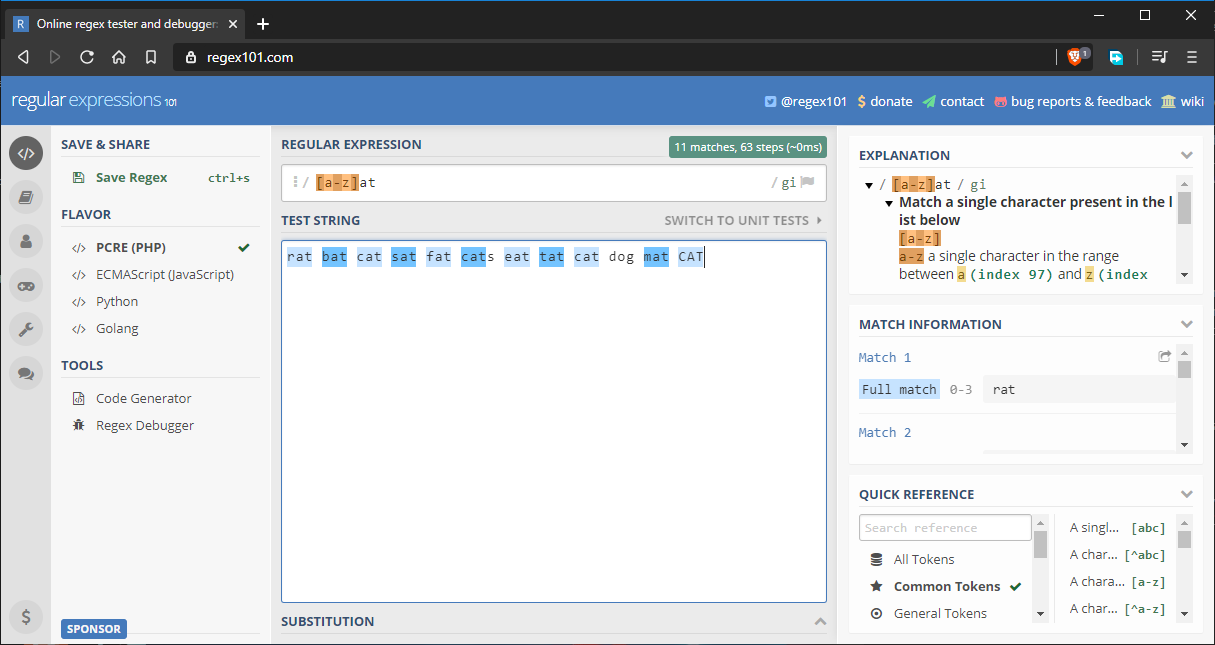 As you can see, all words are matching as expected. I’ve added the word dog just to throw in an invalid match. Here are other ways you can use ranges:

This would match all three-letter words. But what if you want to match a five- or eight-character word. The above method is tedious. There’s a better way to express such a pattern using the {} curly braces notation. All you have to do is specify the number of repeating characters. Here are examples:

Metacharacters allow you to write regular expression patterns that are even more compact. Let’s go through them one by one:

From what we’ve learned so far, we can write regular expressions like this:

From what we’ve learned so far, we can create an interesting variety of compact but powerful regular expressions. For example:

All the special characters we just mentioned only affect a single character or a range set. What if we wanted the effect to apply to a section of the expression? We can do this by creating groups using round brackets — (). For example, the pattern book(.com)? will match both “book” and “book.com”, since we’ve made the “.com” part optional.

Here’s a more complex example that would be used in a realistic scenario such as email validation: 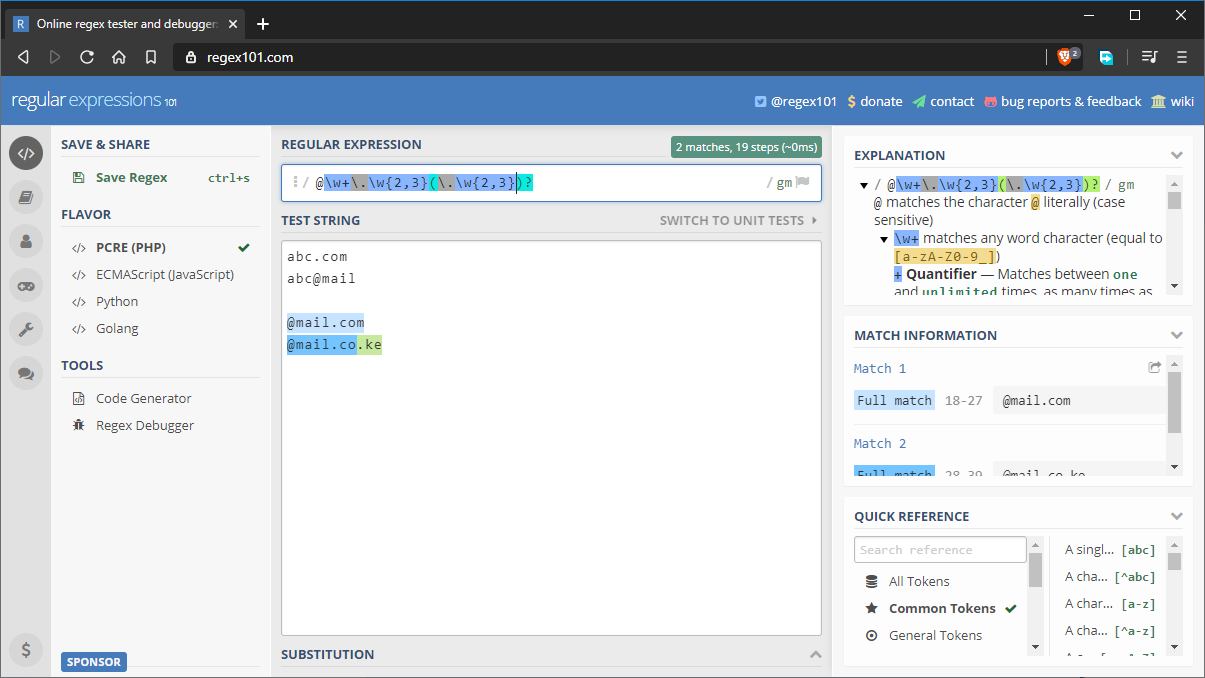 In regex, we can specify alternate characters using the “pipe” symbol — |. This is different from the special characters we showed earlier as it affects all the characters on each side of the pipe symbol. For example, the pattern sat|sit will match both “sat” and “sit” strings. We can rewrite the pattern as s(a|i)t to match the same strings.

The above pattern can be expressed as s(a|i)t by using () parentheses.

You may have noticed that some positive matches are a result of partial matching. For example, if I wrote a pattern to match the string “boo”, the string “book” will get a positive match as well, despite not being an exact match. To remedy this, we’ll use the following notations:

To fix the above situation, we can write our pattern as boo$. This will ensure that the last three characters match the pattern. However, there’s one problem we haven’t considered yet, as the following image shows: 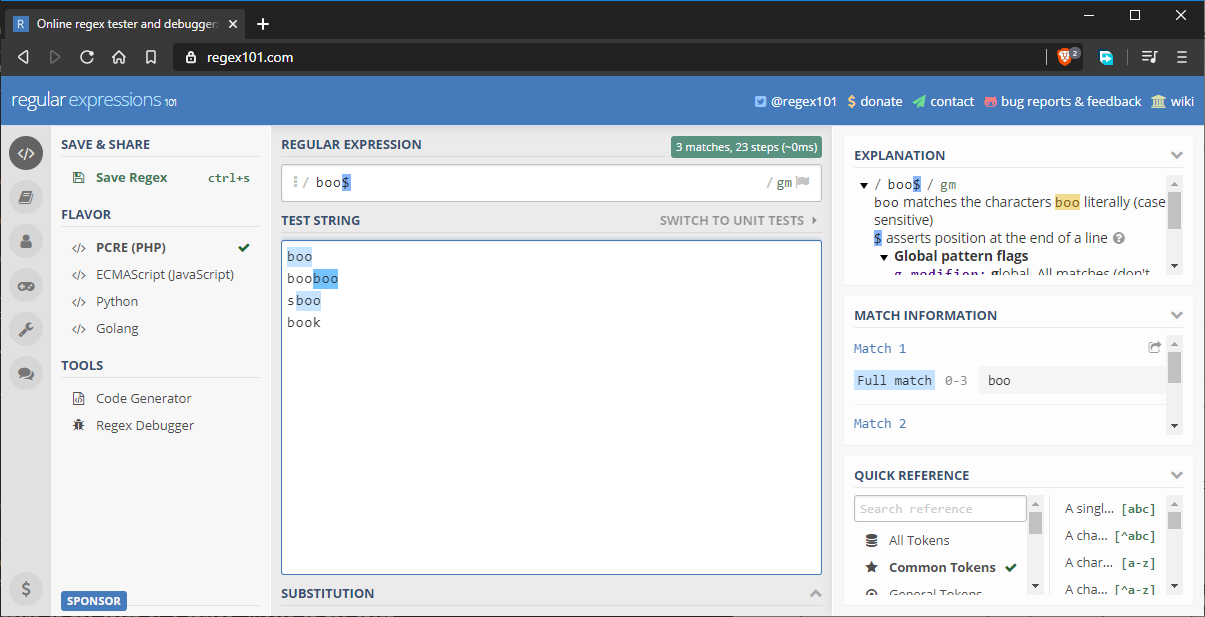 The string “sboo” gets a match because it still fulfills the current pattern matching requirements. To fix this, we can update the pattern as follows: ^boo$. This will strictly match the word “boo”. If you use both of them, both rules are enforced. For example, ^[a-z]{5}$ strictly matches a five-letter word. If the string has more than five letters, the pattern doesn’t match.

If you have Node.js installed on your machine, open a terminal and execute the command node to launch the Node.js shell interpreter. Next, execute as follows:

Feel free to play with more regex patterns. When done, use the command .exit to quit the shell.

As we conclude this guide, let’s look at a popular usage of regex, email validation. For example, we might want to check that an email address a user has entered into a form is a valid email address.

This subject is more complicated than you might think. The email address syntax is quite simple: {name}@{domain}. In theory, an email address can contain a limited number of symbols such as #-@&%. etc. However, the placement of these symbols matters. Mail servers also have different rules on the use of symbols. For example, some servers treat the + symbol as invalid. In other mail servers, the symbol is used for email subaddressing.

As a challenge to test your knowledge, try to build a regular expression pattern that matches only the valid email addresses marked below:

Do note some email addresses marked as valid may be invalid for certain organizations, while some that are marked as invalid may actually be allowed in other organizations. Either way, learning to build custom regular expressions for the organizations you work for is paramount in order to cater for their needs. In case you get stuck, you can look at the following possible solutions. Do note that none of them will give you a 100% match on the above valid email test strings.

I hope you’ve now learned the basics of regular expressions. We haven’t covered all regex features in this quick beginner guide, but you should have enough information to tackle most problems that call for a regex solution. To learn more, read our guide on best practices for the practical application of regex in real-world scenarios. 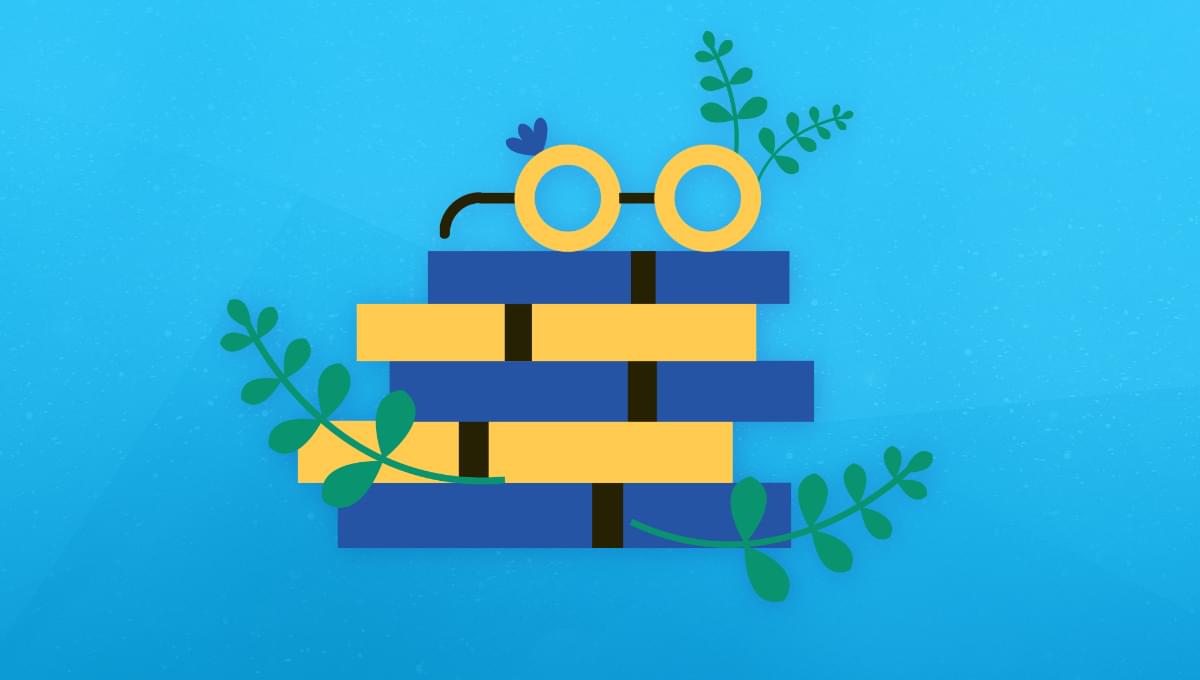