How to Simulate Mobile Devices with Device Mode in Chrome

Website testing has become increasingly complex. The days of checking functionality in a couple of browsers are long gone. Your latest masterpiece must be rigorously evaluated on a range of mobile, tablet and desktop devices with differing OSs, screen resolutions and capabilities. In extreme cases, it could take as long as the original development.

The process is complicated further by touch-screens, hybrid devices, and high-density displays. If you’re coding on a regular PC with a mouse and keyboard it’s difficult to appreciate how your masterpiece will operate. Features such as mouse hover won’t necessarily work and your application could be inoperable. But how can you test your system during development and avoid the pain of running and switching between multiple devices?

Fortunately, all modern browsers offer mobile emulation tools and one of the best can be found in Chrome. It can help identify early problems without leaving the comfort of your PC and development environment.

Start Chrome, navigate to the web page you want to test and open the Developer Tools (Menu > Tools > Developer Tools, Cmd+Opt+I on Mac or F12 / Ctrl+Shift+I on Windows and Linux).

You can now enable the browser emulator by clicking the Toggle device toolbar icon in the top-left:

A device simulation will now appear: 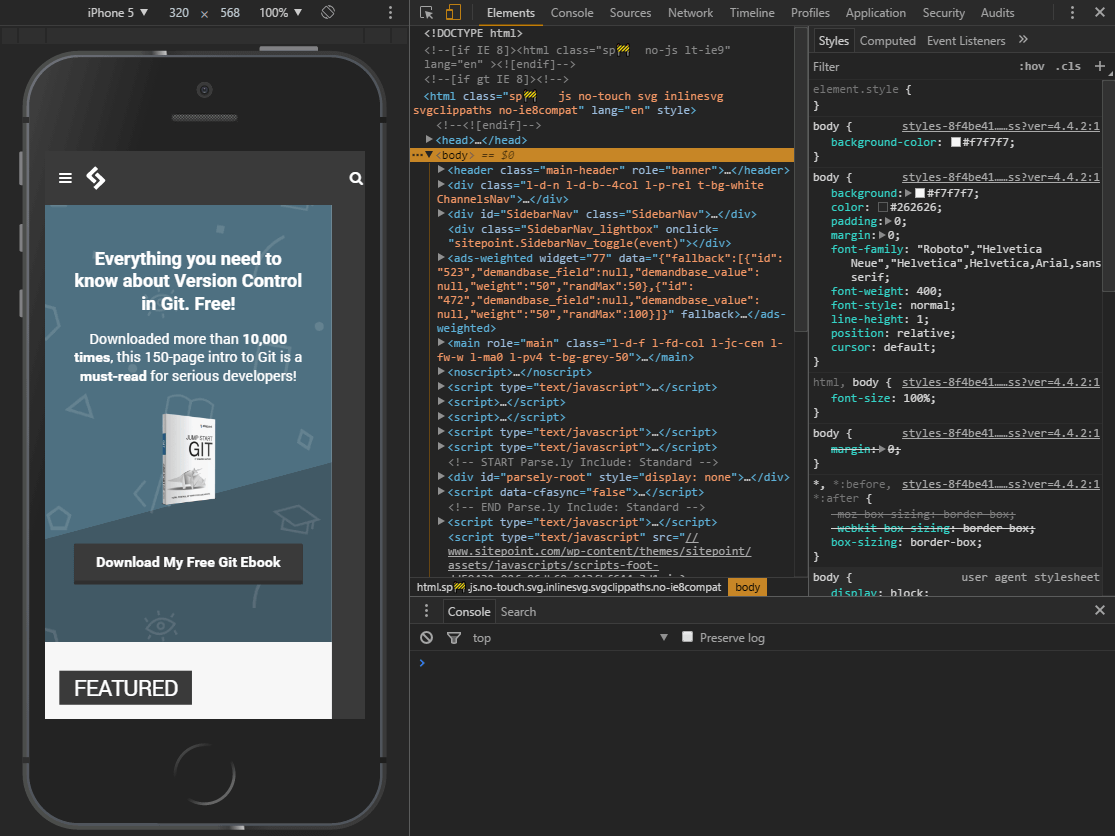 The dimensions of the emulated screen can be changed when Responsive is selected as the device type.

Move your mouse over the device to see a circular ‘touch’ cursor. This will react to touch-based JavaScript events such as touchstart, touchmove and touchend. Mouse-specific events and CSS effects should not occur.

Hold down Shift then click and move your mouse to emulate pinch zooming.

It’s worth spending a little time familiarizing yourself with the toolbar and menu above the mobile emulator:

The default controls are:

The three-dot menu allows you to show or hide additional controls:

The bar below the toolbar shows a range of typical phone, tablet and device sizes. This can be clicked when Responsive is chosen as the device to set that width.

Select Show media queries from the three-dot menu to view a graphical color-coded representation of all media queries set in the CSS.

Any bar can be clicked to set the emulator screen to that width.

The drop-down menu on the left allows you to select a device. Several dozen presets are provided for popular smart phones and tablets including iPhones, iPads, Kindles, Nexus tablets, Samsung Galaxy, etc.

Not all devices are presented at once – choose Edit… at the bottom of the device drop-down or select Settings from the Developer Tools menu (F1) and choose the Devices tab: 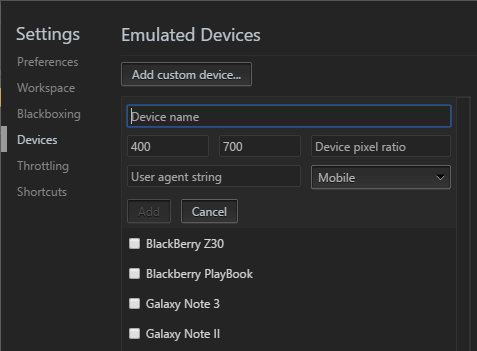 You can enable or disable devices or enter your own with by defining:

Note that all browsers identify themselves with a user agent string sent with all HTTP headers. This can be examined on the client or server-side and, during the dark days of web development, would be used to modify or provide a different user experience. In extreme cases, the viewer would be directed to a different site. The technique was always flawed but has become largely redundant owing to Responsive Web Design techniques and completely unsustainable given the number of devices available on the market.

The throttling drop-down allows you to emulate slow network speeds typically experienced on mobile connections or dodgy hotel and airport wifi! You can use this to ensure your site or application loads quickly and remains responsive in all environments. 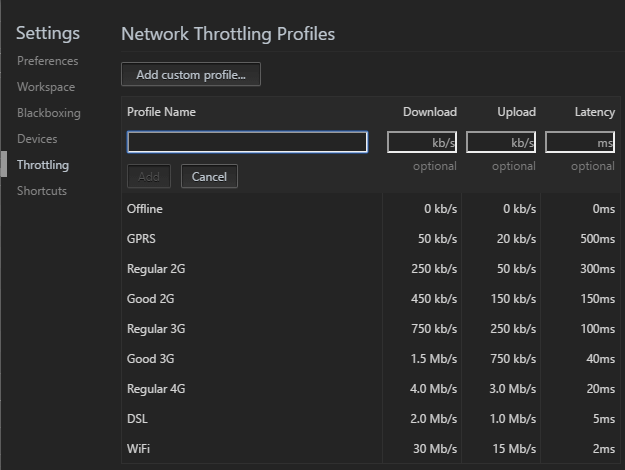 Smart phones and tablets often have sensors such as GPS, gyroscopes and accelerometers which are not present in desktop devices. These can be emulated in Chrome by choosing More tools then Sensors from the Developer Tools main three-dot menu: 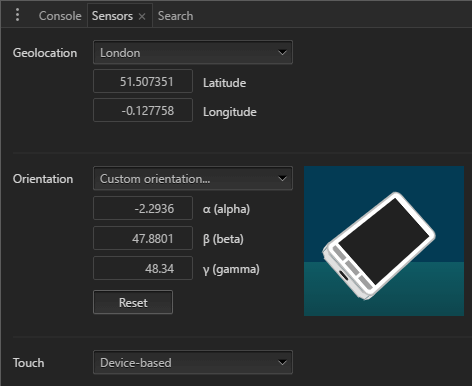 A new pane appears which allows you to define:

Finally, Chrome allows you to connect a real Android device via USB for remote device debugging. Select More tools then Remote devices from the Developer Tools main three-dot menu. Ensure Discover USB devices is checked then attach your phone or tablet and follow the instructions.

Chrome allows you to set up port forwarding so you can navigate to a web address on your local server on the device. Chrome’s preview pane shows a synchronized view of the device screen and you can interact either using the device or Chrome itself.

The full range of developer tools can be used including the Application tab to test Progressive Web Apps in offline mode. Note that unlike a real application which requires HTTPS, Chrome permits PWAs to run from localhost over an HTTP connection.

Chrome’s mobile browser emulator is useful and powerful, but it’s no substitute for interacting with your website or app on a real device to evaluate the full user experience.

You should also be aware that no device emulator is perfect. For example, Chrome shows a representation of the page on an iPhone or iPad but will not attempt to simulate the standards support or quirks of Safari.

That said, for quick and dirty mobile testing, Chrome’s device emulation is excellent. It’s far easier than switching between real smart phone and tablet devices and you’ll have all the developer tools at your disposal. It will save hours of effort.